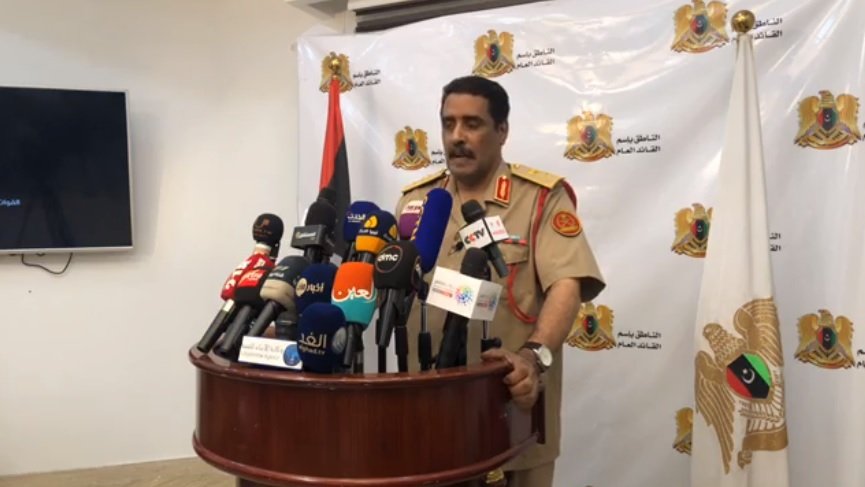 Head of the Libyan National Army (LNA) Field Marshal Khalifa Haftar, declaring Turkey as an enemy state of their force, has ordered his forces to attack Turkish ships and interests in the country, his spokesman Ahmed Al-Mismari said on Friday, accusing Turkey of being actively involved in battles.

“Orders have been given to the air force to target Turkish ships and boats in Libyan territorial waters,” said General Ahmad al-Mesmari, adding that “Turkey provided air cover using drones during the militia invasion of Gharyan city.”

The spokesman accused Turkey of helping Haftar’s rivals- the Government of National Accord (GNA)- seize the town of Gharyan, around 100 kilometers (around 60 miles) southwest of Tripoli.

Turkish strategic sites, companies and projects belonging to the Turkish state (in Libya) are considered legitimate targets by the armed forces.”

Mesmari added “all Turkish nationals on Libyan territory will be arrested” and “all flights to and from Turkey will be banned.

Anti-Haftar forces supporting Libya’s GNA announced Wednesday they had retaken the strategic town of Gharyan in a surprise attack, seizing the main supply base for Haftar’s months-long offensive.

Haftar on Saturday promised a “tough response” and accused militias backing the Tripoli-based Government of National Accord (GNA) of executing his wounded troops at the town’s hospital – allegations refuted by both the GNA and authorities in Gharyan.

After Hafter’s spokesman, Mismari’s statement, Turkish airplanes had to change all their routes. And also a drone belonging to Turkey was shot down by Hafter’s forces

The head of LNA forces, Khalifa Haftar confirmed that the operations of the national army are continuing until all military objectives are achieved and the country is liberated from armed and terrorist militias

The eastern-based LNA, led by Khalifa Haftar and supported by Turkey’s regional rivals Egypt, Saudi Arabia and other Gulf states, has accused Turkey of funding and arming Islamist factions in Libya fighting on the side of the Tripoli-based GNA.

Turkey has in May end, denied any involvement in the shipments of arms to Libya, which, if true, would mean it has violated an international arms embargo.

Turkey on May 18 sent a large shipment of military equipment to Islamist militias controlling Tripoli and fighting against LNA. Turkey had also been sending Islamic State (ISIS) militants by ship to Libya.

Libya has had a United Nations Security Council arms embargo imposed on it since 2011.

On 20th June 2019, Turkey has sold weaponry and equipment to the UN-backed Government of National Accord (GNA) in Libya to balance the civil war there, Turkish President Recep Tayyip Erdogan acknowledged

Pictures emerged last month showing that dozens of Turkish “Kirpi” armoured vehicles were delivered to the GNA. Khalifa Haftar, also claimed last month that Turkey had provided drones to their enemy in a bitter civil war that has divided the country into two camps supported by different international powers.

Once Turkey was exposed of supplying arms and helping GNA, Erdogan told a group of journalists, “We have a military cooperation agreement with Libya. We are providing to them if they come up with a request, and if they pay for it. They really had a problem in terms of defence needs, equipments.”

“Egypt and the UAE’s (Crown Prince) Mohammed bin Zayed are supporting Haftar’s forces. They were very strong in terms of equipment and drones. Now there is a balance after the latest reprisals. We will update the security agreement we have with Libya,” he added.

Turkey’s president said officials were coordinating the security assistance with the GNA through Turkish Defence Minister Hulusi Akar and the relevant intelligence agencies in both countries.

Turkey had supplied arms and assistance to GNA forces was in complete blatant disregard of the United Nations Security Council arms embargo on Libya.

Haftar, a retired general who had taken part in the revolt against Qaddafi, unleashed an offensive in May 2014 to purge Libya of Islamist Radicals, he branded “terrorists.”

Libya has remained beset by turmoil since 2011 when a NATO-backed uprising led to the ouster and death of President Muammar Gaddafi after four decades in power.

Libya now appears as a patchy composition of hundreds of militias, mainly allied, yet not exclusively, into two coalitions: the first surrounding the Government of National Accord led by Fayez al-Sarraj (wanted by the United Nations); the second surrounding field marshal Khalifa Haftar

In an interview in June, Field Marshal Khalifa Haftar talked at length about his military operation and his war on terror, the dismantling of militias He had said “The military operation takes aim at inexecrable realities that could not be addressed by any other means. Such realities include: the presence and spreading of terrorist leaders, and their recruitment activities through cells inside Tripoli, the presence and spreading of militias, and their control over the funds that belong to the Libyan people at the Central Bank of Libya, as well as their practice of highway robbery, kidnapping, blackmail, the growing of activities by criminal groups, organized-crime gangs who trade in human beings, and the smuggling of oil and fuels, and also the presence of groups of politicized Islam that sabotage political life and spoil its atmosphere, and even implement foreign agendas that conflict with the interests of the Libyan people.

This is the part that we aim at with our military operation, anything else, the Libyan people will find solutions for, using dialogue and discussion, through peaceful, political, and democratic means.”

In regards the recent Islamist Radical militias attacks in Libya, The Libyan National Army War Information Division stated: “We strongly condemn the brutal terrorist bombing of civilians in the Aziziya district by armed terrorist militia planes that were launched from the secondary airfield in Misrata”, adding: “Our response will be very harsh on these terrorists, in order to ensure the protection of civilians and avoid the recurrence of such an attack.”

Arab World is distancing itself from its Ottoman Past