Use Your Wallet Power to stop Chinese Aggression: Sonam Wangchuk 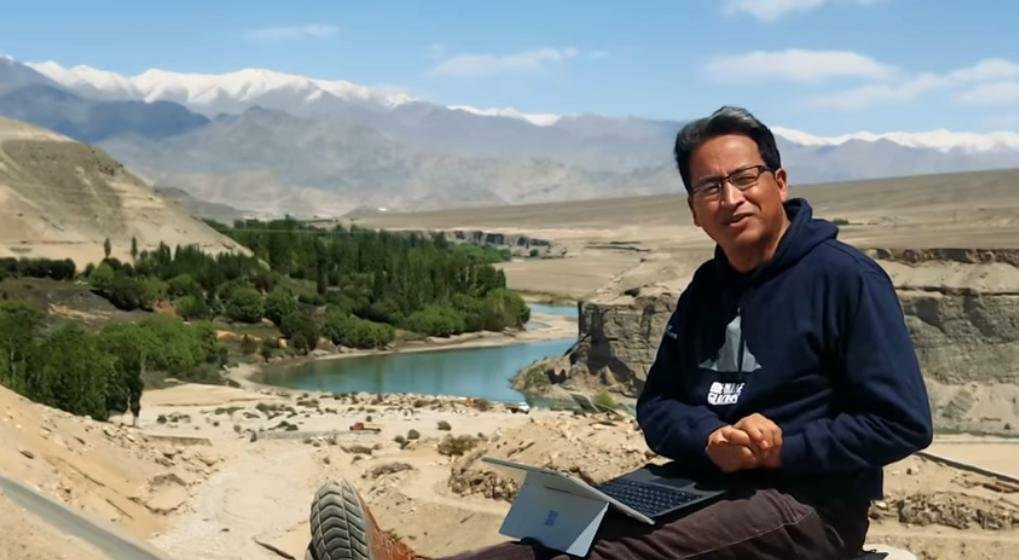 Use Your Wallet Power, #BoycottMadeInChina #SoftwareInAWeekHardwareInAYear to stop Chinese Aggression, said the Noted innovator and Ramon Magsaysay and Rolex Awards winner Sonam Wangchuk on Saturday appealing people to boycott everything “made in China”.

In a video message from Sonam Wangchuk to “Use Your Wallet Power” circulated all over the social media platforms including the Whatsapp.

Complete Transcript of the Video Message from Sonam Wangchuk

“Some people would know us from our work from reforms in education sector, or environment protection works like Ice Stupa (artificial glacier) work, or for global movements like I Live Simply that encourage people to adopt simple lifestyle to prevent climate change.”

“Today i am not going to talk about the initiatives mentioned above, but i have come to give you an important message about the situation or tension and collision that has developed between India and China these days and what is your responsibility as a global citizen.”

Set in Leh with the Himalayas and river Sindhu in the backdrop, Wangchuk sits on a stone in his video message. He said, “I am in Ladakh (India) and you can see the river Indus flowing.” Pointing towards mountains he said, “beyond these mountains are areas of Nobra and Changthan where tension is increasing. Thousands of soldiers have been taken over there. I have heard China has placed Air force jets there. And an hour ago Indian Air force jets were hovering over me.”

“Normally when there is tension on the borders, we people take sound sleep with notion that soldiers on the border would respond to it. I want to tell you an important thing. This time we want two fold response. Along with a soldier’s response there should be citizen’s response to the Chinese aggression as well,” he says. “What would people like you sitting in Delhi, Mumbai, Bangalore and other cities in the world would do in such a situation? To understand this, you have to understand the Chinese mischief and why China is doing it,” the Magsaysay award winner innovator adds.

“For past few weeks, It is not only with India that China is doing this (showing its aggression on Indian Border). China is aggressive in the South China Sea and is creating issues with Vietnam, Taiwan and even Hong Kong. My understanding for the reasons behind this aggression is that, more than enmity with any particular country, China is doing it to solve its internal problems. China today fears its own people, 1.4 Billion Population that is working like bonded laborers without any human rights working for the Fascist/Dictatorial Chinese government and making the CCP officials rich. If these 1.4 Billion people get angry, it can turn into a people’s revolution and China fears most the revolution within from its angry citizens.”

“Today because of the Chinese Corona Virus, the factories in China are closed. Exports are stopped. Unemployment has almost jumped to 20%. Citizens in China are very angry, there can be a revolution, the Chinese Communist Party can be toppled by the citizens of China. That is why China wants enmity with its neighbors to keep its people united,” Wangchuk adds.

China is not doing it for the first time. In 1962 when China started a war with India, that was also to unite its public when there was a famine for previous 4 years and many starvation deaths happened. To divert the attention of its public from the Chinese Government’s failure China initiated a war against India in 1962.

For China it is very essential that China continues to grow its GDP. The day the Chinese GDP declines, Chinese public is ready for a public revolution. .

I would say at this time, compared to India’s bullet power, wallet power (of public around the world) would help a lot, the money that people spend on buying Chinese products.

“Just imagine we (Indians) killing the Indian Industry, from idols to cloths, buy 5 lakh crore (Approximately $66 Billion) worth goods from China every year and it is this money that is used to buy weapons including guns by China, which is used against our own soldiers. This money can be the cause of Martyrdom of our Indian Soldiers. If 1.3 Billion Indians in India and 30 million Indians living abroad start a #BoycottMadeInChina movement, maybe the World will join India, given the anger against China. “

Once the whole world joins India in #BoycottMadeInChina movement at a large scale, maybe China’s worst nightmares may become true i.e. China’s economy collapses and Chinese public would become angry and they might stand in opposition of the Chinese Fascist/Dictatorial Government in protests and topple the Communist government there.”

“If we will not be part of this movement to boycott made in China it would be tragedy for us. On one hand, our army is fighting China and on the other hand, we, you and me, are buying Chinese goods from mobile phones to computers, from cloths to toys and thus sending money to Chinese army.

This was on the hardware side”, he said. He said, “On the other hand our youth are downloading Chinese software, games, apps like TikTok and other Chinese apps sending Millions of US Dollars to China. “That is why it is very important that we prepare a Citizen’s response and make #BoycottMadeInChina a Global movement. #BoycottMadeInChina movement will also be a boon for India as it will bring self-reliance in India.”

Prime Minister Minister Narendra Modi’s vision of ‘Swavlamban’ i.e. self-reliance. It will be possible only when our own Industries grow and develop. When we boycott made in China products, use the products manufactured in India, it will give employment to Indian workers and laborers, whole country will be prosperous. There will be enough budget with the Government to respond to Chinese aggression in a more effective way on the Indian Border.

“For this i appeal everyone. As far as apps and software are concerned, our youth should uninstall all Chinese apps in one week. #BoycottMadeInChina #SoftwareInAWeekHardwareInAYear should be a movement. It will take time for finding alternatives to Chinese hardware. Hence we need to give it the time of one year to Boycott until alternatives are found. We should not only pledge ourselves to #BoycottMadeInChina #SoftwareInAWeekHardwareInAYear but also educate 100 more people around us, share on social media, spread this message to every corner of the country and the world. As soon as the impact of this action will be seen over the internet where the downloads in millions are uninstalled, right message will be delivered to China. That is the only way, we can force China to a table where we can discuss peace.”

“At the End, i will tell you what i am going to do.” He points to his phone and says, “On this phone whatever Chinese Apps are there on this phone, i am removing all Chinese apps in one week. This phone that is made in China, this phone also i am doing it away from my life. In one year, everything that has “Made in China” tag, i will remove it from my life.”

“We do not have any issues with China and the Chinese people. We have problems with Chinese Fascist/Dictatorial Imperialist Communist government and their ways of working. As long as the Communist Government in China is not toppled, We will have to do this. I appeal everyone in every city, to organize such events where people en masse pledge that they will boycott the made in China products as long as the Communist regime continues to run China.”

“I have been telling this since years, that in 21st Century you don’t have to give life for the nation, you need to give life to the nation. Everyone should perform their role well. Jai Hind!!”

Will the International Community and Citizens around the world understand the Chinese threat and understand the concepts of “Use Your Wallet Power, #BoycottMadeInChina #SoftwareInAWeekHardwareInAYear” to stop Chinese Aggression?

Is this only the duty of the Citizens to #BoycottMadeInChina #SoftwareInAWeekHardwareInAYear”? Should the Governments around the world not ban completely the Chinese imports? If there is no Chinese products available in the market, innocent citizens will not buy it in the first place. Can tough rules ignoring the WTO and other Chinese lapdog organizations be drafted to prevent Chinese imports in all concerned countries? Can Governments ban download of Chinese apps, games, software in their respective countries?

It is not an unfair trade practice to ban Chinese imports, it is to correct the Fascist, dictatorial, Imperialist, Monster Chinese Government that has killed over a million innocent civilians around the world by spreading the Chinese Corona Virus and intends to invade the entire world.

You can be just to a person who believe in Justice and equity. You cannot be just to a Monster that will ultimately eat you up.