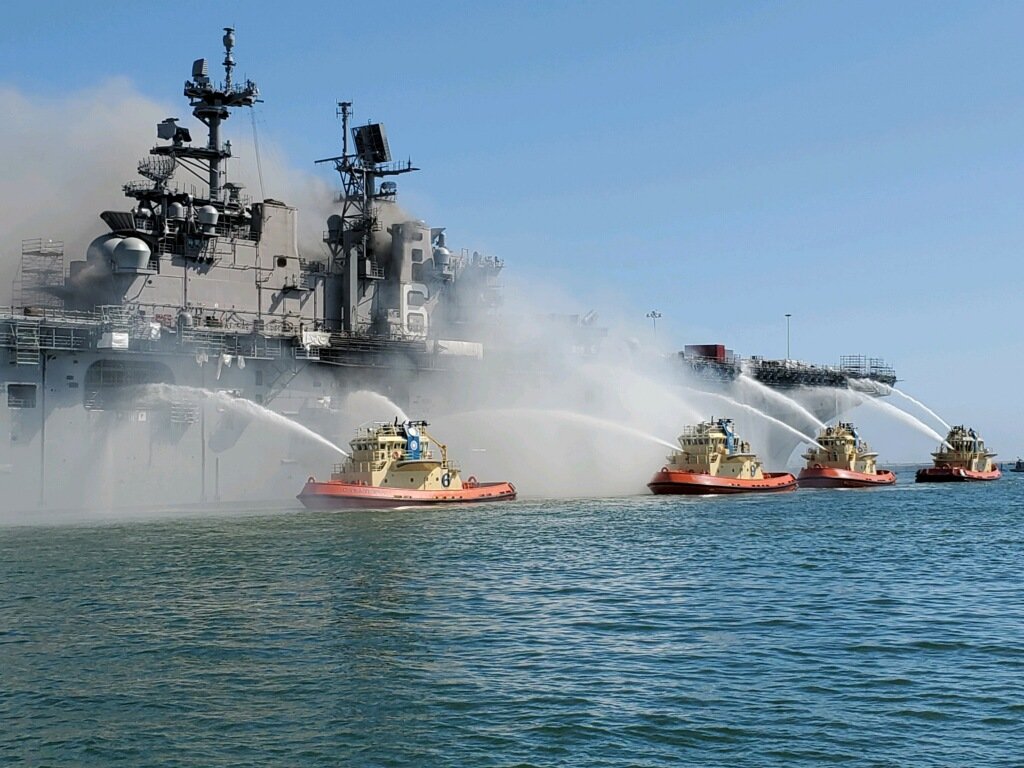 USS Bonhomme Richard is on fire after an explosion and Three-Alarm Fire. Twenty-one people suffered minor injuries in an explosion and three-alarm fire Sunday on board a ship at Naval Base San Diego, military officials said.

The fire was called away at approx. 8:30 AM, July 12 on USS Bonhomme Richard, said Mike Raney, a spokesman for Naval Surface Force, US Pacific Fleet.

Seventeen sailors and four civilians were hospitalized with “non-life threatening injuries,” Raney said in a brief statement. He didn’t have additional details.

Previously officials said at least one person was treated for smoke inhalation.

The cause of the fire was under investigation. It wasn’t immediately known where on the 840-foot amphibious assault vessel the blast and the fire occurred.

The flames sent up a huge plume of dark smoke visible around San Diego.

San Diego is the Bonhomme Richard’s home port and it was undergoing routine maintenance at the time of the fire.

About 160 sailors and officers were on board, Raney said—far fewer than the thousand typically on the ship when it’s on active duty.

The USS Bonhomme Richard, a Wasp class landing helicopter dock (LHD) amphib assault ship, which can deploy and land helicopters, smaller boats, and other vehicles. spent six years in Japan as part of the U.S. Forward Deployed Naval Force before it was sent to San Diego in 2018.

Two other docked ships, USS Fitzgerald and USS Russell, were moved to berths away from the fire, Mr. Raney said.

“Federal Fire is rotating their crews aboard the ship with US Navy firefighting crews from the waterfront to fight the fire in order to, find the seat of the fire and extinguish it.

Navy Region Southwest tugs are also continuously combatting the fire from the bay”. The origin of the fire is still unknown and is pending investigation.

There was a report of Fire Fighters transitioning to defensive operations & evacuating the ship. If they are going defensive, the fire has to be very significant.

Sabotage at this stage cannot be ruled out. Investigation is still on.

This fire comes at a time when the tensions are brewing up with China in South China Sea.

A common misconception is that a “3-alarm fire”, for example, means that three firehouses responded to the fire. This is not the rule behind the naming convention, although some cities may use the number of firehouses responding for multi-alarm designations because that is the simplest way to determine an alarm number.

The most widely used formula for multi-alarm designation is based on the number of units (firetrucks for example) and firefighters responding to a fire; the more vehicles and firefighters responding, the higher the alarm designation. (Note: In most cities, a “unit” can be anything from a tanker or ladder truck to rescue vehicles to even cars driven by the chief and deputies.)

With this unit/firefighter alarm designation, the initial dispatch is referred to as a “first alarm” and is typically the largest. Subsequent alarms are calls for additional units, usually because the fire has grown and additional resources are needed to combat it, or because the incident is persisting long enough that firefighters on scene need to be relieved.

Requests for units and firefighters from outside jurisdictions do not normally occur in multi-firehouse urban areas until elevated alarms are reached (alarm three and above), but will depend on the location of the incident and the condition of the authority having jurisdiction at the time of the incident.

Previous Article : Everything Fake is Made in China: Companies Losing Billions of Dollars