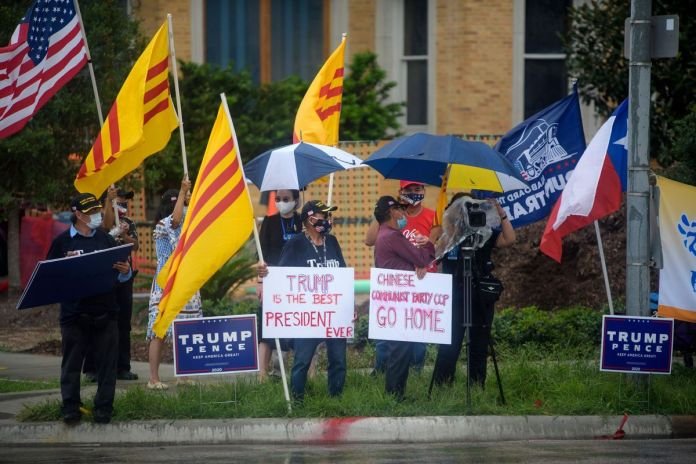 Friday morning, about 100 protesters of protesters from different persecuted groups protested outside the consulate, declaring a victory of sorts over the closure. They shouted “take back China,” denounced the ruling Chinese Communist Party (CCP) and waved flags as consulate workers loaded belongings into rental trunks.

Related Article US Orders Closure of Houston Consulate for Spying, China Tries To Link It With Wuhan

Among the protesters, Zhony Yi Ma, 34, traveled to Houston with a group from New York to celebrate the victory of closing down the Chinese Consulate.

“We want to end the CCP, take back China and build a nation like America,” he said.

Other protesters included a group of supporters of the Falun Gong spiritual group, which is banned in China. Tao Peng, 48, stood silently holding banners calling for an end to communism.

A medical research scientist from Houston, she said the CCP infiltrates groups and cannot be trusted.

“I grew up in mainland China and have seen how the CCP lies,” she said as a Falun Gong hired truck circled the area emblazoned on its sides with “Freedom from Communism, and God Bless America.”

China revoked the license for the US Chengdu Consulate

In a diplomatic low, in retaliation to US closing down Houston Consulate, China revoked the license for the Chengdu consulate.

A statement from the Ministry of Foreign Affairs said US diplomats in China had been notified Friday morning that Beijing was revoking the license for the Chengdu consulate in China’s southwest, which has been ordered to “stop all business and activities.”

“The current situation between China and the United States is something China does not want to see, and the responsibility rests entirely with the United States,” the foreign ministry hiding its own crimes and malicious activities in the United States said. “We once again urge the US to immediately revoke the erroneous decision to create necessary conditions for the return of bilateral relations to normal.”

Wang added that closing Chengdu was a “legitimate and necessary response” to the US demanding that the Chinese consulate in Houston be shut. US officials have made similar accusations about Chinese diplomats acting beyond their duties and engaging in espionage related activity.

US diplomats have not been working from the Wuhan consulate already for several months now, having evacuated early in the coronavirus pandemic. Attempts to return to work were stymied by China’s insistence that diplomats undergo coronavirus testing on arrival, potentially exposing their DNA to the Chinese security services, rather than provide a negative test result.

“If China had closed the Wuhan consulate, the matter might have ended there because the issue in Wuhan was China preventing US diplomats from returning to China after the Covid-19 outbreak,” he said. “That could have been resolved over time as tensions cooled.”

Effectively, this means that two US consulates in China will soon be out of action while only one Chinse Consulate in the United States is closed.

US President Donald Trump has suggested he might order the closure of more Chinese consulates, with some officials and the FBI linking the diplomatic outposts to espionage and IP theft by China in the US.

Related Article : Securing Our Freedoms From The Chinese Communist Party Is The Mission Of Our Time : Mike Pompeo

Chinese Biologist Tang Juan, who hid her ties to the People’s Liberation Army when applying for the VISA is arrested

A Chinese Biologist whom China’s consulate in San Francisco was harboring, to avoid visa fraud charges and avoid her arrest, has been arrested and is now in American custody. She will appear in court Friday, a US Justice department official said.

An official said, “Tang Juan, who hid her ties to the People’s Liberation Army when applying to undertake cancer treatment research at University of California-Davis, is in US custody”. We covered about her hiding in San Francisco consulate in our previous article : Chinese Industrial Espionage In USA : Department Of Justice says China Is Harboring Wanted Chinese Military Researcher Linked with VISA Fraud At Its San Francisco Consulate

The official did not say how Tang emerged from the consulate, but noted she did not have diplomatic status that would protect her from criminal charges.

On her visa application, she answered “no” to questions about whether she had served in the military or was a member of, or affiliated with, a communist party.

The FBI said it later found pictures of her in uniform with insignia for the PLA “civilian cadres,” and identifying information describing her as an associate researcher at a Chinese air force hospital.

If convicted, Tang faces a maximum statutory penalty of 10 years in prison and a fine of $250,000.

Tang’s arrest for alleged visa fraud follows those of three other Chinese researchers in California and Indiana. The arrests were described as “a microcosm of a broader network of individuals in more than 25 cities,” the Justice Department official said.

“By their very nature consulates are a base of operations for foreign governments to the United States, including their intelligence services and it’s understood that there will be some activity here by those services,” the person said.

“But because of their location within the United States and their status of sovereign territory of a foreign country, they can be exploited and the espionage and influence activities run out of a consulate can rise, ultimately to a level that threatens our national security,” the person added.

Nhat Nguyen, 58, praised U.S. President Donald Trump and accused Chinese communists of spying around the world. He wore a Trump 2020 campaign hat and waived the former flag of the South Vietnamese government that was backed by the United States against the communist North in the 1960s-70s era Vietnam war.

Videos and social media was filled with such videos and messages.

Shortly after the 4 p.m. (2100 GMT) deadline to close the consulate, a group of people were seen using power tools and a crowbar to force open the rear door. After the men went inside, two uniformed members of the U.S. State Department’s Bureau of Diplomatic Security arrived to guard the door.

Houston is a major medical hub known for top-notch research on cancer, infectious diseases and since the pandemic hit this year, vaccines for the coronavirus, which first emerged in China late last year. The city is also home to dozens of oil and gas producers that develop technologies used around the world.