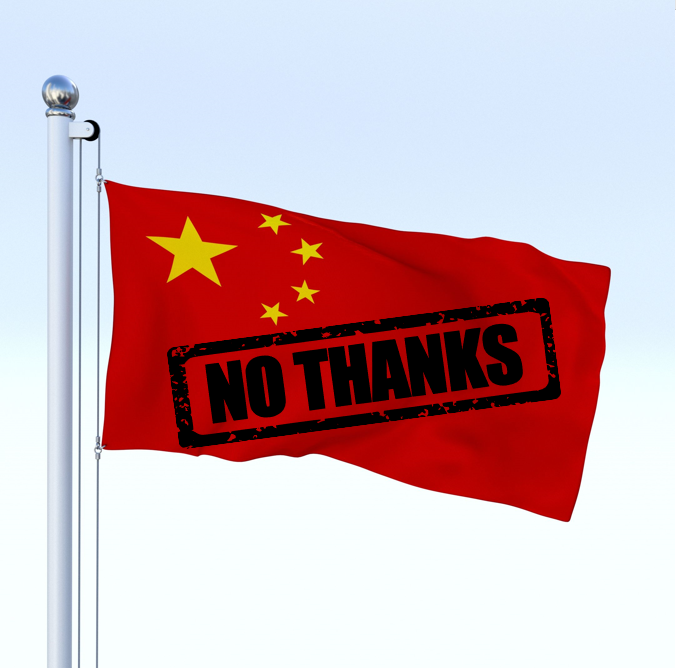 Indian Mantra of Self-Reliance, in Indian Language they say, “Atmanirbhar Bharat” is coming as a big blow to the Imperialist, Bio-Terrorist, Belligerent, Fascist China.

The government is fast-tracking measures to cut down on Chinese imports. The commerce ministry has identified 371 items such as toys, steel tubes, steel bars, consumer electronics, telecom items, heavy machinery, paper, rubber articles and glass, among others that would be brought under the mandatory Indian Standards (IS) regime by March 2021.

This step of Indian Government will put a stop on imports of cheap and sub-standard items from China that has killed Indian Industry with cheaper sub-standard items and rendered millions of Indian workers working in those sectors jobless over past few decades. It may be noted that the commerce ministry identified these items last year and some officials say the process to implement import curbs have been expedited in line with the ‘Atmanirbhar Bharat’ initiative.

Readers should note that China calculated this loss as $6 Billion by mere banning Tik Tok. Loss to other Chinese companies that owned other 58 applications is not known at this moment. Communist Chinese CCP mouthpiece tweeted and accepted the loss.:-

Besides banning the above Chinese Apps, Indian Government has also prepared a list of 275 Chinese apps including PubG that it will examine for any violation of national security and user privacy, signalling heightened scrutiny and the possibility of more Chinese internet companies being banned in the country

The growth of India’s personal protective equipment (PPE) sector from zero before March, to 1,50,000 pieces a day by the beginning of May, is considered as a fine example of a self-reliant India. The PPE industry in India has become a ₹7,000 crore (US$980 million) in two months, the second largest after China.

The largest fund in the country worth ₹21,000 crore (US$2.9 billion) was setup by the IIT Alumni Council with the aim of supporting the mission towards self-reliance.

India’s own ‘Made in India’ 5G network was also announced in July 2020 by an Indian MNC, Reliance Jio. Mukesh Ambani of Indian Giant MNC Reliance announced in mid-July “Jio has created a complete 5G solution from scratch, that will enable us to launch a world-class 5G service in India, using 100 per cent homegrown technologies and solutions”.

For the first time, in July 2020, it was announced that Apple would manufacturer one of their premium I-Phone models in India.

Under the initiative of Atmanirbhar Bharat, India plans to reduce its non-essential imports and increase exports.

Quoting Bureau of Indian Standards (BIS) director general Pramod Kumar Tiwari, most of the 371 items listed are Chinese products. “We are framing mandatory standards for these items and to improve the enforcement including at government-owned ports like Kandla, JNPT and Cochin,” he said.

Tiwari added that the timeline for notifying such standards will be in place by December for most of the products and by March 2021 for the remaining ones.

While the idea is to eliminate sub-standard imports, it seems that the move is directed towards importing as less as possible from China.

With this, the government will put a curb on the import of sub-standard goods, which largely come from China.

In addition to this, Consumer Affairs Minister Ram Vilas Paswan launched BIS website and mobile app (BIS-Care) to check the authenticity of ISI and hallmark products. The ministry has approached BIS to make mandatory standards. The BIS chief said the norms will be in place by December for most of the products and the rest by next year in March.

Meanwhile, BIS officials have also ramped up surveillance of products by visiting factories and markets. Paswan directed BIS to carry out stringent market surveillance to examine packaging standards – like country of origin, MRPs, manufacturing dates, expiry date, among others.

With this smart move of setting Indian standards for all the products, India has avoided any World Trade Organization China favoring rules. Chinese cheap and substandard products can now be denied taking the plea of the goods being substandard and not as per the quality.

As per sources, with the combination of all the steps including the banning of Chinese Apps and Software as well as banning sub-standard imports from China, India will be denying China revenue of a whooping over $50 Billion per year with a few of these steps alone. Besides that, the money saved will be invested in Indian Industry and make it self reliant under “Atmanirbhar Bharat” initiative and further have higher productivity to become capable of Exports as well. Experts say that $50 Billion per year is more than the total Chinese investment in Pakistan and China is going to lose this big money from India alone every year.

As per sources, Chinese Wuhan Corona Virus and Chinese aggression at Indian Border that killed 20 brave unarmed Indian soldiers by the Chinese PLA armed with Rods studded with Nails were the two main events that has brought a paradigm shift in the Indian thinking.

What if the Entire world Joins this Campaign of Self-Reliance?

U.S. goods imports from China totaled $539.5 billion in 2018, up 6.7% ($34.0 billion) from 2017, and up 59.7% from 2008. U.S. imports from were up 427% from 2001 (pre-WTO accession). U.S. imports from China account for 21.2% of overall U.S. imports in 2018. If US can cut down imports by $400 Billion a year, that money can be invested in the United States and can create more employment opportunities that the Democrats had given hope of bringing back those jobs to the United States. President Trump is also following the same mantra of self-reliance and taking effective measures against China and soon the impact of #BoycottChineseProducts will be visible on the beligerant China.

Experts validate Indian Prime Minister Narandra Modi’s view and say, “If India alone can cause loss of over $50 Billion a year to the Chinese exchequere, What if Europe, US, Australia, entire South East Asia join this super league and ban Chinese software, apps and Cheap substandard Chinese products and instead invest that huge money in their respective economies creating more jobs for their own citizens rather than sending jobs to China?”

Will USA and India take the initiative to bring in all the allies to follow the mantra of Self-Reliance? Will USA, Japan, Australia India alliance be able to pull African nations out of the Chinese Debt Trap and prevent from becoming as colonies of the Imperialist Chinese Empire?

What is the view of World Trade Organization (WTO) on forced labor or using of Slaves by China in its huge factories and Internment or re-education camps?

If the World really want to become a happy place to live in, all the big countries need to help developing countries including countries in African Continent to forfeit all Chinese loans by all countries and seizure or nationalization of all Chinese assets, cancellation/rescinding of all Chinese contracts because of Chinese Virus Pandemic and Sue China for Compensation by all the countries in the world. Only then any measures against China will have any meaningful impact.