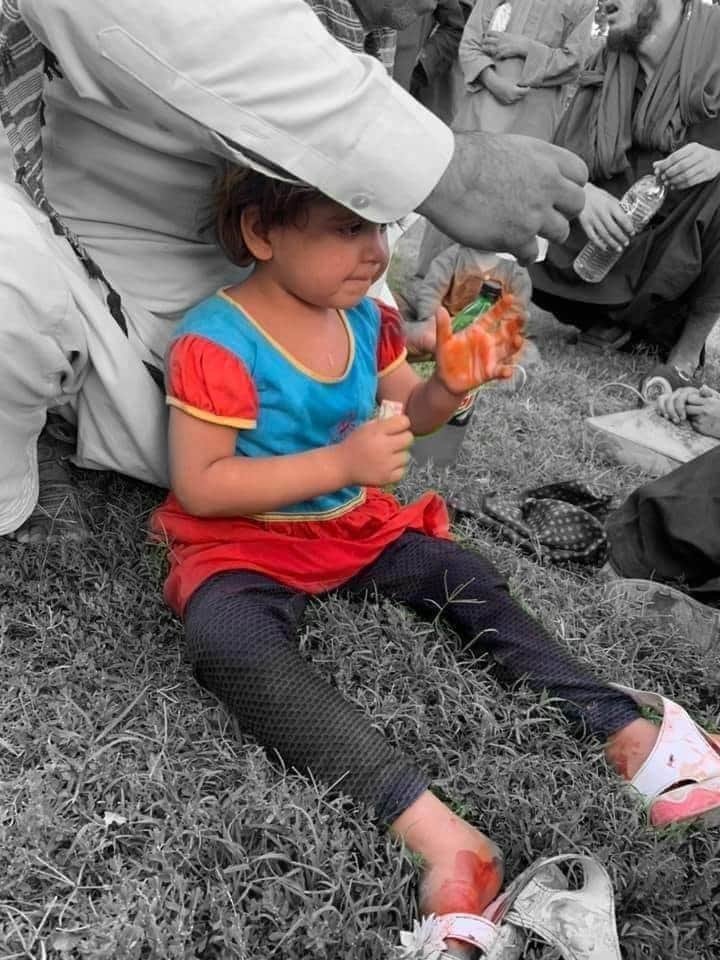 Pakistan Army’s Eid Gift for Pashtuns this year will be unforgettable by Pashtuns and for their generations to come. Pakistani Army and Frontier Corps (FC) opened straight fire on Thursday during a rally by minority Pashtun laborers demanding the reopening of a border crossing with Afghanistan, killing at least three people and wounding 16, human rights activists said.

The police denied that and said the protesters attacked a checkpoint at the Chaman border crossing.

Killing innocent people and pressurizing rest of the region with fear and horror is the tactic that Pakistan spy agency ISI and Pakistan Army use against the oppressed people. Moreover, then name those oppressed people as criminal is worse violation and abuse of Human Rights in Pakistan.

In our previous article Is Martial Law imposed by Fascist Pakistan in Khyber Pakhtunkhwa? we covered in details about the previous Khar Qamar Massacre by Pakistan Army. Kharqamar or Kharkamar or Khar Qamar massacre took place on May 26, 2019 during a peaceful non-violent, gandhinian protest march when Pakistan Army soldiers opened fire on the peaceful protesters and activists of the Pashtun Tahafuz Movement (PTM), who were protesting the targeted killings and enforced disappearances by Pakistan Army. In the firing on the unarmed civilians gathering near Khar Qamar check post in the Datta Khel Subdivision of North Waziristan, Pakistan, military forces shot into the PTM protest gathering. More than 14 PTM supporters were killed and over 50 were injured.

In the Chaman Massacre, yesterday, similar tactic was used by Pakistan Army.

The demonstrators — mainly workers from the Pashtun minority trying to get to Afghanistan for work — had rallied near the crossing, demanding authorities lift the months-long closure of the border related to measures meant to curb the spread of the coronavirus.

Witnesses say gunshots were heard when protesters tried to cross the border. As per sources, Pakistan Army officers as usual, torched a makeshift facility set up there to quarantine COVID-19 patients and blamed it on protesters.

After the initial border closure in March, the crossing reopened during daylight hours but remained closed for wage laborers who travel to Afghanistan by day and return home by the evening.

Footage taken by Pashtun activists and released on social media shows smoke at the border crossing and people in hospital beds in the town of Chaman.

According to police, the protesters, backed by the Pashtun Protection Movement, known for its criticism of the Pakistani army, stormed a border checkpoint. Farhatullah Babar, a prominent Pakistani activist, demanded an investigation.

City of Chaman has a large population of Pashtun ethnic group, who live on both sides of border in Balochistan & Afghanistan.

As per the censored version of Pakistan media (media in Pakistan is under the control of DG ISPR under the new PEMRA law) that is known to spread disinformation and do the cleanup afterwords, a local police official, said after protesters set fire to the quarantine facility, troops wielding batons pushed back protesters. Gunshots were heard amid the chaos.

As per locals this version of Pakistan is absolutely wrong and malicious propaganda to give license to Pakistan Army and paramilitary organization Frontier Corps (FC) to continue to disappear and kill Pashtuns for suppressing their Human Rights. Locals question Pakistan on not enforcing social distancing in any of the Pakistan’s cities while they are killing ethnic minorities in the name of preventing Chinese Corona Virus spread.

The puppet provincial home minister, Mir Ziaullah Longove also tried to spread the lies, told a news conference after the incident that the police did not open fire at the protesters, and insisted instead that there had been armed men among the rally who opened fire toward the troops.

Internet services have been suspended so that people cannot upload images or videos about the Chaman Massacre by Frontier Corps or Pakistan Army.

Does Pakistan Believe in Corona Virus?

Maulana Tariq Jameel, a leading religious scholar in Pakistan and public face of the missionary Tablighi group, told a gathering that COVID-19 is the result of the “wrongdoing of women.”

“When a Muslim’s daughter practices immodesty and the youth indulges in immorality, then Allah’s torment is unto such a nation,” the highly acclaimed cleric said in a televised address while sitting side-by-side with the prime minister. Jameel later retracted his remarks, but the damage was done.

Even among those who accept the existence of coronavirus, some are under the impression that the virus can not touch Muslims. There is a narrative that the disease is God’s wrath against the “infidels” for their “immorality.” This section of the society, again under influence from religious propaganda, believes that Muslims are immune to COVID-19 because they wash their hands and faces five times a day while performing ablution before each prayer.

Yet another section of the society — mostly those coming from rural backgrounds and the lower middle class — presumes that reporting their symptoms to a hospital or a health worker means certain death. They believe that the government is trying to show more fatalities in order to collect money from international aid agencies and donor countries.

Prime Minister Khan’s speeches downplaying the nature of the menace, and his government’s flipflopping announcements – a lock-down, a smart lock-down and finally no lock-down, all without flattening the COVID-19 curve — further deepened the disbelief among the people.

Now killing innocent people in the name of Coronavirus has created much anger in the Pashtuns against Pakistan.

As we mentioned in our previous article Is Martial Law imposed by Fascist Pakistan in Khyber Pakhtunkhwa? Pakistan puppet Provincial Governor of Khyber Pakhtunkhwa, in a clandestine manner promulgated (officially put a law into effect) an ordinance known as The KP Actions (in aid of civil power) Ordinance, 2019. Even when the provincial assembly was in session, the ordinance was issued very secretly and silently by the Provincial Governor on August 5, 2019.

The ordinance assigns wide-ranging powers to the authorized officers and armed forces besides giving an interning authority to detain a suspect until the continuation of action by the armed forces.

The armed forces have also been empowered to occupy any property. This ordinance was quietly passed on August 5, curtailing jurisdiction of the Peshawar High Court (PHC) in the province.

It undermines the existing legislation and the Constitution and threatens key liberties and rights by granting extensive powers to the armed forces in Khyber Pakhtunkhwa.

None of the Politicians from Imran Khan’s PTI or coalition parties have not visited Chaman to meet the familes of Pashtun ethnic people who were killed or injured in straight firing by Pakistan Army and Frontier Corps (FC).

As per sources, Khyber Pakhtunkhwa is sitting on a time bomb that can explode anytime. As per him the outburst will erupt anytime in the form of hate and anger and prevail all over the Pashtun Belt. Presently Pashtuns under Manzoor Pashteen, who is regarded as the Modern Day Gandhi are carrying on peaceful, non-violent Gandhinian protests and demanding the rule of Law and supremacy of the Constitution of Pakistan and implementation of the Fundamental Rights guaranteed under the Constitution and also clearing of the Khyber Pakhtunkhwa of the land mines and stop targeted killings of Pashtuns.

There is also anger against the Media for not covering the Chaman Massacre. One of the twitter users Inamullah Khattak tweeted, A lion in Islamabad zoo got full media coverage but massacre in Chaman went off air followed by internet shutdown in parts of Balochistan. A killer inside a courtroom got media coverage too. The state must know it has alienated federating units. A killer colonel should be hanged.”

Print and electronic media ignoring such atrocities will only fuel the fire further.

However regular genocide and massacre of Pashtuns in Khyber Pakthunkhwa belt is liable to cause a spark in the powder of pride of Pashtun people and may lead to a bigger problem for Pakistan than they are facing in Balochistan. If any PTM leaders are impacted, there won’t be anyone to control the large anger that is brewing. There are many voices that are talking about invalidity of the Durand Line and merger of Pashtun region with Afghanistan. There are also voices that call for an independent Pashtunistan.

Has Pakistan totally become mentally insane? Already there is a war for Freedom going on in Balochistan and Sindhudesh. Does the incompetent Imran Khan Government want to ignite another war for Freedom in Pashtunistan? Our Indian colleagues use a phrase, “Vinash Kale Vipreeta Budhi” (Means – that when one’s doom approaches, then one’s mind, one’s intelligence works perversely) seems to be apt in case of Pakistan.