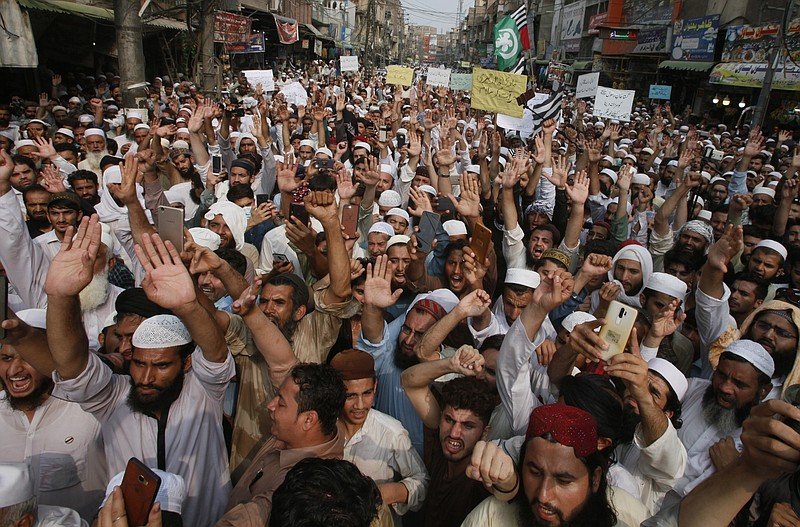 Tahir Naseem was reportedly shot several times in front of a judge during a hearing in a district court in Peshawar.

Naseem was a member of the Ahmadiya sect — a minority community that is considered non-Muslim in Pakistan. The Pakistani government outlawed the community in a series of constitutional amendments and ordinances passed between 1974 and 1984.

However, according to a spokesperson of the community, Naseem had left the Ahmadiyya sect many years ago

The attacker named Khalid, who was heard shouting angrily that Naseem was an “enemy of Islam”, was arrested at the scene.

US State Department Condemned the Murder

The US State Department’s Bureau of South and Central Asian Affairs condemned the incident Thursday and demanded “immediate action” by the Pakistan government.

In a press statement, on killing of Tahir Naseem, U.S. Department of State said, “We are shocked, saddened, and outraged that American citizen Tahir Naseem was killed yesterday inside a Pakistani courtroom. Mr. Naseem had been lured to Pakistan from his home in Illinois by individuals who then used Pakistan’s blasphemy laws to entrap him. The U.S. Government has been providing consular assistance to Mr. Naseem and his family since his detention in 2018 and has called the attention of senior Pakistani officials to his case to prevent the type of shameful tragedy that eventually occurred. We grieve with the family of Mr. Naseem. We urge Pakistan to immediately reform its often abused blasphemy laws and its court system, which allow such abuses to occur, and to ensure that the suspect is prosecuted to the full extent of the law.”

Ambassador Sam Brownback @IRF_Ambassador Ambassador at Large for International Religious Freedom at USCIRF also tweeted, “Disturbed by reports that Tahir Naseem, a US Citizen, was murdered while standing trial for #blasphemy. We call on @PakPMO and the Government of Pakistan to ensure the perpetrator is held accountable and investigate this egregious courtroom security lapse.

Here is the text of the USCIRF Press statement:-

The United States Commission on International Religious Freedom (USCIRF) today mourns the death of Tahir Ahmad Naseem, a U.S. citizen who was shot in a courtroom in Peshawar, Pakistan on July 29, 2020. The assailant claimed to have shot Naseem because he had belonged to the Ahmadiyya faith.

“Pakistan’s blasphemy laws are indefensible to begin with but it is outrageous beyond belief that the Pakistani government was incapable of keeping an individual from being murdered within a court of law for his faith, and a U.S. citizen, nonetheless,” USCIRF Commissioner Johnnie Moore stated. “Pakistan must protect religious minorities, including individuals accused of blasphemy, in order to prevent such unimaginable tragedies. The authorities must take immediate action to bring Mr. Nassem’s killer to justice.”

Tahir Ahmad Naseem was arrested two years ago and charged with blasphemy under the Pakistan Penal Code. Blasphemy cases in Pakistan are extremely controversial and have led to riots and vigilante justice. As highlighted in a USCIRF policy update about Pakistan’s blasphemy law, USCIRF is aware of nearly 80 individuals imprisoned on blasphemy charges, half of whom face life imprisonment or the death penalty.

“As USCIRF has noted countless times, Pakistan’s blasphemy law inflames interreligious tensions and too often leads to violence,” noted USCIRF Vice Chair Anurima Bhargava. “We urge the State Department to enter into a binding agreement with the Pakistani government that includes the repeal of blasphemy provisions in the Pakistan Penal Code.”

In its 2020 Annual Report, USCIRF recommended the State Department redesignate Pakistan as a “Country of Particular Concern,” or CPC, in part because of the “systematic enforcement of blasphemy and anti-Ahmadiyya laws,” which often target religious minority communities. In a recent policy update, USCIRF provided an overview of key issues that should be included in any binding agreement between the governments of the United States and Pakistan.

According to data provided by the National Commission for Justice and Peace (NCJP), a total of 776 Muslims, 505 Ahmadis, 229 Christians and 30 Hindus have been accused under various clauses of the blasphemy law from 1987 until 2018.

The blasphemy law calls for the death penalty for anyone found guilty of insulting Islam. But in Pakistan, the mere allegation of blasphemy can cause mobs to riot and vigilantes to kill those accused.

We covered in detail about Pakistan’s Blasphemy laws in our previous article Christian and Hindus Face Blasphemy Laws, Acid Attacks, Forcefully Converted to Islam in Pakistan

Christians and Hindus are the biggest victims of the misuse of Pakistan’s draconian Blasphemy laws. These laws are used to falsely implicate any minority in false case just to settle their personal scores or incite religious hatred. Hindu and Christian girls are increasingly kidnapped, forcefully converted to Islam and married to Islamist Radicals. Cases of Acid attacks on Christian and Hindu girls have increased. We covered attacks on Christians in Details in our previous article “Pakistan A Living Hell For Christians. But Takes Foreign Aid From Christian Countries.”

In deeply conservative Pakistan, any attempt to even amend the blasphemy law to make it more difficult to bring charges or abuse it has brought mobs out on the street.

At the rally in Peshawar, the demonstrators carried signs praising Khan for the killing, calling for his immediate release from jail and saying he killed Naseem because the government was too slow in prosecuting blasphemy cases.

“We are not in favor of taking the law into our own hands, but Faisal did what the government should have done two years ago,” said Mufti Shahabuddin Popalzai, who led the rally through the narrow streets of the old city.

Although Pakistani authorities have yet to carry out a death sentence for blasphemy, there are scores of accused on death row. Most are Muslims and many belong to the Ahmadyya sect of Islam, reviled by mainstream Muslims as heretics.

What if all the Christians from Pakistan are migrated and settled in Europe, Pakistan will have no connection left with Christianity.

Whole Christian world can than boycott Pakistan and stop all the Foreign Aid to the FATF Grey Listed Pakistan. Christians will assimilate well with Europeans being from the same religion. If European Union, UK want, they can instead migrate 2.5 million Islamist refugees to Pakistan in an exchange of Refugee program. Wouldn’t Islamist Refugees would gel well in Pakistan which itself is a Radical Islamist Nation?