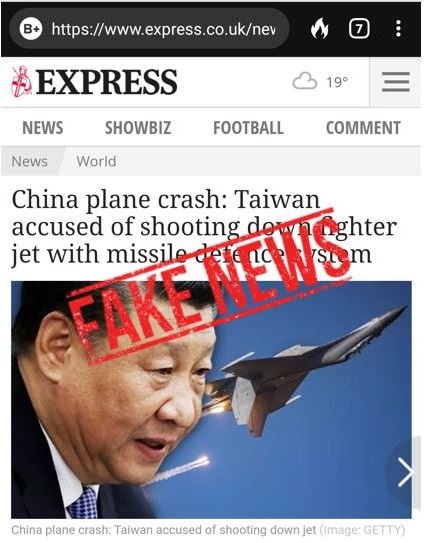 Several News Channels and Media houses circulated the news that Taiwan has reportedly shot-down a Chinese Air Force, Russian-origin Su-35 aircraft that supposedly violated its airspace. Multiple videos circulating on social media show a jet, believed to be a Chinese People’s Liberation Army Air Force (PLAAF) Su-35, immersed in smoke, some video showed the plane still burning, one of the video even showed the injured pilot being rescued from the Fighter Jet. No Fact Check was done.

In fact the Chinese Wu Mao (50 Cent) troll army first posted such tweets and that were picked by International News Websites like https://www.express.co.uk

Later on the news went viral and was shared by many big handles on different social media platforms.

We checked with Ministry of National Defence R.O.C that released an official statement.

As per the Official Statement, “In response to the Internet spread of “Taiwan shot down a CCP SU-35 aircraft?” The Air Force Command solemnly refuted this (4) day that this is false information, and completely untrue.

The Air Force Command pointed out that it strongly condemns such malicious acts by deliberately creating and disseminating false and false information on the internet in an attempt to consfuse the audience.

The Air Force command emphasized that in order to maintain airspace security, the headquarters will continue to closely monitor the conditions of the sea and airspace around the Taiwan Strait, and provide correct information in a timely manner to prevent the spread of fake and false news, and to avoid social unrest, and appeals to people to rest assured.

In respect of the above official statement from Ministry of National Defence R.O.C. the news of Taiwan shooting down Chinese SU-35 Jet are fake.

First, everyone believed Taiwan shot down based on the continued aggression China showed towards Taiwan. But, when air cleared, it’s revealed that its a crash which happened inside China. Who spread the rumor is something not clearly known.

The Situation for Taiwan is already very fragile and big Social media handles should act responsibly and do fact check before making any news viral.

Chinese Wu Mao (50 Cent Chinese Troll Army) is very much active on all social media platforms including Twitter. They are responsible for initiating all the Fake News. Why does China want such Fake News to be spread world wide? Is China looking for an opportunity to attack based on the fake news and then justify its attack?