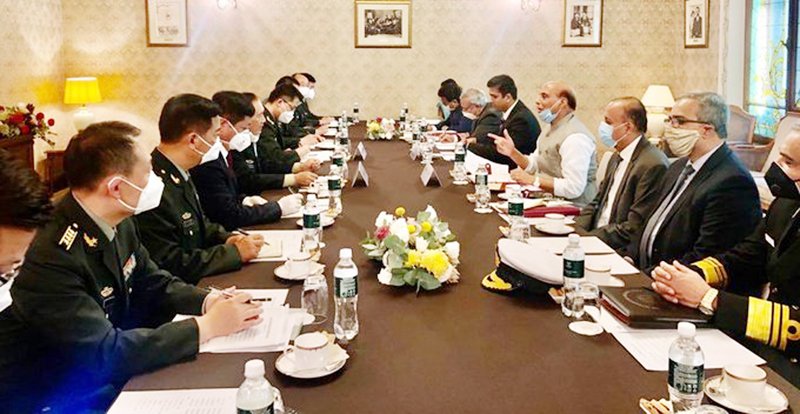 International Community was eagerly waiting with an expected result of the India-China Defence Ministers Meet over the hottest flash point between two Nuclear Nations – Chinese illegal Occupation of Indian Territory of Aksai Chin since 1960’s war and regular salami slicing and inching ahead and blaming India for standing up to Chinese bullying. Message is very clear. China is not interested in Peace and Chinese threats of “Consequences” continue.

In an ironic twist of events, yesterday’s happenings in Moscow clearly showed who is getting cornered. After India said it won’t be a part of the military games which China is a part of, and in parallel, conducted military drills with Russia in the Indian Ocean, the writing was clear on the wall.

Chinese strategy is simple. You advance inch by inch and then recede a few inches by demanding both sides withdraw at the same time – in effect, the side didn’t advance those inches will lose the land. Else, what can explain the fact that China is deep inside Indian claim lines but still wants India to recede even further back?

The domestic situation in China coupled with an anti-Chinese sentiment, especially in the post-COVID world means China needs a diversion – a really massive diversion which can reestablish it’s position in the post-Cold War world order. The natural choice is India – inflict a defeat on India and make the weaker countries in the neighbourhood toe the Chinese line. But, things always don’t work in the Chinese way.

The main reason for that, actually, lies in the concept of Communism itself. Whatever Communism is, it has got two fundamental flaws – no dissent, censorship. Had China not censored it’s performance against India in 1967 or 1987, the situation would have been far better. But, Chinese are made to read only about the 1959 Conquest of Tibet and the crushing blow China inflicted on India in 1962. When China refuses to learn from the mistakes of the past and models it’s plans based on the hand-picked incidents which favoured it, how will it be in a position to estimate the actual outcome of the events?

While India didn’t follow up on the successes in the Galwan Valley incident, it is surprised to notice that China learnt nothing from the incident – there is a line which they can never cross. Talks went on for months, everyone made their plans, fully knowing the talks will lead nowhere, but when China tried to threaten Chusul one of the nerve centres of India’s position in that area, India decided to act. It’s immaterial to us what happened and how it happened. All that matters is the fact that India reacted to the Chinese actions and captured a few dominating hill-top positions, some of them for the first time after 1962. This has compromised the Chinese position seriously – giving India visual intelligence over vaste swathes of Chinese theatre of operation.

Predictably, China went into a panic mode, issuing four statements in the first 24 hours after the clash

and during Indian Defence Minister’s visit to SCO, requested for a bilateral meet.

One may want to argue that the talks between Indian and Chinese Armies in Ladakh are serious enough to warrant a breakthrough.

But, is it that simple? What transpired in Moscow, may be, will help us understand how the talks will go? A meeting was requested by the Chinese at the last moment in Moscow, which India accepted. Ignoring all the rhetoric before this meeting,

it makes much sense for us to understand what happened through this meeting. And predictably, besides the formal communication by Indian Government and a note by the Chinese mouthpieces, we have nothing much.

Raksha Mantri Shri Rajnath Singh met General Wei Fenghe, State Councillor and Defence Minister of China on 4th September in Moscow on the sidelines of the Shanghai Cooperation Organisation (SCO) meeting. The two Ministers had frank and in-depth discussions about the developments in the India-China border areas as well as on India-China relations.

Raksha Mantri categorically conveyed India’s position on the developments along the Line of Actual Control (LAC) including in the Galwan valley in the Western Sector of the India-China Border Areasin the last few months. He emphasised that the actions of the Chinese troops, including amassing of large number of troops, their aggressive behaviour and attempts to unilaterally alter the status quo were in violation of the bilateral agreements and not in keeping with the understandings reached between the Special Representatives of two sides. Hon’ble RM stated clearly that while the Indian troops had always taken a very responsible approach towards border management, but at the same time there should also be no doubt about our determination to protect India’s sovereignty and territorial integrity.

State Councillor and Defence Minister of China said that both sides should scrupulously implement the consensus reached between Prime Minister Modi and President Xi Jinping and continue to solve the issues through dialogue and consultation, strictly follow the various bilateral agreements, strengthen the regulation of frontline troops and not undertake any provocative actions that might escalate the situation. The two sides should focus on the overall situation of India-China relations and work together to de-escalate the situation as soon as possible, and maintain peace and tranquillity in the India-China border areas. The Chinese Defence Minister suggested that both sides should maintain communication at all levels including between the two Ministers.

Raksha Mantri said that both sides should take guidance from the consensus of the leaders that maintenance of peace and tranquillity in the India-China border areas was essential for the further development of our bilateral relations and that two sides should not allow differences to become disputes. Accordingly, the two sides should resolve the ongoing situation and outstanding issues in the border areas peacefully through dialogue. The Chinese Defence Minister conveyed that Chinese side too desired to resolve the issues peacefully. Raksha Mantri advised that it was important therefore that Chinese side should work with the Indian side for complete disengagement at the earliest from all friction areas including Pangong Lake as well as de-escalation in border areas in accordance with the bilateral agreements and protocols on maintenance of peace and tranquillity in border areas, strictly respect and observe the line of actual control and should not make attempts to unilaterally change status quo. He further said that the current situation should be handled responsibly and that neither side should take any further action that could either complicate the situation or escalate matters in the border areas. Raksha Mantri conveyed that the two sides should continue their discussions, including through diplomatic and military channels, to ensure complete disengagement and de-escalation and full restoration of peace and tranquillity along the LAC at the earliest.

India has an airbase in Taikistan. Meeting Tajik delegation immediately after a meeting with China raises many a question.

China has habit of giving similar threats to all the countries. China has lived enough in its fantasy world. Didn’t the single child Chinese kids face enough defeat at the hands of Indian Paramilitary forces? If Indian Police forces can give a bloody nose to the Chinese, just imagine what can Indian Army do to the Chinese?

China is still counting its strength in numerical extras China has. But China forgets that Indian Army and Indian Political Leadership is not the same as that of 1962 where in China illegally occupied Indian Territory of Aksai Chin that was part of Indian Union Territory of Ladakh. If the war has to decide who keeps the territory, then Indians have an history of wars and Indians are known as warriors.

Question Arises – China keeps on giving such threats to all its neighbors. Chinese Threats are not only limited to Its borders, but Chinese threats of “Consequences” transcend borders and extend to United States, Australia, European Countries. Would there be a joint Task Force made by all the countries to punish China for Bio-Terrorism that took the lives of 875,000 civilians worldwide? China that brought the world economy to a standstill and billions of people lost their income, jobs, companies going bankrupt beause of Chinese Bio-Terrorism by spreading Chinese Corona virus, should the Bio-Terrorist Nation let go scot-free to release more bio-weapons in its stock against its enemies?