Blasphemy Laws In Pakistan – A License To Kill: By Zafar Sahito 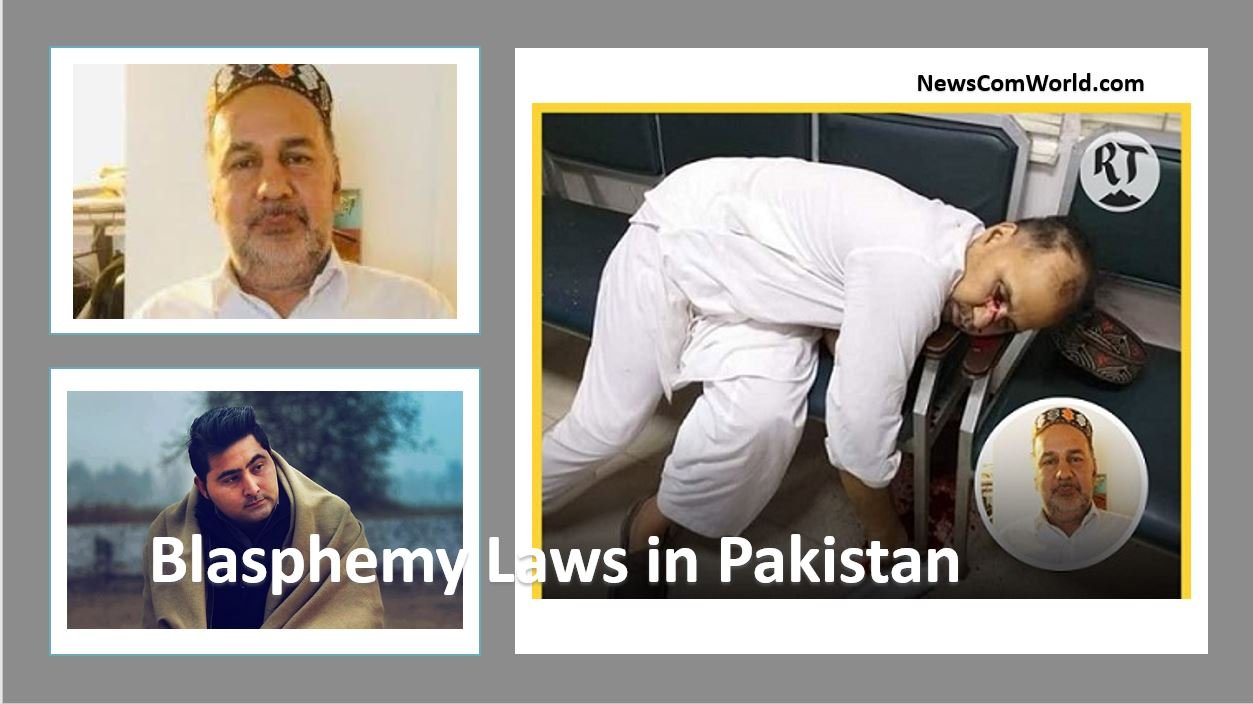 Blasphemy Laws in Pakistan unlike in any other Muslim country are being misused grossly and have become a License To Kill the minorities.

“Whoever by words , either spoken or write or by visible representation or by any imputation, innuendo or insinuation, directly or indirectly, defiles the sacred name of the Holy prophet Muhammad (PBUH) shall be punished with death or imprisonment for life and shall also be liable to Fine” .

The law prescribes a fixed death penalty for all those who are found guilty. The option of life imprisonment was made defunct after a 1991 federal Shariat Court Judgment. But Pakistan where religious narrative is dominant, religious figures and maniacs control the country and they have full support of state machinery and military establishment. In their view “blasphemy” is an unpardonable offense. Every one have licenses to kill anyone in name of blasphemy publicly. No need of waiting for court trials and judgment. Hence a Assailant can Easily become a “Ghazi” , “Hero” or “Martyr” of nation.

Blasphemy law was introduced first time during British Rule in 1860. The punishment of blasphemy: “10 years imprisonment or fine will be imposed if some one found guilty of blasphemy”

Later on in 1927 with few amendments more clauses were added in blasphemy law. In 1953 when Anti-Ahmadiyya riots erupted Jamaat-e-Islam demanded amendments in Blasphemy law. But Government of Pakistan didn’t entertain them. However, in 1974 again Anti-Ahmadiyya riots erupted and second amendment was passed in constitution of Pakistan because that time a movement was launched by all Islamist parties by name of “Tahreek-e-khatme Nabuwwat”. Later on in 1984, under Dictator Zia-Ul-Haq regime, an Anti-Ahmadiyya ordinances were made in constitution of Pakistan which restricted the freedom of religion for Ahmadi’s . According to this law “Ahmadi’s cannot call themselves Muslim or ‘pose as Muslim’ which is punishable by three years in prison”.

Blasphemy laws in Pakistan are derived from Holy Book of Muslims “Quran” and Hadith’s books. However, lot of Muslim Schools of thought and Scholars do not agree on content. They think that these quotes or even verses and are misinterpreted by the dominant Muslim Sect in Pakistan with support of establishment. They are using blasphemy law as tool to achieve their own interests and agendas, like this one verse from “Quran” which directly mentions blasphemy (sabb) is 6:108. The verse calls on Muslims to not blaspheme against deities of other religions, lest people of that religion retaliate by blaspheming against Allah.

“And do not insult (wa la tasubbu) those they invoke other than Allah, lest they insult (fa-yasubbu) Allah in enmity without knowledge. Thus We have made pleasing to every community their deeds. Then to their Lord is their return, and He will inform them about what they used to do.” — Qur’an, [Quran 6:108]

Another verse from Quran:-

“The only punishment of those who wage war against Allah and His Messenger and strive to make mischief in the land is that they should be murdered, or crucified, or their hands and their feet should be cut off on opposite sides, or they should be imprisoned. This shall he a disgrace for them in this world, and in the Hereafter they shall have a grievous chastisement. Except those who repent before you overpower them; so know that Allah is Forgiving, Merciful.” — Qur’an, [Quran 5:33–34]

There are few Hadith’s also referred as justification of blaspheme must be executed. But not everyone agree on these quotes. Secular Muslim people in Pakistan have different thought about blasphemy laws. They have always demanded for end of blasphemy laws but never succeed because strong hands are behind this ideology. Religious sentiment is a powerful tool in Pakistan and had been always used by masters of Pakistan to control people, creating pressure groups of religious parties and than staying in power as long as needed. As Minorities and specially few Wealthy Hindus are an easy prey in Pakistan so Extortion from Minorities in Pakistan is a common crime rarely reported because of fear. Victims pay huge amounts (Protection Money) and favors to Mosques and Madrassas if they have to save their life, otherwise, they have to leave business and their properties.

“Due to Coronavirus Our temple is closed so I am performing my early morning prayers (Bhajan) at home only. One day my neighbor knocked at my door and threatened our family. “You Hindus go to your “Cow Mata” country India and sing your Bhajans there. If you want to live in Pakistan, live quietly. Don’t Chant ”Kirshna” nonsense every early morning”.

One of my Hindu friend sent me this message about two months ago. “Believe me I was not Chanting Loud Lord Kirshna Bhajan. But my neighbor always look for any opportunity or reason to suppress us, so we sell our apartment to them and leave this place. While they always listen to Indian music loudly all the time, even there is a Mosque & Madrasa in our apartments where loudspeakers are used continuously!”

Aasya Noreen famous as ( Asia Bibi ), A Pakistani Christian was accused of blasphemy in 2009.

“Why you used my Cup for drinking water? You are Non-Muslim! A ‘kafir'” argument of Noreen’s co-workers led Noreen fate to blasphemy and she was arrested in 2010. She was convicted of blasphemy by a Pakistani court and sentenced to death by hanging but in 2018 Supreme Court of Pakistan in a appeal acquitted her based on insufficient evidence (Actually International Pressures), but she was not released from custody because of safety concerns. A Muslim Cleric Maulana Yousaf Qureshi announced a bounty of 500,000 Pakistani Rupees to any one who would kill Asia Bibi.

A notable point during this case, Minorities Minister Shahbaz Bhatti and Punjab Governor Salman Taseer both were assassinated for advocating on behalf of Asia Bibi and opposing the blasphemy laws. In 2019 Finally she arrived in Canada but still She is receiving life threats.

Mishal Khan a student of Mass communication of Abdul Wali Khan university Mardan Pakistan, who was killed in 2017 in premises of University by an angry mob over allegations of posting blasphemous content online. While later in investigation nothing was proved against him. Only secular views, quotes and books on democracy and equality of humanity. But we lost a beautiful Soul already!

He was in the hostel of university when He was stripped naked and severely beaten by group of students and than shot. He succumbed to his injuries. He was laying on the floor, the angry mob was kicking his lifeless body and beating it with wooden planks. Then his body was thrown from the second floor of the building. Even they tried to burn his body while Chanting “Allah-o- Akbar”.

At least 25 law enforcement officers were present there, but no action was taken by them to save the precious life of Mishal Khan.

Recently by July 29, 2020 an American, Tahir Naseem, was shot and killed inside a Pakistani courtroom, while on trial for alleged blasphemy. He was Ahamadi but one of my source told me that he was not any more Ahamadi. He was just was having mental issues. The murderer statement:-

“A light appeared in my dream last night and ordered me to kill this enemy of Allah, so you will be awarded with gift of heaven”.

Murderer was praised by majority of people in Pakistan and even government officials. Politicians used his picture as their display picture (DP) on their social media ID’s.

Do you think that the murder of any human being is morally legitimate on the basis of his belief, even if he is a ‘atheist’ or an infidel? Why not forgiveness is chosen on vengeance?

Do you think that the murder of any human being is morally legitimate on the basis of his belief, even if he is a ‘atheist’ or an infidel? Why not forgiveness is chosen on vengeance?

When I reported this case and announced campaign on social media against Blasphemy law, Forced conversions and enforced disappearances in Pakistan and organized a protest at Consulate General of Pakistan Houston Texas, I received many life threats and was targeted by unknown profiles on Social media.

But actual number is more because lot of cases are never reported because of fear , as of my resources only within last 40 days 42 blasphemy cases are reported in Pakistan.

Would the International Human Rights Organizations advocate for putting sactions against Pakistan?

Would the European Union continue to give economic aid and trade benefits to Islamist Radicals in Pakistan that just innovate ways to kill non-Muslims including Christians, Hindus and Sikhs?