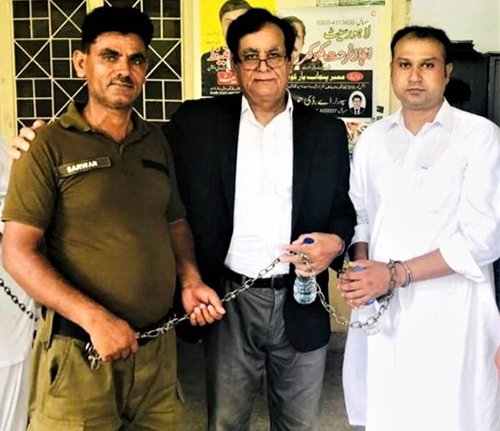 A Pakistani court has sentenced a Christian man to death after convicting him of sending text messages containing “blasphemous” content.

Asif Pervaiz, 37, was sentenced on September 8 after a trial in the eastern city of Lahore that had been running since 2013.

He had been accused by the supervisor of the factory he was worked at, for allegedly sending derogatory remarks about the Muslim Prophet Muhammad to him in text messages.

His lawyer said he would appeal the verdict with the Lahore High Court.

“He has already spent seven years [in custody]. Who knows how many more years he will have to wait till this is over?” Saiful Malook asked.

Pervaiz has denied the allegations, telling the court during his trial that his supervisor made the accusation only after he had refused to convert to Islam, Malook said.

The court order said Pervaiz would first serve a three-year prison term for “misusing” his phone to send the text messages in question before being “hanged by his neck till his death,” according to Reuters. The man was also fined 50,000 Pakistani rupees ($300).

Insulting Islam is punishable by death in Pakistan, and the mere rumor of blasphemy can lead to lynching by mobs.

Most of the charges were filed against Shi’as and related to speeches made at religious processions, it said.

This case is similar to an earlier case we covered in details in our previous article Christian and Hindus Face Blasphemy Laws, Acid Attacks, Forcefully Converted to Islam in Pakistan

On 4 April 2014, the District Court in Toba Tek Singh, Punjab, sentenced Shagufta Kausar and Shafqat Masih (a disabled) to the death under Section 295-C of the Pakistani Penal Code, commonly referred to as the “blasphemy law” “, which punishes the “Use of derogatory remarks, etc., in respect of the Holy Prophet”, i.e. Muhammad, with the death penalty. The couple also argues that evidence exists that their sentencing judge, Mian Amir Habib, “was intimidated by hardline lawyers and religious leaders in the community

Their accuser, a Gojra resident called Muhammad Hussain, says that on 18 July 2013 he received a text message with blasphemous remarks on his mobile phone whilst praying in the mosque.

Kausar alleged that the neighbour succeeded in obtaining the copy of her National Identity Card (NIC) and purchased a SIM in her name and later misused that SIM and forwarded the alleged blasphemous messages to the complainant, who was in collusion with their neighbor.

Both were awarded death sentence by a district court in Pakistan’s Punjab province in April 2014 and also imposed a fine of Rs 100,000 each. Appeal is pending in Lahore High Court. Till the writing of this article, Kausar is being held at Multan prison while her husband is imprisoned about 150 miles away at the Faisalabad District Jail. They have not seen each other since before their sentencing. Their four children, aged between nine and fifteen, are now in the care of a paternal aunt.

Nearly 80 people were known to be imprisoned in the country on blasphemy charges, half of whom face life in prison or the death penalty, the U.S. Commission on International Religious Freedom said in its 2020 annual report released in April.

It is very easy to blame anyone and plant some blasphemous messages/evidence and threaten the victims to either convert or agree to their illegal and unjust demands.

Earlier this month, the Human Rights Commission of Pakistan (HRCP) said police had filed blasphemy charges against at least 40 people over the last month.

Should all the European Countries, US, Canada, Australia and other countries stop giving all aid to Islamist Radical Pakistan?

Shouldn’t European and all other countries prefer giving citizenship to Christians, Hindus and Sikhs from Pakistan that are religiously persecuted by Islamist Radical Pakistan?