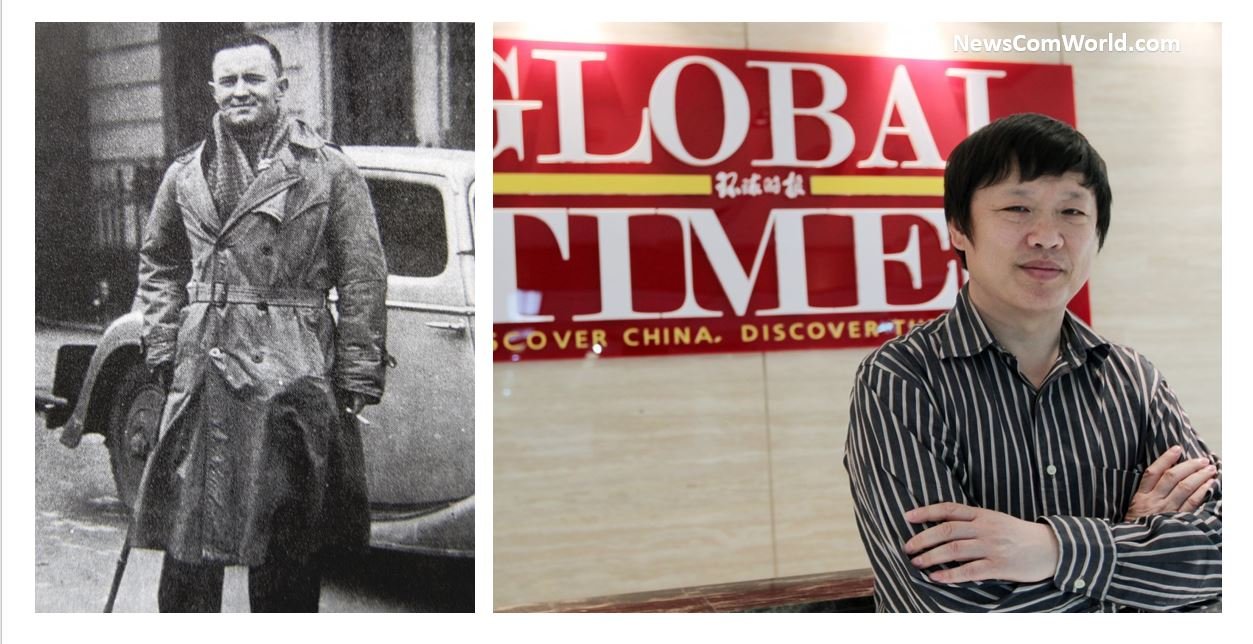 Hu Xijin Editor of Global Times News is Xi’ Haw Haw who lies to public that a defeat is a victory following same pattern of Nazi Germany during WWII.

Hu Xijin, the Editor of Communist Chinese CCP Mouthpiece Global Times News has become a Propaganda News Media of the Communists. People are comparing China with the Nazi Germany and are realizing how China is following Nazi Germany strategies in every way to invade the whole world.

Everyone knows China is threatening all its neighbors and using slami slicing to take control of their lands. Taiwan is constantly threatened with Chinese PLA invasion. There is possiblity of war between China and India because of Chinese illegally occupying Indian territories of Aksai Chin in Indian Union Terriotry of Ladakh and blaming India of adjustments of Indian positions on the Indian side. South China Sea is another battle field that is sitting on the powerful powder of pride that can explode with a small spark.

China is constantly threatening not only its neighbors but also all other countries that do not kneel to Chinese Emperor Xi Jinping.

Poeple would wonder who was Lord Haw Haw

Lord Haw-Haw was a nickname applied to William Joyce, who broadcast Nazi propaganda to the UK from Germany during the Second World War.

The English-language propaganda radio programme Germany Calling was broadcast to audiences in the United Kingdom on the medium wave station Reichssender Hamburg and by shortwave to the United States. The programme began on 18 September 1939 and continued until 30 April 1945, when the British Army overran Hamburg.

Through such broadcasts, the Reich Ministry of Public Enlightenment and Propaganda attempted to discourage and demoralise American, Australian, British, and Canadian troops, and the British population, to suppress the effectiveness of the Allied war effort through propaganda, and to motivate the Allies to agree to peace terms leaving the Nazi regime intact and in power. Among many techniques used, the Nazi broadcasts reported on the shooting down of Allied aircraft and the sinking of Allied ships, presenting discouraging reports of high losses and casualties among Allied forces. Although the broadcasts were well known to be Nazi propaganda, they frequently offered the only details available from behind enemy lines concerning the fate of friends and relatives who did not return from bombing raids over Germany. As a result, Allied troops and civilians frequently listened to Lord Haw-Haw’s broadcasts despite the sometimes infuriating content and frequent inaccuracies and exaggerations, in the hopes of learning clues about the fate of Allied troops and air crews.

An April 9th, 1940 “News in English” broadcast where Joyce reads a series of news bulletins from the German Supreme Command regarding the invasions of Norway and Denmark that had occured just that morning. Especial note should be given to the incredible promise of the German Minister to Norway that “Germany does not intend to infringe the territorial integrity or political independence of the Kingdom of Norway, either now or in the future”.

The conclusion of the above broadcast, where an explanation of what happened is given. Here the propaganda starts in thick, starting by harking to British occupation of territories in her history for the purposes of her protection and comparing those instances to Germany’s actions. Also are given communiques on individual unit movements; bombing raids on the British port Scapa Flow; Danish political developments; Swedish reactions.

An excerpt from the above: in a classic Nazi propaganda moment, Churchill is claimed to now understand that he is facing a force characterized as “the human embodiment of that cleansing atmospheric phenomenon — the thunderstorm”.

Now since you understand the Nazi way of telling lies to the public and running a propaganda during the World War, now read the tweets from Communist Chinese CCP mouthpiece the liar Global Times and its Editor Hu Xijin. You will find that China is using the same Lies to tell its public that a defeat is a victory.

Did you have enough laugh? Not Yet, well enjoy more of his Propaganda tweets

I laughed here when i read this. China Occupies Indian Aksai Chin that is 38,850 sq Km illegally after the Chinese Invasion in 1962 war and has been regularly intruding further into indian territories using its slami slicing tactics and blames India of making readjustments of Indian positions on Indian side of Line of actual control.

We called out Chinese lies in our previous article China Is A Big Liar : Chinese Soldiers Fire at Indian Soldiers And Still Cry Victims In Media

Now lets Check what Global Times News of Hu Xijin is doing. All their articles are filled with direct threats of “backfire” or “retribution” or “Consequences”

How long China can fool its citizens and run its global propaganda based on lies? Chinese Lies have surpassed the stage that even the common man knows that China is a Liar and no one trusts China. Who is responsible for bringing down China to such a shameful level that despite boasting for its strengths, everyone knows CCP PLA hires single child kids who cannot risk dying in war. If Chinese kids start dying in a war, it will create public anger against Xi’s CCP that can overthrow Fascist CCP.