US Fires Expose : Is Forest Fire Jihad the cause of destruction? 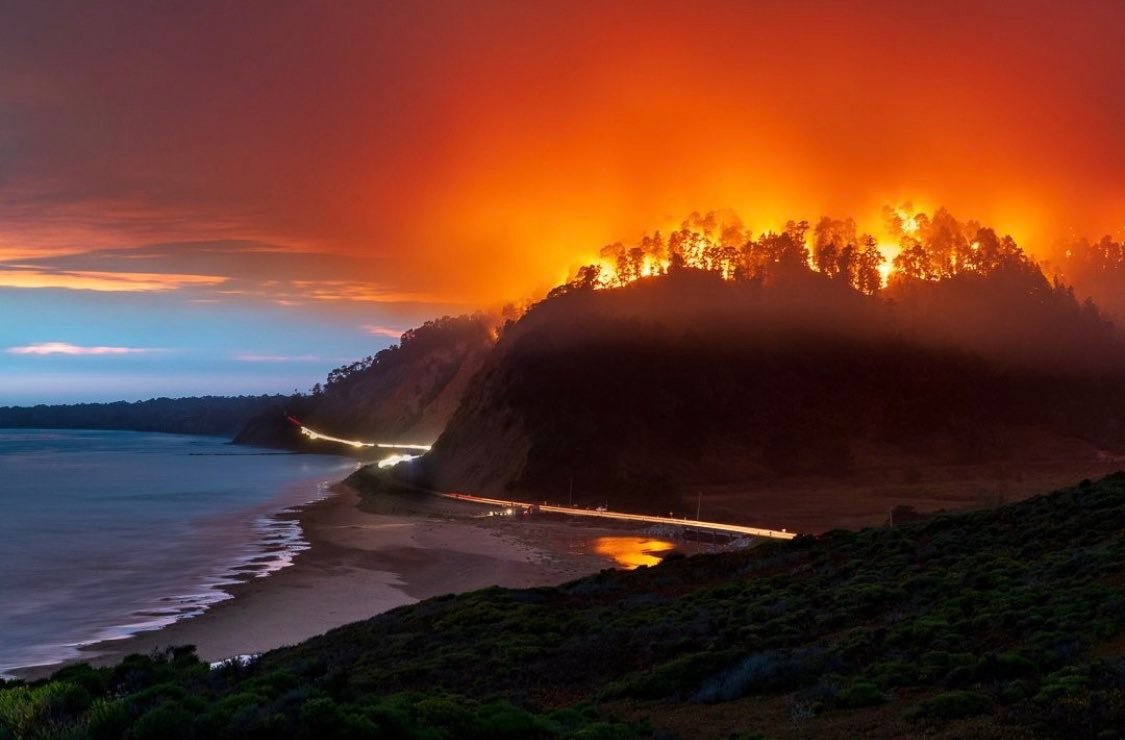 California has more than 24 major wildfires burning with thousands of firefighters and support personnel battling these out of control fires which have burned more than 2.4 Million Acres. These fires have claimed the lives of at least 12 with dozens still missing. Two hundred thirty-three soldiers from the 14th Brigade Engineer Battalion based out of Joint Base Lewis-McChord, Washington are deployed in support of the August Complex fire which is currently encompassing 746,422 acres and only 25% contained. More than 3.1 million acres have burned this year in California, more than any other fire in the state’s recorded history.

Governor Gavin Newsom declared a state of emergency in five counties on 3-September, 2020.

Over ten percent of Oregon’s total statewide population, roughly 500,000 people are under evacuation orders, according to a press conference by Gov. Kate Brown on Friday. Oregon’s emergency management director Andrew Phelps said state officials are “preparing for a mass fatality event” and that thousands of structured have been destroyed.

More than 36 active fires has burned more than 1,349 square miles. To put that into perspective, according to the Oregonian, the number of acres that have burned in the past three days alone have nearly doubled the total acres that typically burned in a “normal” year. There is nothing normal about 2020. At least seven deaths are attributed to these Wildfires, including a 13 year old boy and his grandmother who were caught in fires near Salem while trying to evacuate.

US Fires are similar to the ones witnessed in Australia. Forests in Australia started burning since September 2019. At least 24 people were killed – including three volunteer firefighters – and more than 6.3 million hectares (63,000 sq km or 15.6 million acres) of bush, forest and parks have been burned. What matters is over 500 million animals killed and there is a high chance that some species which were not even considered as vulnerable may go extinct due to loss of numbers and loss of habitat.

If you ask California’s governor Gavin Newsom, the recent wildfires in California, Oregon and Washington, the governor will tell you these fires are the direct result of global warming.

Entire Leftist/Liberal Main Stream Media is filled with only one narrative to pin the California Fires to the effects of Global Warming. Everyone knows the Main Stream Media follows the tactics of Diversion and Denial. While Leftist/Liberal Media is diverting the public attention by blaming the Nature as the cause of California Fires, what is that they are denying the public to know? Are there bigger actors at play that MSM does not want public to know?

In this article we bring to our readers the threat of Forest Fire Jihad given by ISIS last year. It is for the Federal and State Intelligence authorities to investigate how far this threat is real. Is Forest Fire Jihad the cause of destruction? Are ISIS inspired actors behind these forest fires?

A media outlet affiliated with ISIS has been instructing the group’s radical adherents to set forest fires in the United States and Europe to cause mass ecological disasters, according to posts on an internet forum dedicated to the terror group.

In an article published on 5-November 2019 freebeacon.com ISIS Tells Followers to Set Forest Fires in U.S., Europe and on 6-November 2019 in ISIS fanatics are urged to attack America and Europe with forest fires and spark ecological carnage in chilling propaganda

ISIS has urged its fanatics to ignite forest fires in the US and Europe to cause ecological chaos in the wake of historic summer blazes in California and Spain.

At least four posters from Quraysh, an Islamic State mouthpiece, have encouraged supporters to ‘ignite fires’ as part of its jihad.

‘Ignite fires in the forests of America, France, Britain, and Germany, for they are painful to them,’ the poster released on Monday 4-November 2019 says. It was the fourth in a series which has been tracked since April by the Middle East Media Research Institute.

The first threat appeared in April 2019, according to the research institute, which monitors radical groups.

“Oh monotheists [followers of ISIS], ignite fires in the forests and fields, and we are addressing especially those who live in Europe and America, for they are painful to them,” that first warning read, according to the report.

Despite the death of ISIS chief Abu Bakr al-Baghdadi in a US raid in Syria last month, the terror group still seeks to cause carnage abroad through its social media campaign.

Historic forest fires have raged through California, Spain and Portugal over the summer and ISIS frequently prey on the Western misery of the day in their barbaric propaganda.

Indeed, the inferno which engulfed the Notre Dame Cathedral in Paris in April was touted as a victory and a curse upon followers of the Christian deity.

Al-Baghdadi blew himself up, along with two of his children, during an October 26 assault by American special forces on a heavily fortified compound in Idlib, northwestern Syria.

The raid was a major blow to the group, which has lost territories it held in Syria and Iraq in a series of military defeats by the U.S-led coalition and Syrian and Iraqi allies.

Many ISIS members have escaped through smuggling routes to northwestern Syria in the final days of battle ahead of the group’s territorial defeat earlier this year, while others have melted into the desert in Syria or Iraq.

The reclusive leader al-Baghdadi was known to be close to one of his brothers, known by his nom de guerre Abu Hamza.

Al-Baghdadi’s aide, a Saudi, was killed hours after the raid, also in northwestern Syria, in a U.S. strike.

The group named a successor to Al-Baghdadi days later, but little is known about him or how the group’s structure has been affected by the successive blows.

ISIS had already set up an external operations section dedicated to organising terrorist attacks outside Syria and Iraq before it declared the establishment of its caliphate in mid-2014. The section was part of the external wing of ISIS’s security department. It was established as a means of exerting control over foreigners within ISIS who were agitating to carry out external attacks. The security department’s internal wing was already holding Western hostages.

In September 2014, the head of ISIS’s security department released a statement that was akin to a standing operational order and which has become one of its most enduring and important releases. Although framed as a response to growing international efforts against ISIS, the statement was driven by internal imperatives to co-opt the jihadist milieu and project an image of power and capability. The statement gave ISIS supporters around the world, particularly in the West, carte blanche sanction to carry out attacks in its name. Supporters were told they should attack wherever and whenever they could, without seeking further permission or instruction. US was at the hit list.

Almost immediately, ISIS supporters in a number of Western countries began to follow this guidance, carrying out what came to be termed ‘ISIS inspired’ or ‘lone-actor’ attacks. Their attacks served to amplify ISIS’s terrorist reach beyond what its external operations section could direct. The widening of the threat ISIS posed was reflected by 80 countries joining the Global Coalition Against Daesh following its establishment in September 2014. The US leads the military component of the coalition under the auspices of Operation Inherent Resolve (OIR).

It took close to five years of fighting and over ‘34,000 air and artillery strikes’, which destroyed cities and displaced millions of people, to expel ISIS from the territory it held in Iraq and Syria. Yet, in early 2019, when it was already clear ISIS would lose its last enclave in Baghuz, Syria, the US Intelligence Community warned that it continued to pose a threat, noting ISIS still had eight provinces, ‘more than a dozen networks, and thousands of dispersed supporters around the world’.

Global jihadists in dozens of groups and countries threaten local and regional US interests, despite having experienced some significant setbacks in recent years, and some of these groups will remain intent on striking the US homeland. Prominent jihadist ideologues and media platforms continue to call for and justify efforts to attack the US homeland.

The conflicts in Iraq and Syria have generated a large pool of battle-hardened fighters with the skills to conduct attacks and bolster terrorist groups’ capabilities.

Al-Qa‘ida media continues to call for attacks against the United States, including in statements from regional al-Qa‘ida leaders, reflecting the network’s enduring efforts to pursue or inspire attacks in the West.

Despite territorial losses in Iraq and Syria, ISIS’s past actions and propaganda probably will inspire future Homegrown violent extremists (HVEs) attacks, similar to the enduring influence of deceased al-Qa‘ida ideologues, especially if ISIS can retain its prominence among global jihadist movements and continue to promote its violent message via social and mainstream media.

We covered it in details in our previous article Did Forest Fire Jihad Caused The Largest Forest Fire In Australia?

Democrats have been attending the functions organized by the Islamic Society of North America (ISNA) which is an offshoot of “Muslim Brotherhood”. It should be noted that US has tried to declare as a “Foreign Terrorist Organization” a couple of times in the past for it’s links with Kashmir terrorism, Hamas and other terror fronts.

Last year Bernie Sanders attended a controversial event that was organized by the Islamic Society of North America (ISNA). In order to get Muslim votes in the upcoming 2020 elections, he read the scripted speech that was written by his India hater Pakistani foreign policy advisor Faiz Shakir. None of the Leaders from any Arab or Islamic Nations participated or spoke at the event even remotely. Was it a coincidence or deliberate, Prime Minister of a FATF Grey Listed Nation that is on the verge of bankruptcy, Pakistan was invited via a Video link to speak at the same event, only to spew venom?

In his speech, Bernie sanders spoke against the Middle East countries like Saudi, UAE, India and China but deliberately didn’t speak of Human rights abuses by Army of the FATF Grey Listed Pakistan. Since the speech he read was drafted, it seemed he was fed with malicious ideas about India. He did not condemn Iran, Turkey, Hamas or hundreds of Islamist Radical Terrorist Organizations that are killing innocent civilians worldwide.

In our previous article Bernie Sanders Woos Jihadi Elements – Marriage of Leftists and Islamist Radicals we exposed Democrats links with the Muslim Brotherhood.

Rapidly Growing Muslim Population in the US

U.S. Census Bureau does not ask questions about religion, meaning there is no official government count of the U.S. Muslim population.

Muslim population has continued to grow at a very rapid rate, driven both by higher fertility rates among Muslim Americans as well as the continued migration of Muslims to the U.S. including the refugees as well as illegal immigrants.

In order to woo Muslim voters, several Democrats are openly working with the Radical Organizations.

We will continue with the US Fires Expose in our future articles and expose different actors and their motives. It is for the Intelligence Authorities and the American Public to evaluate these threat perceptions and take preventive steps.