The Stronger China Becomes, the Weaker it Becomes – A Look at the Patterns in Chinese History 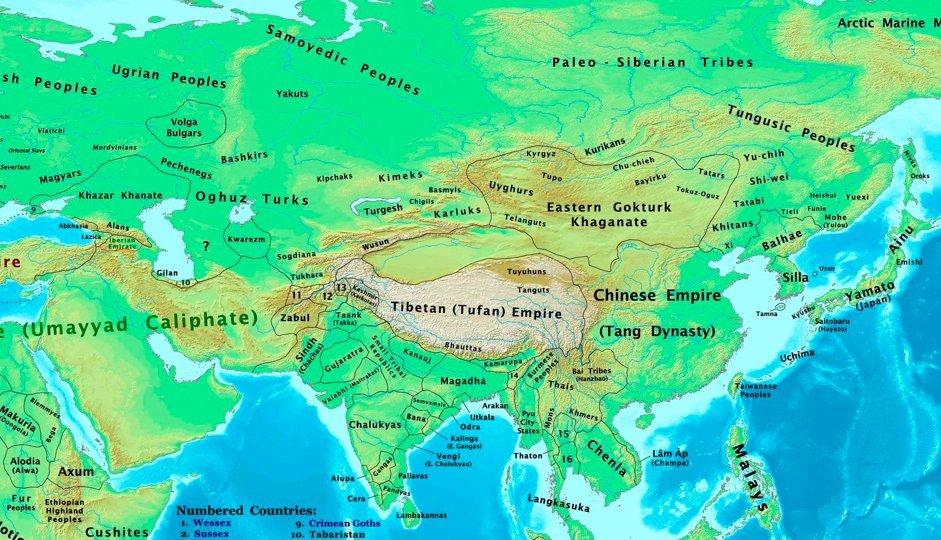 Looking a the history of China, one thing is clear. The Stronger China Becomes, the Weaker it Becomes. Lets look at the patterns in the Chinese History.

This single map is enough to depict the whole of Chinese history. All history, China and it’s interactions with the world is dependent on that narrow strip of land, what is known as Gansu corridor or Hexi Corridor. North of it ruled the Steppe Tribes – generally, they banded together under a single banner creating a massive Steppe Khanate – no population to support but armies leading on raiding and foraging expeditions, and even conquest but wilting away through a devastating counter conquest.

They simply didn’t have the numbers to fight a sustained war – Xiongnu, Xianbei, Gokturk, Mongols, Timurids – and many others – they were just blips on the world maps who disappeared as fast as they appeared as powerbrokers.

The South is almost uninhabited and not sustainable. Just think about it. Tibet has an area of almost half of India and population? 4000 times less. If you can comprehend the scale, the population density of Ngari Prefecture where India and China are fighting a war has a population density of 31 persons per 100 sq km – guess what? The area is not small. It’s a huge 300,000 sq km and supporting 95000 people. In fact, we don’t know of anyone ruling Central Tibet before 625 AD. All we know is of the kingdom of Zhangzhung in Western Tibet bordering India with it’s main source of sustenance, the trade routes passing through India.

Further down the Hexi Corridor is the harsh Taklamakan desert and steppes further. Talkamakan Desert is surrounded by a string of cities which survived on Chinese trade and had no other source of income – hence, it’s imperative for them that the trade stays unhindered. Generally, they voluntarily accepted the vassalage of China for this single reason. Now, what does all this mean?

China is an exotic, distant country which sends goodies through the trade route. All trade is controlled by the Central Asian Khanates who sometimes turned against China – after all, China is the richest country in the area and the most powerful country.

North of India and Persia!! There were raids deep into China, and there were counter raids into Central Asia chasing the tribes – who would even dream that western Tibet is named as Huna-Desa after the Xiongnu/Huns or a Mongol Empire ruling China with a firm grip for a century?

Summing up, this is the history of China – secure the borders to ensure peace in the country. And because of the hardships involved in securing the borders, China collapsed into chaos. This is what is called a Dynastic Cycle in China – A distant army or peasantry in the interior rebels due to the hardships they are facing because of the marauding mobs or lack of provisions. The rebellion spreads and topples the ruling government. After a few decades of chaos, order is established and the cycle repeats again.

Han, Jin, Tang, Qing – everyone received devastating blows due to those rebellions. In fact, the struggle of building the Great Wall of China in such inhospitable a place itself led to the collapse of the ruling Sui dynasty.

Further elaborating on the same, Peace means trade and prosperity in the interior of China. Prosperity means unequal distribution of wealth between the territories which benefitted from the trade and other areas.

People are unhappy they are taxed more, armies are unhappy centre is not supporting them enough. And this erupts into a rebellion in China major enough to kill millions and lead to the collapse of whole Chinese Government. It’s not a one-off affair – it happened again and again.

This is not the only thing you need to know. There is another interesting thing which you will observe when you try to fit China into the Mandala System.

Mandala means a circle. Now, treat China as a big circle. Treat all it’s neighbours as smaller circles overlapping with China – Korea, Steppe Khanate, Tibet, everyone. Now, have a closer look at Tibet. Sikkim and Bhutan are circles interacting with Tibet.

Now, how does this work? Let’s talk about the time when the Steppe Khanates are subjugated and are under peace with China. Take the case of Bhutan. Bhutan is a small circle interacting with Tibet and Sikkim. Tibet interacts with China but not with Korea.

Korea interacts with China but not with the Dai Viet. What does China ask for? Token vassalage. What do the Chinese offer in return? Near to zero interference in domestic politics and access to a free trade zone. The same thing percolates to secondary and subsequent levels.

There is another thing here. Let’s say Sikkim is fighting a war with Nepal. It’s not Tibet’s problem. Tibet will pitch in only if Sikkim requests Tibet. And if Tibet itself is not able to achieve anything (as what happened in the Ladakh-Sikh War), Tibet will petition China.

China comes settles the issue and goes back. Note, China goes back, it doesn’t stay. This system solidified post Mongol Era. So, what have we seen here? China offers a free trade zone, sovereign guarantee and non-interference in domestic affairs in return for token vassalage.

What does China get in return? Voluntary submission and extra depth so that attacking China proper is a near impossibility. Look at early 1700s. Dzunghars, Yarkand, Mongols and Khoshut surrounded China – if anyone needs to reach China, they need to cross one of them.

Even the Russians wasted all their strength from 1600 trying to take down these Steppe Khanates. They subdued everything, but by the time they reached China proper, they themselves became insignificant.

Situation looked perfect. But, what went wrong? Qing Empire, rather than following this Mandala structure, it conquered all these territories.

If you compare the four images, you will notice that, though boundaries changed, the first and third maps are almost identical, and second and fourth – the current map of China and the map of Qing China after the 10 Great Campaigns is more or less the same – and that’s the real issue with China. There are two major problems with a unified China –

Now, China is in a situation where people who have no option but to be Chinese vassals due to tyranny of geography are opposing the same thing which they are anyways going to do 50 years after China vacates those territories.

Make no mistake, even if you attempt to make Tibet an independent country, it has no option but to become a voluntary vassal of China – same goes for Korea, same for Mongolia and even the Dai Viet.

This is the crux of the problem – China is trying to manage territories which it never managed and it has no clue how to manage them. And the more the opposition China gets from these territories, the more the oppression in China – the army is not happy because it’s away from home in all impossible locations, and people are not happy because they are drained to fund these futile campaigns.

In two words, China’s weakness is it’s strength. The Stronger China Becomes, the Weaker it Becomes.

It’s a matter of time it’s strength rips China through another dynastic cycle. What will trigger the cycle this time? Ladakh? COVID? Something else? There is no answer. But, one thing is certain – it’s time for another Dynastic Cycle and a relapse to the Chinese Mandala Model.