Maryam Rajavi Called for Comprehensive Embargo Against Religious Dictatorship in Iran. Accused Iran of Exporting Terrorism and Terror Financing in Other countries. 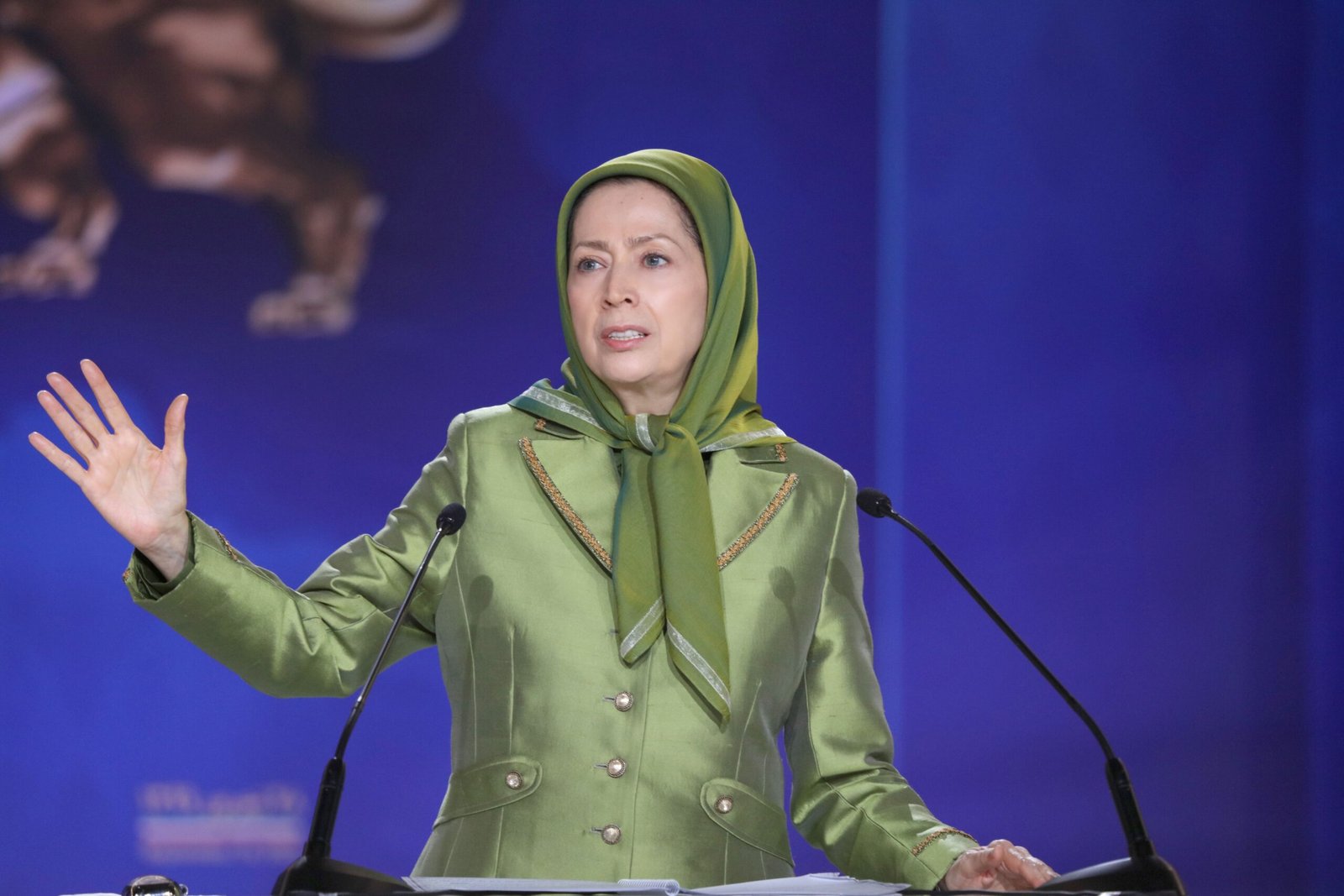 Speaking from Washington, DC on Summit to Support a Free Iran, Maryam Rajavi called for comprehensive embargo against religious dictatorship in Iran. She also accused the Mullah government of Iran of exporting terrorism and terror financing in other countries. She also raised the issues of Human Rights for the People of Iran, and called upon the International community for recognition of the Iranian people’s Resistance and the struggle for freedom in Iran. She also questioned United Nations and Security Council for not acting against the Human Rights Abuses by the Khamenei and other regime leaders and officials.

Maryam Rajavi urged the United Nations, and the UN Security Council in particular, to re-impose the six UN resolutions against the clerical regime in Iran. Otherwise, Khamenei will continue to ravage the nation as his regime’s survival depends on murder and suppression. If Khamenei were to stop executions, he would lose control of the situation and uprisings simmering in the depths of Iranian society would erupt and overthrow the mullahs’ religious fascism.

She further said, “Khamenei and Rouhani are deliberately sending people to their deaths by exposing them to the coronavirus. But they have in fact adopted the strategy of causing mass human casualties to protect their regime from the Iranian people’s protests and from the danger of being overthrown.”

Maryam Rajavi further accused Mullah Regime of Iran for exporting Terrorism and financing Terrorists in other countries. She said, “Members of the mullahs’ parliament estimate that the IRGC has spent up to 30 billion dollars on its war operations in Syria. The actual figures are of course several folds higher. The IRGC additionally spends exorbitant sums of money on the Lebanese Hezbollah, Kata’eb in Iraq, the Ansarallah (Houthi) militia in Yemen and other proxy groups.”

She said, “The regime has been executing prisoners on political charges, including Moharebeh (waging war on God), rebellion, and participating in the uprisings. A number of prisoners are currently on death row in Dastgerd Prison of Isfahan, the Great Tehran Penitentiary, the Central Prison of Mashhad (Vakilabad), the Gohardasht Prison of Karaj, the Shaiban Prison of Ahvaz, the prisons of Urmia, Khorramabad and Sanandaj, as well as a number of supporters of the PMOI/MEK in Evin Prison in Tehran.”

She added, “The experience of the past 40 years of the clerical regime’s rule in Iran has shown that it has continued its rule by committing 120,000 executions on political grounds, including the 1988 massacre of 30,000 political prisoners, 90 percent of whom belonged to the PMOI/MEK.”

She said, “As you are aware, the Iranian Resistance has been exposing the regime’s secret nuclear, missile and chemical projects since three decades ago. We seek a non-nuclear Iran that can live in peace and solidarity with its neighbors.”

Maryam Rajavi also spoke about the Damaging western policies that have aided and abbetted the Islamist Radial Mullah Regime in Iran. She said,

At this point, allow me to recall the devastating consequences of the policies which have aided the clerical regime in continuing its crimes by emboldening and granting them immunity.

They include the political and financial concessions unjustifiably granted to the regime in the 2015 nuclear agreement (JCPOA); the freezing of six UN resolutions and lifting the sanctions in favor of the mullahs; and the opposition to the extension of the arms embargo against the regime.

I must emphasize that any government coveting for deceitful inducements from the clerical regime would be nourishing a viper in their bosom.

It is a mistake to think that a reduction of international sanctions will result in the regime abandoning its belligerence. Ironically, it was under the auspices of the JCPOA that the Iranian regime’s terrorism ravaged Europe.

Recently, in an article published by Le Figaro, the U.S. Secretary of State rightly pointed out that the Iranian regime answered the West’s appeasement with bloodshed and belligerence. He further noted that the policy of appeasement had no benefit and it advanced the Iranian regime’s grand strategy. He reminded that the people of Iran are the primary victims of the savagery of this regime and that the regime’s security forces had killed some 1,500 protesters over the past year alone.

Yes, the Iranian Resistance was the first to warn that giving concessions to the mullahs would embolden them even more.

Ten years ago, in a speech at the European Parliament in Brussels on January 25, 2011, and before the slaughter of Ashraf residents on April 8, 2011, I pointed out that giving concessions to this regime, like feeding the crocodile, has made them greedier.

Now, after a decade, consider the outcome:
For the first time in Europe’s modern history, we see a diplomat who had delivered a bomb to the terrorists was arrested in Germany. He has been jailed in Belgium for the past two years. Just imagine what would have happened if this bomb had exploded at our gathering in Villepinte near Paris.

In addition, another seven of the regime’s diplomats have been expelled over the past two years from France, Albania, and the Netherlands.

On the other hand, the Iranian people’s uprisings – from December 2017 to November 2019 and January 2020 – have dispensed with all illusions about the stability of the clerical regime.
Today, the regime is at its weakest point ever. In such circumstance, giving assistance to the mullahs will only increase the pain and suffering of the people of Iran, but of course, would not be able to save the regime from its certain downfall.

“Why is it that the United Nations and the Security Council do not compel the clerical regime to admit international delegations to visit Iranian prisons and prisoners, particularly the detained protesters?”

She further said, “The dossiers of the 1988 massacre and the massacre of protesters in November 2019 must be referred to the UN Security Council. It is time to stop granting immunity to Khamenei and other regime leaders and officials. They must face justice.”

As for sanctions, I must reiterate that the people of Iran were attacked and slaughtered last November for protesting against gasoline price hikes. They want the pipelines that fuel the mullahs’ killing machine and terrorism to be destroyed.

According to official reports, billions of dollars of oil revenues disappear every year. In other words, they end up in the coffers of Ali Khamenei.

What we say is this: Boycott the clerical regime. Boycotting the regime helps the fight against terrorism, against suppression and against corruption. But every single dollar given to the regime will turn into a bullet that is fired into the hearts of youths in Iran, Iraq, Syria and Yemen.

Our people do not want uranium enrichment plants. Neither do they want a ballistic missiles program, or the regime’s criminal wars in Syria, Iraq, Yemen and Lebanon.

Regarding the resistance and struggle for freedom in Iran, I would like to recall one of the last messages of the martyred wrestling champion, Navid Afkari.

Referring to his struggle against the clerical regime, he said that he is fighting against the most ruthless adversary in human history.

Yes, this is the most ruthless adversary in human history. And there is no doubt that it will be toppled as a result of the struggle and uprisings of the courageous youths and the great Army of Freedom.

Complete transcript of Maryam Rajavi address to UN Summit is available at https://www.maryam-rajavi.com/en/item/maryam-rajavi-human-rights-iran-resistance-freedom-un-general-assembly-summit.

United Nations and Security Council has yet again proved that they are puppets in the hand of China that is friendly with Iran as China VETOs any resolutions against Iran.

If United Nations and Security Council are unable to act despite the catastrophic Human Rights Abuses by Mullah Regime in Iran, shouldn’t United Nations be disbanded and a new organization be made minus China and take strict action against Iran?