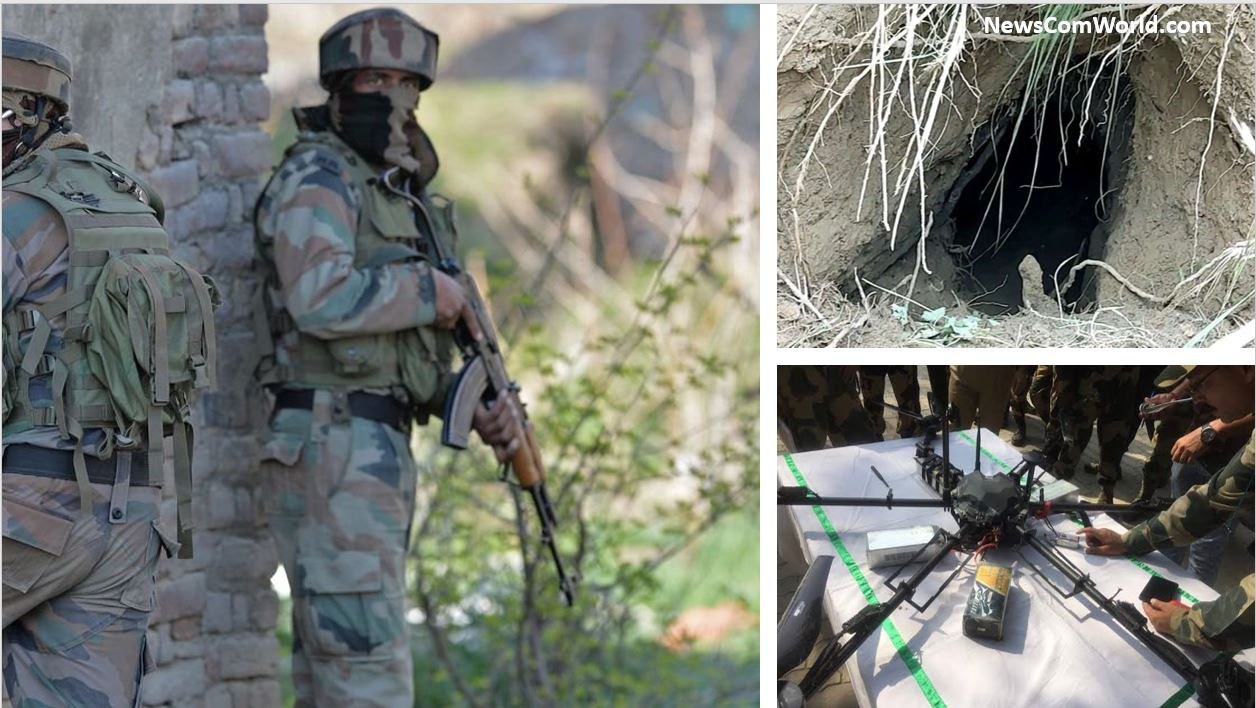 “Digging of tunnels beneath the IB is part of the nefarious designs of Pakistan to facilitate infiltration of terrorists into this side to step up terrorism,” Singh told reporters in Samba district after inspecting the recently discovered 170-metre tunnel at Galar village along the IB.

The tunnel with a depth of 20-25 feet and originating from Pakistan was found by a BSF team near the border-fencing on August 28.

“I saw this huge tunnel which is almost similar to the one detected in Chanyari in 2013-14. After the Nagrota encounter, we had received specific inputs that infiltration had taken place through a tunnel and was searching for it,” the DGP said.

The investigation is on but the ground indicators suggest that the tunnel was used by Pakistan in the past to push Islamist Radical Terrorists in to India and there may be many more such tunnels.

On the recent recovery of sophisticated weapons, including an M-16 rifle, from a Kashmir-bound truck near Qazigund, he said the investigation is going on and it is believed that the arms were airdropped using drones in Samba sector.

Two overground workers of JeM, who were transporting the weapons in a truck, have identified the place in Samba from where they picked up the consignment for delivery to terrorists active in south Kashmir, officials said.

Again on 22nd September, 2020 huge quantity of Arms and Ammunition were recovered that were air dropped using drones by Pakistan Army and their Intelligence agency ISI for use by Terrorists on Indian side.

The accused Lashkar-e-Taiba have been identified as Rahil Bashir and Amir Jaan alias Hamza from Pulwama while Hafiz Yunus Wani is from Shopian. Indian Currency of one lakh cash was also recovered from the three Terrorists. LeT is headed by UN-designated global terrorist Hafiz Saeed, and operates mainly from Pakistan.

Indian Border Security Force BSF, which mans the borders, has been put on high alert as the recurrence of weapon-dropping drone sorties have gone up.

A top official said eight such sorties were conducted in recent times and have come to notice.

One such drone was recently shot down in Kathua by the BSF while three drone sorties were intercepted near Jawahar tunnel apart from the latest.

However it is not known, how many such weapon drops by Pakistan Army into Indian Union Territory of Jammu and Kashmir or Indian State of Punjab have gone successful and how many guns and ammunition has already reached the Terrorists hands to kill the innocent civilians in India.

If you check the old news reports from 23-August 2020, there was Intel that the Indian Border Security Force BSF, India’s first line of defence with Pakistan and Bangladesh, was alerted that Pakistan Intelligence Agency ISI plans to pump in consignment of drugs/arms/ammunitions inside India with the help of drones.

However despite all these intelligence Inputs and atual bringing down of Pakistani Drones and seizure of Arms dropped by Pakistan into Indian Territory using Drones, Pakistan thrives in Terrorism Export Business while FATF sleeps.

Based on specific input a joint team of Army, Police & CRPF launched a CASO in Sirhama. As the team encircled the suspected spot, the hiding terrorists fired. 2 Pakistan sponsored Terrorists were killed in overnight encounter with Indian Security Forces.

On Thursday 24-September 2020, a young lawyer was shot dead by Pakistan sponsored terrorists outside his residence in Srinagar, Union Territory Jammu and Kashmir, India. The lawyer, Babar Qadri, had expressed that he feared for his life a few days ago.

On 21-September 2020, an Indian soldier was wounded in an encounter that started Monday evening at village Nowhar in Chrar-e-Sharief area of Central Kashmir’s Budgam district in India.

Kashmir witnessed fewer incidents of militancy-related violence after New Delhi stripped the erstwhile state of its quasi-autonomous status. According to data provide by the federal Home Ministry in Parliament, there were 443 incidents of violence during the 12 months prior to August 2019. Last year (from January to July 15), a total of 188 terrorism-related incidents had taken place in the valley, while this year around 120 such incidents were recorded during the same period.

However, there have only been 206 violent incidents since 5 August 2019, according to data provided by the ministry.

The above mentioned Terrorist incidents are only a few of the many Terrorist attacks by the Pakistan Army and Pakistan Intelligence Agency ISI Supported terrorists in India. But the question arises, why is the Financial Action Task Force FATF turning a blind eye to Terrorists and terrorism sponsored, financed by FATF Grey Listed Terrorist Nation Pakistan? With all the evidences present, Why is FATF not black listing Pakistan as a Terrorist Nation? Is that because China heads the Financial Action Task Force (FATF) which is the global money laundering and terrorist financing watchdog?

What stops FATF to get evidences from Indian Security Forces and black list Terrorist Nation Pakistan? Is FATF Influenced by China even though the FATF current President Marcus Pleyer is from Germany?

Ask any one in Afghanistan Security Forces and NATO forces deployed in Afghanistan. You will hear tales of Pakistan sponsoring Taliban Terrorists in Afghanistan. However FATF will continue to either sleep or turn Blind eye to Pakistan’s terrorism under pressure from China.