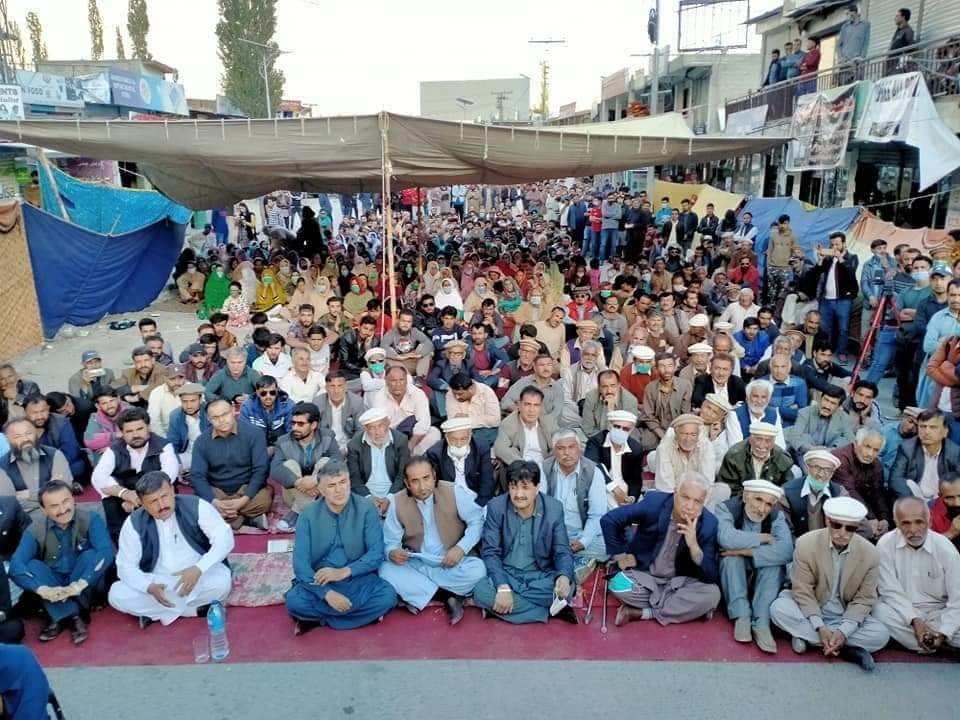 Gilgit-Baltistan is part of Union territory of Ladakh, Republic of India but is currently under illegal occupation of Pakistan since 28th April 1949.

The region is rich in minerals but locals live a miserable live under occupation Pakistan army. Illegal Occupation of Gilgit Baltistan and Chitral region by Pakistan has acted as a curse and converted a rich diversified and historical land into poverty stricken land where even the basic human rights are denied to the residents by the Punjabi Pakistan.

Raising slogans of – Ye jo dehshatgardi hain, uske peechhe vardi hain (Pakistan Army is behind the Terrorism) – thousands of protestors have taken to streets for the past five days. Visuals showed political leaders, men, women and people from across strata taking to streets against the suppression by Punjabi Pakistan government and Pakistan Army.

A wave of anger has spread across towns and villages of the illegally occupied Gilgit Baltistan after the Pakistani administration launched a crackdown against the activists, rebellious political leaders and anybody who has not followed the arbitrary orders of the government.

People across the region have taken to streets, demanding the immediate release of activists who have been falsely held and have been awarded severe punishment. They carried pictures of Baba Jan, a prominent local activist who is serving a ninety-year sentence on trumped-up charges, and shouted anti-government slogans. Protestors said that the authorities have grown afraid of the increasing resistance in the region.

Amzad Hussain, a local political leader from Gilgit Baltistan said that the government of Pakistan had been exposed at the global forum for its authoritarian attitude and it was now using all strategies to gag the voice of the people.

Baba Jan raised voice demanded compensation and rehabilitation by the Punjabi Dominated state government for the ones affected.

On 11-Aug 2011, a protest was held by the affected families on Karakoram Highway, they blocked the highway when Chief Minister of Gilgit Baltistan Syed Mehdi Shah was due to travel. To disperse the crowd and make way for Chief Minister’s convoy, police fired tear-gas & gunshots.

As a result, a protesting man & his son were killed. Instead of arresting perpetrators, Punjabi dominant state government arrested voices against state brutality including Baba Jan and 11 other activists.

In spite of eyewitnesses against police, Baba Jan Hunzai and 11 others were sentenced to life in prison.

Today, Baba Jan & others are imprisoned in Gahkuch Jail, Gilgit Baltistan. The prisoners have suffered through intense physical and physiological torture. In Feburary 2019, Baba Jan’s health deteriorated due to multiple illnesses but he was denied access to medical treatment.

Hamza Shafqat is Deputy Commissioner of Pakistan capital Islamabad. Here he is present as chief guest, attending large rally of anti-Shia group. So if administrative head of capital city himself is anti-Shia then who is going to protect life, honor & rights of Shias residing there?

Bordering China, Afghanistan, India, Tajikistan and Pakistan, GB is the gateway of CPEC. Spread over an area of 72,000 square kilometres, it is more than five and half times the size of Pakistan Occupied Kashmir.

The Punjabi Pakistan has played political football with its people. They have been denied meaningful self-governance and fundamental rights in the name of ‘disputed territory.’ While they pay all federal taxes, they have no representation in the say of the governance of Gilgit-Baltistan and no right to vote in national elections, no representation in Indus River System Authority (IRSA) and no share in the National Finance Commission NFC. The local Legislative Assembly has no powers which are exercised by the prime minister of Pakistan who may have never even visited the area.

The shamilaat lands of the people have been taken over forcibly by the state. There are genuine apprehensions that as CPEC progresses and the true potential of the area blossoms, these lands will be distributed like melons by those known for their obsession for land grab.

Over the years, Pakistan the decades, Pakistan has changed the demography of Gilgit-Baltistan by settling Punjabis, Army Officers and their families in Gilgit Balitsitan

With a hydro potential of over 40,000 MW, its people live with 18 hours of load shedding. State resources are available for metros, for Nandipurs, for the golf courses, for doling out of scores of acres in retirement benefits to the powerful, but not for corridor projects in GB.

Denying the people of GB their basic rights and self-governance in the name of ‘disputed territory’ is the greatest fraud played on them.

The 21st Amendment which set up military courts was extended to GB. But the 18th Amendment is not extended. Why? Because of fears that mineral wealth will then have to be transferred to its people. Islamabad will then no longer be able to exploit it as its CNG station or as ATM card.

Under which declaration of the UN are the fundamental rights or empowered local self-governance denied to GB? The UNCIP Resolution of August 13, 1948 calls for Local Authority till plebiscite. Local government does not mean Islamabad usurping all powers. Indeed Pakistan is violating UNICP resolutions.

Fortunately, the youth of GB are finally seeing through the falsehood and they are rising. They are asking searing questions. They openly ask that if the territory is ‘disputed’ why the CPEC should pass through it to benefit Pakistan and why Bhasha Dam is built here.

If all coercive laws like the Anti-Terrorism Act and the 21st Amendment are extended to GB, why not human rights related laws, they also ask.

If citizens of Indian Jammu & Kashmir have rights as equal citizens, why not the people of GB? People of Indian J&K are eligible to become members of parliament, president and prime minister and also appointed to the highest judiciary. However people of GB cannot have the same rights in Pakistan.

We call GB a strategic area and treat its people as cannon fodder. For too long the tribal areas were similarly treated. The tribal youth have now gathered under the flag of Pakhtun Tahaffuz Movement (PTM) and called the bluff.

The Punjabi Pakistan has forced Baloch youth to climb mountains in defiance and frustration. Time is ripe for the Gilgit-Baltistan youth also to follow Baloch brothers and get rid of Punjabi Pakistan and its exploitation.

Remember the mountains of GB are higher than that of Balochistan. Remember also the warning of Zulfikar Ali Bhutto that a time comes when mountains also weep.