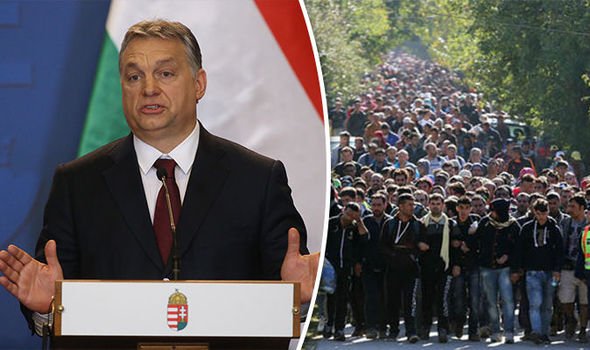 Hungary’s PM Viktor Orbán lashed out against George Soros supported by the international media, Brussels bureaucrats and NGOs disguised as civilians, for seeking to accelerate Migration.

Billionaire financier George Soros is seeking to accelerate migration in order to destroy nationalism and hand power over to the global elite, writes Prime Minister Viktor Orbán in a long-form article for Magyar Nemzet where he also discussed topics such as political correctness, liberal democracy, and Hungary’s upcoming 2022 election battle.

“The greatest threat to national self-determination today is the global network of open society advocates which seek to abolish national governance. The goals of George Soros’s network with unlimited financial and human resources are clear. By accelerating migration, they will create mixed-ethnicity, open societies in order to dismantle national decision-making and put it in the hands of the global elite,” writes Orbán.

Orbán states that despite this goal, national resistance has been strong, which accelerated in the early 2010s, of which Hungary has been a considerable force from the very beginning. He writes:

“The 2010 change of government [in Hungary] and constitutional revolution provided an opportunity to dismantle the frameworks and structures that serve the interests of the liberal and colonizing global elite. To this end, a new constitution, a number of pieces of legislation and unorthodox measures have been enacted. National politics broke with narrow elitist and ideology-driven governance and built the new political course in line with the will of society. It is based on freedom, that is, the ability to make independent decisions.”

Orbán continued by saying, “The struggle between the global elite and national resistance has not yet been decided”, and that Central Europe remains a source of such resistance.

Hungary is a target for rule of law mechanisms

A large component of this struggle has to do with Soros’s international organizations, most notably the Open Society Foundation, which operate through supranational organization of the EU, which has continuously targeted Hungary and Poland through “rule of law” hearings, which liberal forces are now trying to use to cut of EU funds to both countries.

He says that the system, which “they tend to call rule of law, is merely a rule of blackmail that is vulnerable to intrusion from Soros’s network” and a tool for attacking “national communities” for the benefit of “the big dogs of global capital”.

“The enthusiasm of Christian Democrats is fairly muted because they see that such organizations are inevitably prone to arbitrariness, which they like to call the rule of law, while it is merely the rule of blackmail, vulnerable to intrusions akin to those of the Soros network, and if they have to choose between the citizens of national communities and the top dogs of global capital, the will ultimately always choose the latter. The citizens of the European nations soon realized that today’s European institutions do not serve them, but the interests of George Soros. They are unwilling to swallow the Brussels boasting that a financial speculator, who made his fortune by destroying others, is lurking in the corridors of Brussels to offer selfless help to Europe.”

One of the clearest manifestations of Soros’s actions and the increasingly undemocratic inclinations of the EU in recent times is how Brussels handled the issue of Polish presidential elections, with the EU actively supporting the liberal opposition against the nationalist Law and Justice party (PiS). Orbán writes:

“We could see what happened in the Polish presidential campaign. Even in the spring, it seemed that the Polish left was in ruins, and their inherited disputes would make their candidate unlikely from the start. That was not the case, the candidate on the left, backed by the Soros network, the Brussels elite and the international media, had caused the national side to fight hard in a few weeks. Andrzej Duda finally managed to surpass his left opponent in a fierce fight.”

Orbán believes it is a sign of what is to come for Hungary, “We should not deceive ourselves: the global elite will apply the same strategy in Hungary in the 2022 election campaign.”

He points to to the “fallen left” led by Ferenc Gyurcsány and its youth organization, all backed by “their billion-dollar sponsor George Soros. They are the forces of the past who once ruined the country.”

“In 2022, they are preparing for a decisive battle. Behind them will be the international media, Brussels bureaucrats and NGOs disguised as civilians. There can be no doubt that everything will be done for power and money. It is time for us to be in order too. After difficult years of governance, we need to return to the electoral battlefield. It’s time to take a break so we can ride out at the right moment. A great battle awaits us in 2022. Get ready.“

Orbán also addressed the top of speech policing in the West, writing that “Political correctness, that is, the rebellion against old libertine doctrines that is changing our ways of speaking, is expanding. More and more, a stiflingly narrow single right way of speaking is here — the only correct conception of democracy, the only correct interpretation of Europe and the West.”

“The attempt to escape is not easy in itself, and the risk of punishment is significant, including expulsion from academic life, job loss, stigma, and punishment from universities. Examples of this phenomenon are slowly becoming commonplace.”

He continues writing that even if thought leaders are able to get past the “well-paid and clock-watching liberal border guards” that serve as censors, there is also the issue of people of the West increasingly intolerant of ideas that challenge the reigning liberal orthodoxy, writing, “The praise of any hint of nationalism still makes the German nation tremble even if it was written by Professor Hazony from Jerusalem. And no matter how we deliver the idea of illiberal democracy, it sounds awful to the German and Anglo-Saxon ears. Even today.”

Orbán writes that the rebellion against liberal spiritual oppression is not only widening but also deepening, and says Christian Democratic parties, particularly in Hungary and Poland, are fighting against the embrace of liberalism. The two countries applied the “emergency brake… on weakening nations, eradicating religious tradition, and downgrading and mocking the family.” As a result, Central Europe was able to pull Christian Democrats and conservatives back from the “edge of the abyss”.

“The liberals – for philosophical reasons hailing back to [German philosopher Emmanuel] Kant and not detailed here – believe that all countries, including those governed today as non-liberal democracies, should be forced to accept this form of government. The Christian Democrats, on the other hand, reject such an alien policy because they believe that different societies are held together in different ways and in times of peace, as the Arab Spring recently proved, liberal democracy can bring collapse and chaos, more harm than good. That is why we also support Donald Trump’s victory, because we are well aware of the foreign policy of American democratic governments based on moral imperialism. We were forced ourselves to grudgingly taste it. It didn’t taste good, so are not asking for a repeat.”

On the subject of national governments Orbán writes:

“Our policies are also clashing on what is commonly referred to as subsidiarity in Brussels. Liberals say it is good to transfer as many national governmental powers as possible to international organizations. That is why they clap politely, that is why their eyes become foggy and their heart beats faster whenever any international organization is given a new competence, or task, and of course, a corresponding horse to mount and weapons, lending further recognition and encouragement to universal ideas, European values and universal human rights.

Separation of church and state

Orbán also addresses the issue of separation of church and state:

“The liberals also think, and for some mysterious reason, defend in the most controversial way, that a universal and common sense is sufficient for a just and morally sound government, and that there is no need for the absolute values ​​revealed by God and the religious, biblical tradition that grew out of it. Moreover, a partition must be built between the church and the government, the influence of religion must be squeezed out of the world of public life. Instead of separation, while preserving state and ecclesiastical autonomy, [Christian Democrats] seek to integrate religion into the life of society, while maintaining a spirit of tolerance for religious views.”

Will Europe and other countries follow the path shown by Hungary’s PM Orbán?

Or will Europe lose to George Soros and the Global Elite who do not respect the unique culture in any country?