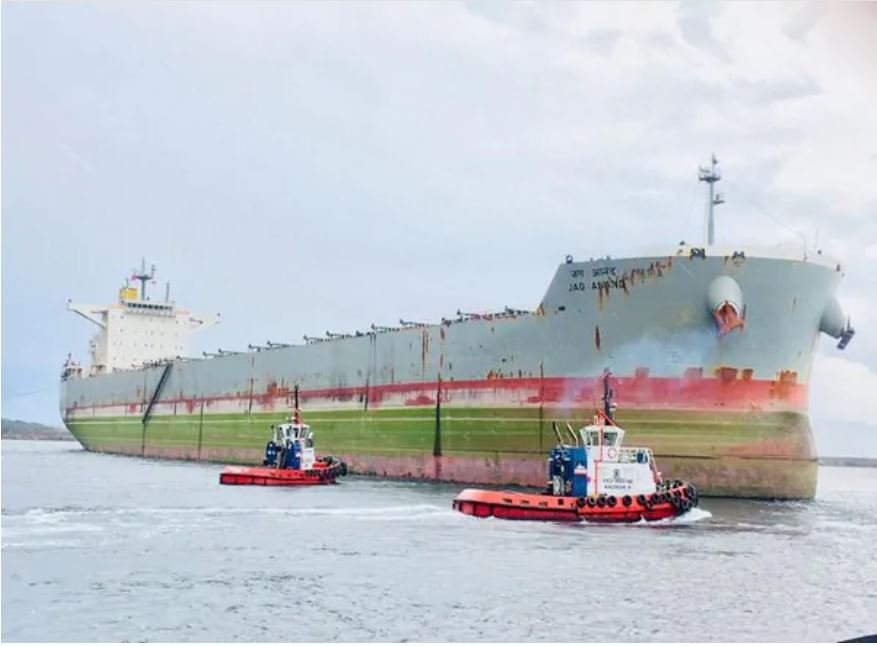 Hypocrite China holds cargo ships from other countries at its Ports for months, while expects Chinese cargo ships to be cleared in other countries ASAP. More than 20 Bulk carriers including capesizes and panamaxes carrying Australian coal have been lining up at major coal ports in north China, waiting to unload cargo at Tangshan’s Jingtang Port for around five months, due to the import restrictions China has implemented on Australian coal. There are also many ships under the same situation at nearby Caofeidian Port and Huanghua Port.

China has often adjusted its coal import policies in the past couple of years as a tool to control its domestic market and occasionally impose restrictions on import shipments to encourage demand for domestic supply.

China’s decision to construct a raft of new very large ore carrier (VLOC) terminals was being interpreted by some analysts as part of a bigger geopolitical play to cut the nation’s reliance on Australia for its iron ore imports amid a severe souring of diplomatic ties between the two Asia-Pacific nations.

“Commentary on the move has speculated that Beijing is seeking to ensure greater ‘iron ore security’ for the future, not only by opening itself to a wider range of of markets, including Brazil, but also to countries where there is less chance of political disagreement,” Alphabulk pointed out in a report from July.

Australia, which exports 90% of its iron ore to China, has been a vocal opponent of China’s telecoms company Huawei, and has also joined the US in opposing China’s maritime claims in the South China Sea. It was also the first country to come out and call for an international enquiry into China’s handling of Covid-19.

The news came to light recently when An Indian merchant ship ‘Jag Anand’ with its 23 Indian crew members on board is stuck at China’s northern ‘Jingtank’ port since June and crew members are seeking help to return home.

According to ANI, the crew members of the ship contacted the media agency on the grounds of anonymity and gave a brief detail of their current unpleasant situation and how many members are suffering from health issues and running short of medicines with each passing day.

A crew member told ANI over the phone, “We boarded the ship in January. Currently, we are loaded with around 1.70 lakh tons of Australian coal. This ship was chartered by a private entity. We left from Australia in May and arrived at the Jingtang port in China by June 13 and for five months we are here stuck at the Chinese port with no updates.”

“We are 23 Indian crew members on board and living in a very unpleasant situation. We want to return to our homeland. Chinese port administration is not allowing us to unload our cargo here and they are not giving a reason either. We informed our company about the situation and they are trying to set up communication through diplomatic channels,” he added.

Another crew member added, “We want to go back to our homes, we have been on the job for over 15 months and haven’t seen our families. Many crew members are running short of medicines. We are afraid of the pandemic too. Our simple and humble request to the company’s management is to talk to the company which chartered the ship and allow us to unload cargo and go back home.”

The Jag Anand merchant ship belongs to Mumbai based Great Eastern Shipping Limited and the company’s senior official has informed to Director General (DG) Shipping office to take the matter to the Chinese counterpart.

“The company is doing all the possible efforts to sort the matter at the earliest, we have raised the matter with DG, Shipping and Ministry of External Affairs (MEA) too,” said an official from the Shipping Company.

Meanwhile, the crew members have also urged their company to find an alternate rescue plan by talking to Japan if China is not ready to allow the unloading of cargo.

“We are ready to sail the ship to the nearest Japanese port and change the crew member. But the company told us that all these efforts were under process,” another crew member told ANI.

Many crew members have high blood pressure, diabetes, hypertension and some were injured during the journey and are running short of medicines and first aid.

The family members of the crew has also written a letter addressed to Prime Minister Narendra Modi and External Affairs Minister S Jaishankar regarding the situation and sought immediate relief.

The letter read, “Due to severance of diplomatic ties between China, the Australia vessel is on anchor since June 13. The Customs authorities have not cleared the concerning cargo. At present, most of the crew have ended their stipulated contractual obligation and been on board for more than a year, some of them even exceeding 15 months. Despite various attempts by the company through diplomatic resources, there has been no respite to crew sufferance who have been inflicted with not only physical stress but mental fatigue. During this time of the pandemic, families of the crew are alone which further adds to the aggravation of onboard staff. The deteriorating health of crew members is also a major concern with some being declared unfit by the company doctor.”

The Chinese government has changed the import rules and regulation on Australian coal, forcing around 20 bulk carrier queue up at the China port to unload their Australian coal over the last few months.

Shouldn’t Australia, India and other countries ban all imports from China and instead explore markets in friendly countries?

As China holds cargo ships from other Countries at its Ports for Months, what is stopping other countries like Australia, India and others to hold Chinese cargo ships at their ports indefinitely?

Big question is after the Bio-Terrorist China launched its Bio-weapon attack on the entire world killing over 1.26 Million people worldwide using its Bio-weapon Chinese Corona Virus, why is the world still importing from the same Bio-Terrorist? Shouldn’t all the countries unite and place trade sanctions on China?