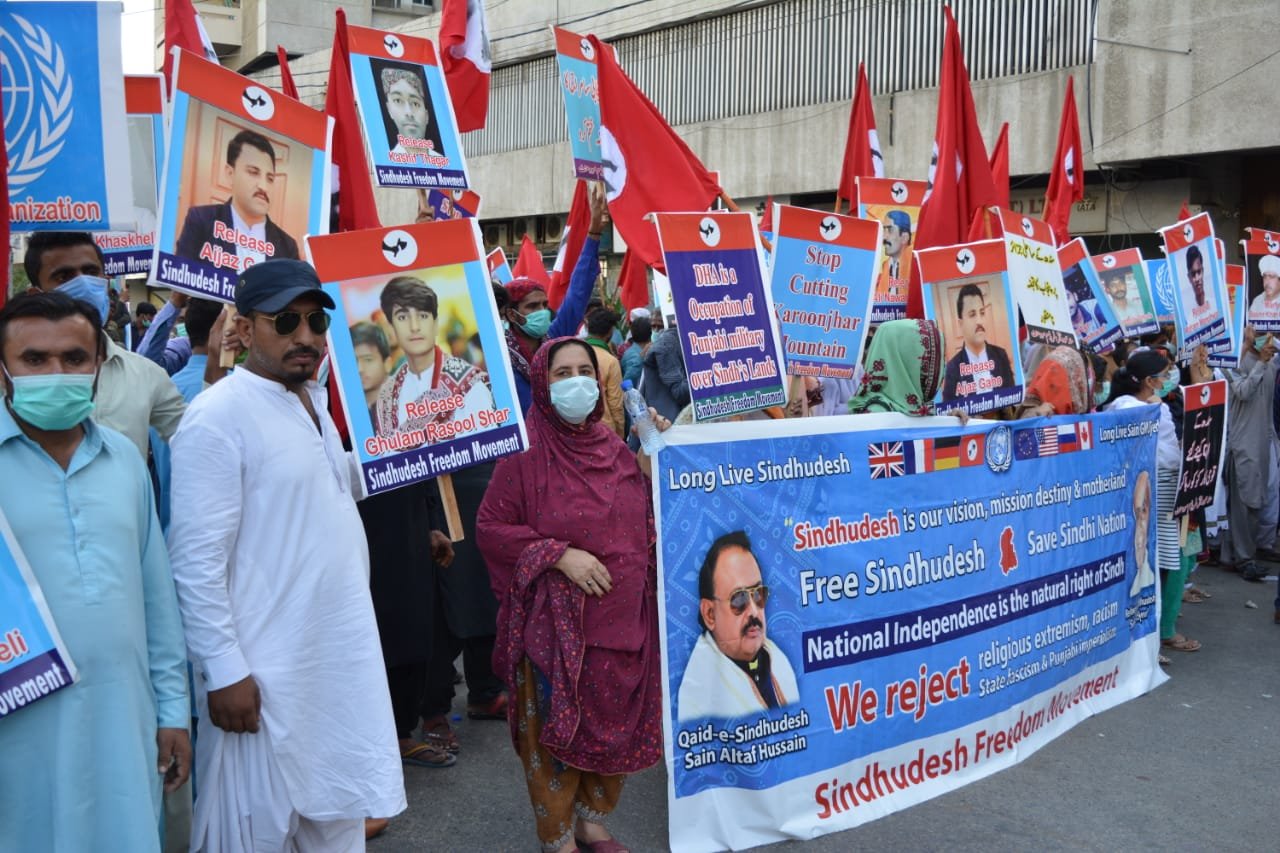 Sindhudesh Freedom Movement has gained momentum in Pakistan Occupied Sindh region. A large number of Sindhi activists and residents took to streets and protested against what they call illegal occupation of their land by Pakistan on Sunday 8-November 2020.

Held under the banner of ‘Sindhudesh Freedom Movement’, the demonstration was aimed at demanding freedom from the clutches of Pakistan.

The demonstrators carried placards reading: “Sindhudesh is our vision, mission, destiny and motherland”. People also held pictures of Sindhi political activists and leaders who have been abducted or killed for their Sindhi nationalism.

In an exclusive statement given to ANI, Shafi Burfat, the chairman of Jeay Sindh Muttahida Mahaz, a Sindhi nationalist party said, “Sindh is a colony of Punjabi imperialism and a victim of its atrocities and tyranny. Punjab has continuously been exploiting our natural and mineral resources including the sea, the river, the national wealth, the lands, the oil, the gas, the coal, the ports, and the sea islands have been plundered by Punjab for the last seventy-three years with both hands as spoils of war. There is no political, economic, moral, and historical basis for Pakistan’s existence after the separation of Bangladesh in 1971.”

While Pakistan’s constitution recognises Sindh as its province, activists say that the region has for decades been subjected to state sponsored atrocities. Home to the majority of Hindus, Christians, Ahmadis and other minorities, the region has been discriminated against with impunity.

This region reports cases of hate crime, anti-minority crime, forced conversions and marriages on almost every day basis and any resistance against fundamentalism is muzzled with police high handedness and the activists are labelled as terrorists.

“Present-day Pakistan is a fascist state imposed on historical nations through the fascist Punjabi military might for the benefit of Punjab. The oppressed nations do not need Pakistan because the historic political and economic interests of Pakistan and the occupied nations are quite conflicting. Sindh and Balochistan, POK Gilgit Baltistan Pashtunistan and Seraiki Des do not need Pakistan because Pakistan is nothing but the veil of fascist tyrannical imperial Punjabi empire and occupation,” Burfat added.

While the Sindhudesh movement started as early as the 1950s, it was the liberation of Bangladesh in 1971 that prompted Sindhis to demand a separate homeland. Unique non-Punjabi ethnicity, culture justifies their demand.

Will the International Community help Sindhudesh Freedom Movement and help forming of smaller nations like Balochistan, Sindhudesh, Pashtunistan to demolish the Terrorist Producing infrastructure in Pakistan?

Shouldn’t the International community consider that formation of small nations like Balochistan, Sindhudesh will go a long way in defeating the Chinese CPEC that is responsible for looting resources from these nations?