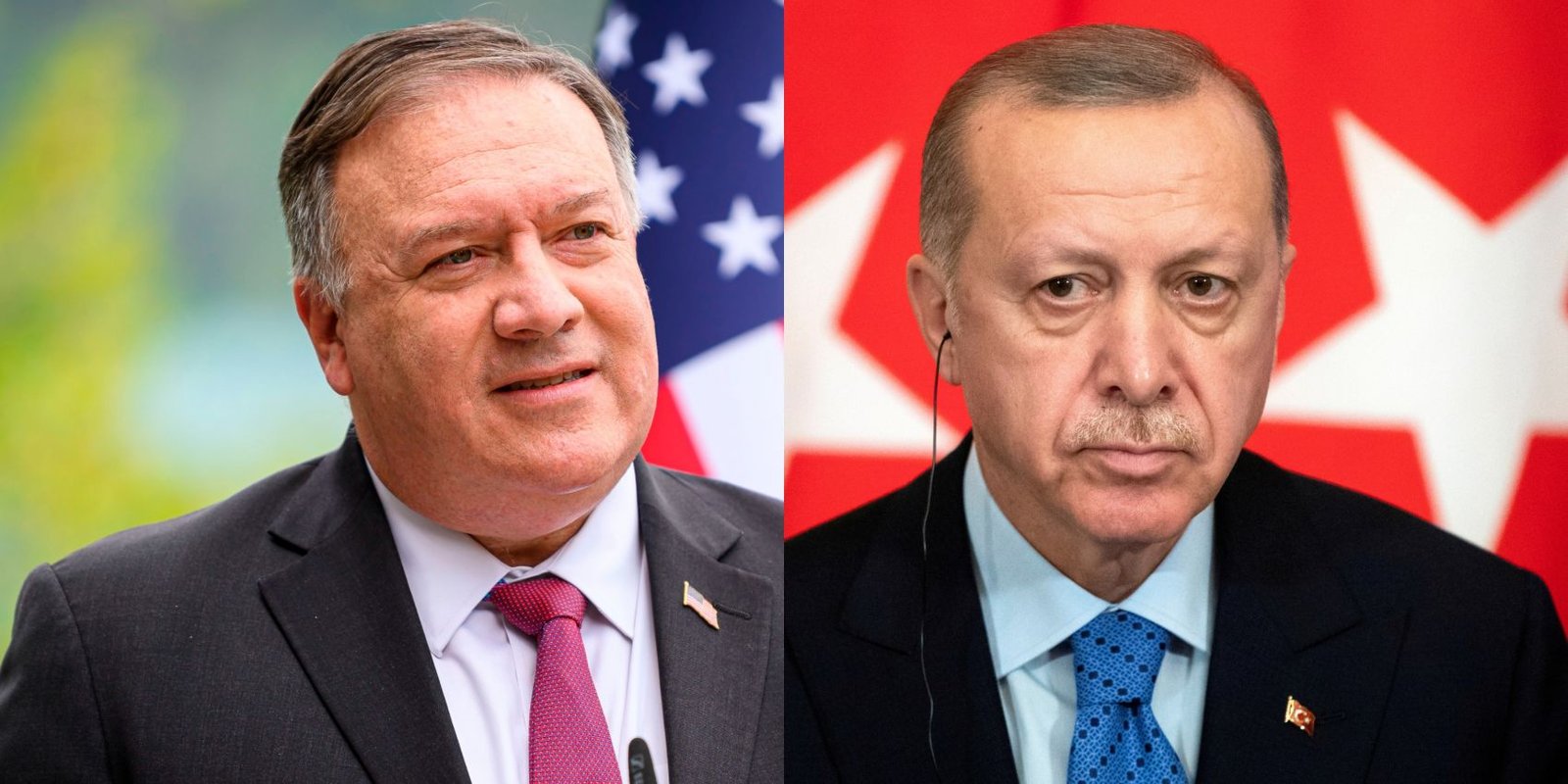 US Secretary of State Mike Pompeo is set to visit Turkey next week but he won’t meet with President Recep Tayyip Erdogan or other government leaders when he visits Turkey. Instead he will meet with key leaders of Turkey’s tiny Christian minority as President Recep Tayyip Erdogan focuses on overtures to his Islamist base after committing war crimes in Christian majority Artsakh Region by brining in Islamist Radical Terrorists to fight along side Azerbaijan forces, a significant currency crisis and his government’s struggle to contain the Covid-19 pandemic.

US Secretary of State Mike Pompeo not meeting Erdogan and other government officials on Turkey trip is considered as an insult by Turkey.

US officials briefing reporters Friday on Pompeo’s 10-day, seven-nation trip said he wants to concentrate on issues of religious liberty. He plans to meet in Istanbul with religious figures including Ecumenical Patriarch Bartholowew I, the Greek Orthodox Christian leader, but isn’t traveling to the capital, Ankara.

US Secretary of State Mike Pompeo is on visit to Turkey as part of his Europe/Mideast tour next week reaffirms support for Christian/religious minorities. “Secretary Pompeo is going to use these opportunities to discuss religious issue and, as you know, promoting the unalienable human right of religious freedom and fighting religious persecution is a key priority for the administration and for Secretary Pompeo,” a senior State Department official told reporters during a telephone briefing on Friday.

Mr Pompeo will also tour the Rustem Pasha mosque. Notably, the Istanbul visit comes after Mr Erdogan ordered the conversion of the Hagia Sophia museum, a former Byzantine church, back into a mosque in July – drawing a sharp rebuke from Mr Pompeo. Mr Erdogan’s government also issued a decree in August to transform the Chora Museum, a former Christian monastery, back into a mosque.

Last summer Erdogan ignored appeals by Orthodox church leaders and the Trump administration, and reverted Istanbul’s Hagia Sophia into a mosque, reversing a 1934 decree that the famed building should operate as a museum. Built in the sixth century, the church was the seat of eastern Christianity for some 900 years before the Ottomans seized and converted it into a mosque in 15th century.

Related Article Turkish Hypocrisy: Do To Hagia Sophia, What They Complain To The World

Erdogan later also announced a decision to transform another Byzantine shrine-turned-museum in Istanbul, the Chora Church, into a mosque.

“The rhetoric accompanying these two decisions was extremely concerning, meaning it was a message of reconquest that introduced a kind of Ottoman-era hierarchy between ruling Muslim Turks and religious minorities,” said Aykan Erdemir, senior director of the Turkey program at the Foundation for Defence of Democracies and a former Turkish parliamentarian.

Related Article Arab World is distancing itself from its Ottoman Past

“One could also see Pompeo’s visit – or meeting with the ecumenical patriarch – as a message of solidarity as well as a message of concern about Turkey’s worrying trajectory.”

Responding to a State Department statement saying Pompeo planned to discuss religious issues in Turkey when meeting with Patriarch Bartholomew I in Istanbul, foreign ministry spokesman Hami Aksoy advised the U.S. government to focus instead on “racism, Islamophobia and hate crimes” at home.

“It would be more suitable for the U.S. to first look in the mirror and show the requisite sensitivity towards human rights violations in the country such as racism, Islamophobia and hate crimes,” he said in a statement.

President Recep Tayyip Erdogan’s government has a poor religious freedom record, according to the State Department and other monitors. The U.S. Commission on International Religious Freedom (USCIRF), an independent statutory watchdog, has long recommended that the State Department place Turkey on a special watch list for religious freedom violations.

Although Mr Pompeo’s visit to Turkey is part of a broader tour of Europe and the Middle East, it is the one country where he will not meet with any government officials. While the State Department official said that senior Turkish officials “have their own travel schedule” and noted that Mr Pompeo has “a very tight schedule in Istanbul,” Mr Erdemir attributed the lack of government-to-government meetings to the diplomatic impasse between the two allies over a myriad of issues.

Erdogan, who has often clashed over policy with the US but had maintained friendly relations with President Donald Trump, has joined other world leaders in congratulating President-elect Joe Biden on an election victory that Trump has refused to recognize.

But a Turkish official, who asked not to be identified discussing diplomatic matters, told a different story: that Pompeo declined an invitation by Turkey’s Foreign Minister Mevlut Cavusoglu to come to Ankara during his visit to Turkey and instead asked Cavusoglu to come to Istanbul to meet him.

Cavusoglu refused, the official said, offended that Pompeo is giving a cold shoulder to Ankara before leaving office, according to a senior Turkish official, speaking on condition of anonymity to share the sensitive information.

“Pompeo does not necessarily have an interest in listening to the same offer again,” said Mr Erdemir. “And in the eastern Mediterranean, Turkey continues seismic exploration and drilling in contested maritime waters, so there doesn’t seem to be anything new on the Turkish front.”

And while the Donald Trump administration has so far refused to implement legally mandated congressional sanctions on Turkey over its S-400 purchase from Russia, a State Department spokesperson told The National that “Turkey remains at risk of sanctions” over the missile system.

Pompeo’s trip will take him to seven countries: France, Turkey, Georgia, Israel, the United Arab Emirates, Qatar and Saudi Arabia. It comes at an awkward moment given that many of the leaders he will meet also have congratulated Biden for a victory that Trump — and Pompeo — have refused to recognize.

Pompeo is planning to meet senior leaders on all his other stops. He’s also planning a precedent-shattering event: During his two-night stay in Israel, Pompeo will visit the Golan Heights and Israeli settlements in the West Bank, something previous top officials have shied away from for fear of antagonizing the Palestinians. The settlement visit is likely to be well-received by the evangelical Republican base – a key demographic Mr Pompeo relied to propel his political career forward as a US lawmaker before he entered the Trump administration.

His trip will also include visits to the United Arab Emirates, Qatar and Saudi Arabia.

In the UAE, Mr Pompeo will meet with Sheikh Mohamed bin Zayed Al Nahyan, Crown Prince of Abu Dhabi and Deputy Supreme Commander of the UAE Armed Forces. They will discuss the Abraham Accords, which normalised UAE-Israeli relations, as well as the Trump administration’s proposed $23 billion sale of F-35 aircraft, drones and air-to-ground munitions.

“Only through increased cooperation with all six GCC countries and the US can we thoroughly counter the malign influence of the Iranian regime across the region,” a senior State Department official said. “The United States wants to see the parties involved resolve the dispute, to begin lifting all restrictions on air space and land borders as soon as possible.”

Why are no sanctions yet placed on Turkey for War crimes in Armenia? Why no action is taken against Turkey for bringing in Islamist Radical Terrorists to help fight along Azerbaijan against Armenia?

Why no action is taken against Turkey for pushing millions of Islamist Radicals into Europe as refugees?

Why no action is taken against Turkey for threatening Cyprus?

Why Turkey is still in NATO after buying Russian S-400 Missile Defence System?