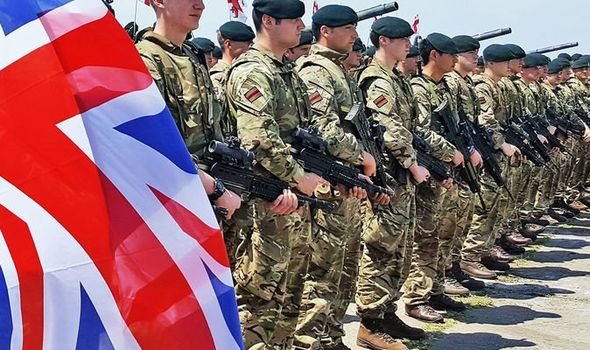 UK has announced the largest investment in its military since the end of the Cold War, despite the coronavirus crisis pummelling the economy, as the government seeks to define its post-Brexit role on the world stage.

Prime Minister Boris Johnson wants to carve out a role for Britain as a swashbuckling leader of a new era of global cooperation and free trade, backed by cutting-edge modern military and cyber capabilities.

In a speech to parliament on Thursday outlining the first conclusions from the biggest review of foreign policy and defence in three decades, Johnson will announce an extra 16.5 billion pounds ($22 billion) for the military over the next four years. The defence budget is currently just under 42 billion pounds a year.

“I have taken this decision in the teeth of the pandemic because the defence of the realm must come first,” Johnson said in a statement.

“The international situation is more perilous and more intensely competitive than at any time since the Cold War and Britain must be true to our history and stand alongside our allies. To achieve this, we need to upgrade our capabilities across the board.”

At a time of heightened global uncertainty, the continued rise of China and after four years of U.S. President Donald Trump’s international diplomacy, Britain’s 2016 vote to leave the European Union has thrown its own role and global influence into doubt.

With an eye on China, US has already decided to deploy a new numbered Naval Fleet in Indian Ocean. Also the Queen Elizabeth Carrier Strike Group of UK Royal Navy is scheduled to undertake its maiden operational deployment in the Indian Ocean Region in 2021. If the Growing military aggression and threats of China are to be stopped, It is essential that all the allies prepare themselves for a Cold War II.

Speaking in Washington on 7-Aug 2018, Gavin Williamson, the U.K. defense minister, warned that not enough is being done to plan for long-term efforts by Western nations to counter the potential threats from Russia and China.

“The debates about grand strategy among NATO partners, among the West, among our friends and allies, there’s not enough talk about it,” Williamson said during a visit to the Atlantic Council. “You want to be having that conversation because if we do not have that conversation, if we do not start planning for it, we will be ill-prepared for it.”

The theme of great power competition is impossible to shake in the D.C. region, particularly since the Trump administration rolled out its National Defense Strategy, which declared China and Russia as the two standards by which the United States must judge its success.

Williamson specifically compared the situation among Western powers to that of China, noting “they do have that grand strategy, they have that plan for the future. And we have to deliver that as well.”

With the Bio-Terrorist China killing over 1.34 Million people worldwide using its bio-weapon Chinese Coronavirus and instead of helping the world to fight this pandemic, China is busy exploiting the world using its cheap product sales, hostile takeover of strategic companies in the West, using its Debt Trap diplomacy to gain more power at United Nations, threatening its neighbours like India, Taiwan with a military invasion. This Chinese Imperialism has brought rest of the world together and prepare for a credible defence against Chinese aggression.

The government said the increased military spending will cement the United Kingdom’s position as the largest defence spender in Europe, the second largest in NATO, and allow increased investment in areas such as cyber and space.

The extra money will be used to modernize the armed forces with more spent on robots, autonomous systems. The money will fund space and cyber defence projects such as an artificial intelligence agency, and could create 40,000 new jobs, the government said.

The projects are expected to create up to 10,000 jobs annually across the UK, for the next four years, the government said.

Defence Secretary Ben Wallace said the jobs and business opportunities being created by the investment would bring “prosperity to every corner of the UK”, helping the country to “build back” from the coronavirus pandemic.

The Ministry of Defence’s annual budget is around £40bn, so the £16.5bn over four years is about a 10% increase.

The extra spending is on top of the Conservatives’ 2019 manifesto commitment. As per sources, cuts will be made to Economic Aid to certain countries like Pakistan that are allying with China.

Then, the government pledged to increase defence spending by 0.5% above the inflation rate, which is currently at 0.7% , for every year of the current Parliament.

So based on forecasts of inflation, the government said it expects the Ministry of Defence (MoD) to get a total overall increase of about £24.1bn over four years, compared with last year’s budget.

The prime minister will announce a new agency dedicated to artificial intelligence, the creation of a National Cyber Force and a new “Space Command”, capable of launching Britain’s first rocket in 2022.

The full conclusions of the defence and security review – a study of threats and capabilities – will be announced next year.

Shouldn’t the Allied nations of US, UK, France, Germany and other European Nations end economic trade and pull out all investments from China? The more the west continues to buy from China or invests in China, the more West is enabling China to prepare itself to grow bigger.

If the Cold War II is a reality, then all nations should first economically boycott China and bring back all the jobs from China to their respective countries or move those jobs to their allies.

6 Pakistani men were sentenced for the murder of English 20-year-old, Bradley Gledhill on the streets of Batley in West Yorkshire, UK