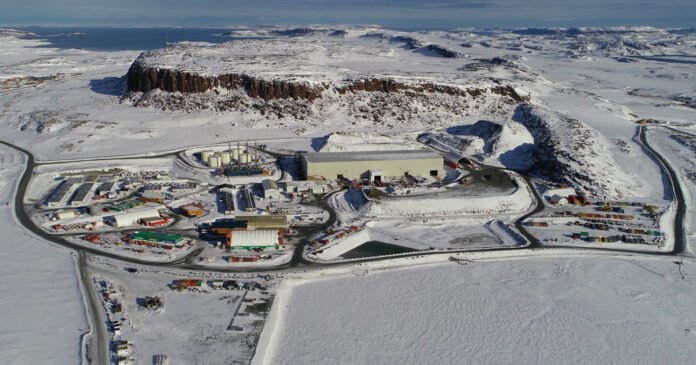 Justin Trudeau govt has come under heavy criticism for selling Canadian Gold Mines to China. Shandong Gold Mining Co. Ltd. announced a deal in May to buy TMAC, owner of the Hope Bay mining project in Nunavut, for $149 million.

The friendly deal has received Chinese regulatory approvals and TMAC shareholders voted in favour of it in June.

The cabinet national security review, under the Investment Canada Act, raises concerns that the deal may not be able to close by a Feb. 8, 2021, deadline to complete the sale.

After public criticism, Federal cabinet ordered a national security review of the proposed sale of the Canadian gold miner to a Chinese company.

Among the online comments from Nunavummiut and others regarding a potential Shandong Gold Mining takeover of TMAC Resources are recurring concerns that environmental damage could occur and that because the company is Chinese, it may pull up stakes without following through on clean-up efforts.

Some critics also discourage doing business with China, and its state-owned companies, because that country is holding two Canadians – Michael Spavor and Michael Kovrig – as political prisoners. In addition, there are many who denounce China for its human rights record with its own citizens, including the holding of more than one million Uighurs, of Muslim faith, in detention centres.

Although TMAC has struggled to achieve profitability, it has built considerable infrastructure including a port and an airstrip, as well as a processing plant. Its strategic infrastructure has drawn attention to — and criticism of — China’s growing presence in the Canadian Arctic.

“If you look at it from a security and military point of view, the concerns would be they have physical assets on the ground in the Arctic,” said Pierre Leblanc, a private consultant with military experience in the Arctic, who advises mining corporations.

The mine’s infrastructure could allow China to service ships using Arctic waters, the port could be used to bring large equipment into North America, and serve as a spot to covertly monitor conversations or Canada’s early warning radar system that is based in the Arctic, Leblanc said. Still, the government could monitor the site and these concerns need to be weighed against the economic benefits of an operating mine including the jobs and tax income it provides, he said.

A former top military official has joined a growing number of voices that are calling on the federal government to reject a bid by a Chinese state-owned company to acquire a gold mine in the Canadian arctic.

According to the Globe and Mail, retired major-general and former Afghanistan mission commander David Fraser urged the government to turn down the offer and to keep China out of the north.

Currently, the project is undergoing a national security review by the federal government under the Investment Canada Act. Last week, TMAC released a statement announcing that the review period would be further extended for an additional 45 days.

“This thing has a port attached to it. [China has] written a paper saying they want to be a near-Arctic power. Well, this gives them actual Arctic access,” Fraser told the Globe and Mail.

“If you look at what they have done on the South China Sea to extend their area of influence – what’s to stop them, once they get squatter’s rights and get into this port, of doing the same thing up there?”

Fraser is not alone in his opposition to the deal. Shortly after the purchase was announced earlier this year, former CSIS director Richard Fadden called on the federal government to consider the national security implications of such a deal.

If approved, the $149 million mine could give a foothold to China in the arctic, Fraser warned.

“[The Shandong] company reports back to the party in some shape or form and then all of a sudden they have certain people on their staff … that would be looking at things other than mines. Who is to say they couldn’t start snooping on us given [the various] strategic installations that we have across the North?”

“The Arctic is an economic window and we must put our stake in the ground and take ownership of it to assert our sovereignty in order that we can push back on the Russians and Chinese and everyone else that starts using the area.”

It’s not the first time questions have been raised about China’s presence in the Canadian Arctic. Chinese companies have already invested in zinc and copper deposits in the region as well as another junior gold mine developer, relatively close to TMAC’s mine.

As per locals, Justin Trudeau goverment is not worried about Canada and they would sell off all the strategic assets to the China. Justin Government has a lot of people are under the influence of Pakistan Intelligence Agency ISI which is pulling their strings. These people can go any way to oblige Pakistan and its master China on a promise to create trouble in India.

Canada has not learnt any leasons from African and Asian countries suffering due to Chinese Debt Trap Diplomacy. Case of Ghana is a good case study. How China has destroyed forests, farms for gold mining and how the drinking water is rendered undrinkable.

Another classic example of Chinese Debt Trap Diplomacy is Pakistan.

There were protests recently by the environmentalists against the Gas Pipline that could have cut the costs. However the same environmentalits are silent now.

On one hand United States has vowed to bring Bio-Terrorist China to Justice for killing over 1.49 Million people worldwide using the Chinese Corona Virus and on the other hand its neighbor Canada is selling strategic assets to the same Bio-Terrorist.

Will Justin Trudeau sell of strategic assets to China?