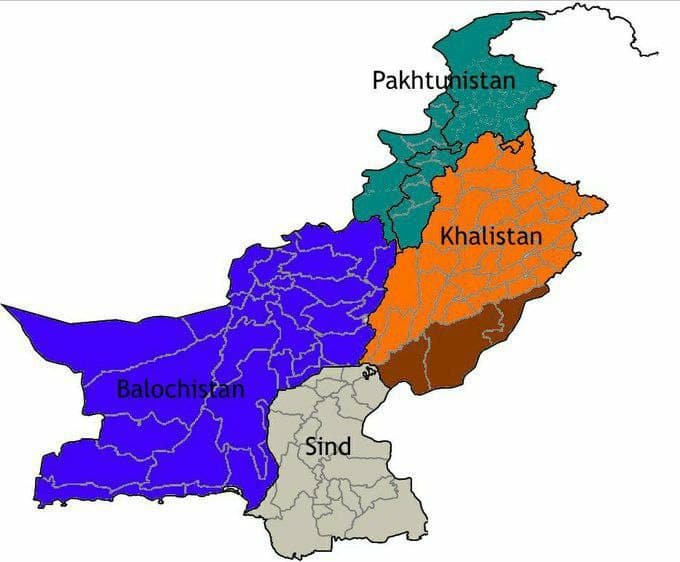 “Pakistan Banega Khalistan (Pakistan will become Khalistan), Lahore Capital Of Khalistan” is the new slogan among Indian Sikhs and Punjabis to fight the Pakistani Propaganda of Khalistan. Some Individuals from Sikh community in America, Britain and Canada and mostly the Pakistani trolls with Fake Sikh handles at the behest of Pakistan Intelligence Agency ISI, have become active again calling for a Khalistan (a Sikh majority state). In the past, people wanting Khalistan in Punjab, have actually claimed that Pakistan’s major city of Lahore should be its capital considering that there are many Sikh shrines in Pakistan.

The hashtags used widely all over social media are #PakistanBanegaKhalistan and #LahoreCapitalOfKhalistan.

If you look at the Pakistani Propaganda of Khalistan that includes Indian Capital Delhi and state of Haryana and Himachal Pradesh, Sikh Intellectuals in India reject Pakistan’s propaganda as utter nonsence as New Delhi, Haryana, Himachal Pradesh had nothing to do with the Sikh History. As per the Sikh Intellectuals, the major portion of Sikh History revolves around the areas of Punjab Occupied by Pakistan.

Major Rajpreet Singh Aulakh with his twitter handle @rajpreetaulakh tweeted an eye opener truth that will hurt Pakistan, moles of ISI and Fake Sikhs big time, “For those who want to know how many Sikhs support Khalistan. In 2017 election total 1.57 crore Punjabis voted. 91 lakh of these were Sikhs. Flag bearer of Khalistan Simranjit Singh Mann’s party got only 49000 votes in total. So only 0.53% Sikhs supported the idea of Khalistan. Yes , that is less then < 1% . Please don’t be mislead by anonymous and fake accounts propaganda on Social Media . They are created to create rift between Sikhs & Hindus . Let’s stay together and defeat them together.”

Many Gurudwaras of Pakistan have been illegally occupied by Islamist Radicals and are using them as their residence. Thousands of acres of Land belonging to different Gurudwaras of Pakistan are illegally occupied by Islamist Radicals who do not let Sikh Devotees go near the historic Sikh sites. Many of the historic gurudwaras are in dilapidated state that local Islamist Radicals have even stolen the bricks from the Gurudwaraswalls to construct their own houses. In most of the Historical Gurudwaras, the holy scripture of Sikhs “Guru Granth Sahib” is not allowed to be kept. Sikh devotees are not allowed to do Karsewa or serve Langar (free food service). The Land of Punjab in Pakistan where Sikh Gurus were born and spent most of their time are occupied by the descendants of the same radical Islamists who killed the Sikh Gurus for their refusal to convert to Islam.

We covered about destruction of Gurudwaras in Pakistan in details in our previous article Gurudwaras of Pakistan: Systematic Destruction by Islamist Radical Pakistan

Now it is becoming patently obvious that Pakistan’s intelligence service is promoting Khalistan along with its Kashmir agenda. It is strange that in doing so they are forgetting history. Most of the bloodshed in 1947 at the time of Partition in Punjab was between Sikhs and Muslims. But now they are letting paid Khalistan supporters, who are ostensibly not of Muslim faith, shouting Allah o Akbar.

Violence was also perpetrated on an organized basis, with Pathans taking Hindu and Sikh women from refugee trains. The Pathans abducted a large number of non-Muslim women from Kashmir also and sold them in West Punjab and these sold women often ended up as ‘slave girls’ in factories.

Numerous Hindu and Sikh villages were wiped out. Huge numbers of Hindus and Sikhs were killed, forcibly converted, children were kidnapped and women were abducted and raped publicly. The official figure of death in Rawalpindi stood at 2,263. Before further attacks many Sikh women committed suicide by jumping in water wells to save honor and avoid conversion. We covered this in details in our previous article Mass Suicide by Sikh Women of Rawalpindi in 1947 : A Forgotten Horrific Episode.

If the Khalistan Propaganda is to reclaim the lands belonging to Sikhs, then this Pakistan Propaganda will be shortlived and it is not far that a demand is made by Millions of Sikhs in India, UK, Canada and other countries to seperate Punjab, KP and FATA from Pakistan’s occupation and make it Khalistan.

If you look at the history and look at the map of Punjab kingdom ruled by the great Sikh King Maharaja Ranjit Singh, It covered entire punjab region and far beyound in FATA and KP except Chitral that is currently occupied by Pakistan and the day is not far when the same guns turn against Pakistan Government.

This map shows our historic conquest in Pakistan. But, we want to be realistic enough. Not all Territories can be reclaimed, especially if they are inhabited by suffering people like the Pashtun or Baloch. Our demand is to take control of Pakistani Punjab and if Pakistan doesn’t surrender of voluntarily, we will fight for it. Here is the new Map made by Sikhs in India that demand “Pakistan Banega Khalistan with Lahore Capital of Khalistan” that is more realistic and accommodates all ethnic nations including Baloch, Pashtuns, Sindhis and Mohajirs. The result of this new division of current Terroristan Pakistan will be that Pakistan will be reduced to the tiny brown portion shown in the below map.

Prominent Sikh and Punjabi people have started talking about “demanding lands belonging to Sikhs that are occupied by Pakistani Islamist Radicals to be freed and given to Sikhs. They are now demanding “Pakistan Banega Khalistan with Lahore Capital of Khalistan”.

Sikhs we talked with said, for them whole of India is their country and they can freely move anywhere in India and carry out any business, buy property and practice their religious activities anywhere in India. On the Contrary, the Sikhs are not even allowed to perform the last rites of cremation anywhere in Pakistan. They are forced to bury their dead ones. Sikh Girls are regularly abducted and converted to Islam and forcefully married to Islamist Radicals. When the Family of Jathedar of Nankana Sahib itself is not safe, how can Pakistan claim to be a well wisher of Sikhs?

When a question was asked, What would happen to millions of Islamist Radicals living in this region? Our Sikh contact in India gave us the answer in the form of a question. Did the Muslims disappear from Indian Punjab, how much ever radicalized and abhorrent they were? Why do you expect us to do what they did to us? We are not like them. People will have to scale down on their ambitions for an amicable settlement. Pashtuns want Quetta, Baloch want Karachi and Sikhs want Peshawar and Bannu aling with Lahore and Rawalpindi. The Sikhs should tone down their demands and be accommodative to the others who are equally suffering under the Pakistani yoke. In fact, Sikhs will have to share territory with Ahmedis and Sairakis, Sindhis will have to live with Baloch and the tribals of FATA with the Pashtuns of the plains. Hence we made this map that accommodates all the Ethnic nations.

Sikh and Punjabi people, our team talked to further said, if Sikhs in Canada, England and other countries can help get the thousands of acres of land of our Gurus in Pakistan occupied punjab, we can make a country separate for Sikhs as Israel Made for Jews.

They further asked the following questions that need to be asked to Pakistanis that are instigating and brainwashing Sikh youngsters in Canada, UK an other countries:-

More importantly, the Sikh for Justice organization which ostensibly talks about Khalistan, has directly written a letter (taken from a tweet by @setholdmixon) and acknowledged it. Whole world understands that those standing with China and Pakistan and their ulterior motives.

The letter will probably end up being investigated by law enforcement agencies in America, which is preparing to start looking upon China as its peer competitor.

Moreover, the Pakistani state propaganda outlets on social media are celebrating this as evidence of China being ready to support Pakistan and Khalistanis in dismembering India, a fellow United Nations member with which China has annual trade of over $80 billion.

At some point, the elders of Khalistan demanded Khalistan with Lahore as capital city. Zia ul Haq, seeing the snake turning its head on the master, unceremoniously clamped the Khalistani issue post which there are rumouts that Khalistanis were a part of the murder conspiracy which killed Zia ul Haq and a Majority of his government.

This kind of adventurism can get Pakistani into a lot of trouble. Pakistan is still trying to recover from sanctions and global condemnation resulting from support of terrorism in Afghanistan and Kashmir. Is it in Pakistan’s interests to attract new sanctions from groups like the Financial Action Task Force (FATF) over unlawful activities by Khalistanis?

Please let Pakistan focus on its own economic development and ending its internal crises. Irresponsible and fanatical Khalistan advocates like the man who has written a letter to the Chinese President so openly, will only bring new problems and trouble for Pakistan. The Demand for “Pakistan Banega Khalistan, Lahore Capital of Khalistan” will only grow and will reach one day beyond the control of Pakistan and Pakistan will end up losing not only Balochistan, Sindhudesh, but also Punjabi Lands belonging to Sikh Gurus and Maharaja Ranjit Singh Empire.

If Pakistan loves Khalistan that much, whats stopping Pakistan from surrendering Lahore and Gujranwala to Khalistan and allow them to set up their own country?

Why aren’t these Khalistanis led by PGPC Chief Gopal Chawla and others refusing to question Pakistan over its commitment towards Khalistan?

What is Pakistan’s stand over the occupied Sikh religious structures and thousands of acres of lands that belong to Sikh Gurudwaras and in the name of Sikh Gurus?

Isn’t it the duty of elders in Sikh community whichever country they may be in, to teach the young generates the sacrifice of Sikh Gurus that spent fighting the foreign Islamist Radical invaders and the sacrifice made by millions of Hindus and Sikhs during the partition of India and Pakistan in 1947?