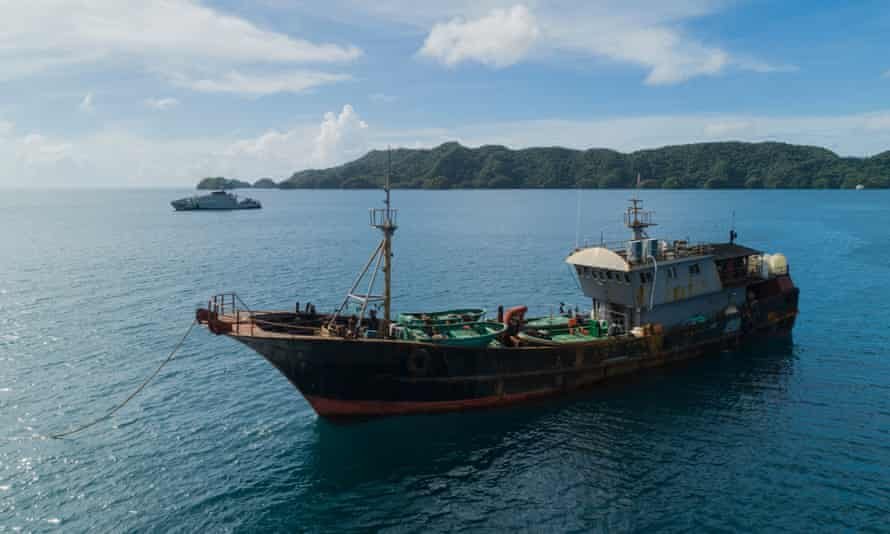 Chinese illegal fishing loot is now touching new highs. This time a Chinese fishing vessel and its 28 crew have been detained in Palau, authorities said, creating a delicate diplomatic situation for the tiny Pacific nation, which is allied with Beijing’s rival Taiwan.

The boat, alleged to have been illegally harvesting sea cucumber, was intercepted by a patrol boat at Helen Reef, in Palau’s territorial waters, and escorted to the main island of Koror.

“They did have sea cucumber on there … it’s estimated about 500 pounds (225kg),” said Victor Remengesau, director of Palau’s division of marine law and enforcement.

Sea cucumber – known on international markets as beche-de-mer – is a lucrative harvest for fishing crews across the Pacific. A Samoan court heard this year the animals fetch up to US$800 a kilogram in Asian markets, citing a Pacific Community report.

Chinese fishing fleets have been venturing further, and for longer, into the Pacific in search of new fishing grounds in recent months and years. But this is the first time a Chinese crew has been intercepted and detained in Palau’s territorial waters.

The intercepted fishing vessel, and six smaller boats, have all been detained by Palau.

Remengesau said the Chinese fishermen and 19 crew from the patrol boat that caught them were undergoing 14 days quarantine in Palau, one of the few places in the world that remains free of Covid-19.

Remengesau, the brother of Palau’s president, Tommy Remengesau Jr, said it had not yet been decided whether to charge the fishermen, who are believed to be from southern China’s Hainan province.

“That’s one of the things that we’re discussing,” he said. “We don’t want them any longer than necessary in Palau.”

Remengesau said Palau had to balance its concerns over the crew bringing Covid into the archipelago, while defending the country’s territorial waters from incursion.

“It’s unlawful entry. We may care about Covid and the spread of Covid, but we can’t just let people do whatever they want, and disguise [alleged illegal activity].”

China has not yet made a formal response to the detention of its nationals.

Palau, long regarded as a pioneer in marine conservation, has banned foreign commercial fishing vessels from its waters.

But there is increasing pressure on Pacific states to closely monitor their territorial waters from incursions, as fishing fleets, of which China’s is the largest, venture further and further from home ports seeking new fields.

A report from the London-based Overseas Development Institute this year said: “Having depleted fish stocks in domestic waters and encouraged by subsidies, China’s distant-water fishing fleets have been travelling farther and farther afield, and its companies have been building more and more vessels to meet the rising demand for seafood.”

In August, just off the Galapagos Islands, an armada of nearly 300 Chinese vessels logged 73,000 hours of fishing in a month, hauling in thousands of tonnes of squid and fish.

Remengesau said a similar foreign fishing boat to the one intercepted was reported in Palauan waters in September, but by the time rangers’ patrol boats arrived, the fishing vessel had left.

The fishing vessel was intercepted by an Australian-supplied Guardian-class patrol boat, only delivered to Palau in September.

Palau’s marine sanctuary backfires, leading to increased consumption of reef fish
Read more
Palau, an archipelago nation of about 500 islands and 18,000 people, is one of Taiwan’s four remaining allies in the Pacific and only 15 worldwide.

China, which sees Taiwan as part of its territory, has shown its displeasure at Palau’s diplomatic links in the past, implementing an unofficial tourism boycott in 2018.

Palau is also tightly allied to America, one of the Pacific states that has signed a compact of free association with the US. The president has asked the US military to build a base on Palauan territory.

China continues to exploit the loop holes in the Internatonal Law and continues to fish in the waters near to other countries. The International Law says all the Sea water beyond 200 Nautical miles of the coast of any country is International waters. Chinese have mostly exploited that loop hole. Chinese vessels have gone to fishing as far as South American and African Waters and there is no stopping. While the other contries live with depleted fishing stocks, China continues to loot the fish resources all over the world.

The Irony is that, China does not want anyone else to venture into the South China Sea for either Fishing or for exploring natural resources.

In September 2020, The western Pacific nation of Palau had urged the United States military to build bases on its territory – in the heart of a region where Washington is pushing back against growing Chinese influence.

US defense secretary Mark Esper visited the island nation end of August 2020 as part of a Pacific tour, accusing Beijing of a “malign influence” and “ongoing destabilising activities” across the region.

Palau’s president Tommy Remengesau Jr later revealed he had told Esper the US military was welcome to build facilities in his country, an archipelago about 1500km east of the Philippines.

Addressed to Esper and marked “by hand delivery, Koror, Palau,” the letter said the nation of 2o,000 was eager to host land bases, port facilities and airfields for the US military.

Remengesau also suggested a US Coast Guard presence would help Palau patrol its vast marine reserve, which covers an area of ocean the size of Spain and is difficult for the tiny nation to monitor.

Palau is an independent nation, but it has no military and the US is responsible for its defence under a compact of free association signed with Washington upon independence in 1994.

While Palau has sought to welcome Chinese tourists, and Chinese investment – particularly noticeable in hotels in the capital Koror – the Pacific nation has consistently resisted Chinese political influence in the archipelago.

Palau is one of just four remaining Pacific nations that recognise Taiwan.

China has been interfering not only politically in the tiny nation, but now has started intimidating and threatening by looting the fish resources in the territorial waters of the tiny Pacific nation as well.

What Right has China to go fishing in the sea near Argentina or West Africa or Indian Ocean? Is it not the flaw in International Laws that permit rogue countries like China to bring poverty and misery to other Billion people whose lives depend on fishing and ancillary industries? Shouldn’t such International Laws be struck down and either new laws be made or such conflicts can spiral into future wars.

When China does not allow other countries to venture into South China Sea either for fishing or for exploring natural resources, what rights China has got to enjoy Chinese Illegal Fishing Loot from waters belonging to other nations.

Does that mean the International Laws are put to use only to the convenience of the Chinese to allow them to continuously enjoy the Chinese Illegal Fishing Loot and use such laws to prevent others from doing the same?

What Rights China has got to carry out illegal fishing in Waters of Africa, South America or even Asia?