Pakistan Opposes Sanctions Against Turkey: The Alliance of State Sponsors of Terror 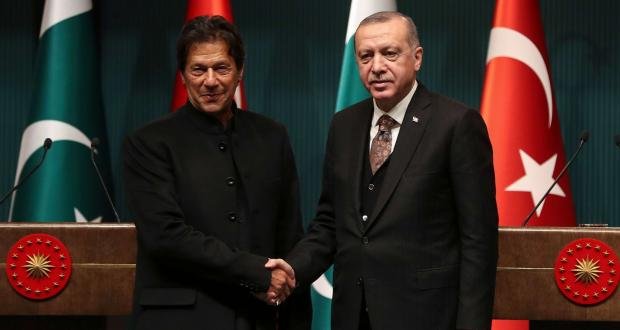 In a latest development Pakistan Opposes Sanctions Against Turkey. Pakistan on Wednesday voiced opposition to the US’ recent sanctions against Turkey for buying Russian S-400 Air Missile Defence System being a NATO member and part of F-35 program, forging a stronger alliance between State sponsors of Terror.

The United States made clear to Turkey at the highest levels and on numerous occasions that its purchase of the S-400 system would endanger the security of U.S. military technology and personnel and provide substantial funds to Russia’s defense sector, as well as Russian access to the Turkish armed forces and defense industry. Turkey nevertheless decided to move ahead with the procurement and testing of the S-400, despite the availability of alternative, NATO-interoperable systems to meet its defense requirements. This decision resulted in Turkey’s suspension and pending removal from the global F-35 Joint Strike Fighter partnership.

“Pakistan is deeply concerned on the imposition of sanctions on Turkey by the United States,” said a statement from the Foreign Ministry of the Terrorist Producing Country Pakistan, adding that Islamabad remains opposed to the use of “unilateral coercive” measures against any country in principle.

Partnership between Turkey and Pakistan goes a long way. Turkey had hired Terrorists earlier from Syria, Libya and Pakistan and arranged them to be sent to Azerbaijan to fight in Nagorno-Karabakh (Artsakh) against the Armenian Army.

An Azeri soldier recently on a national TV program, lets slip info about Pakistani terrorists fighting in Karabakh exposing that Pakistan sent Terrorists from Peshawar to Azerbaijan to fight against Armenia during the war in Nagorno Karabakh (Artsakh).

This partnership between Turkey and Pakistan is not only between the Suppliers and Producers of Terrorists in the world, but also the alliance between the Genocide Maniacs of the world. Turkey has committed 2 major Genocides of Armenians in the past while Pakistan has committed Genocide in Indian union territory of Jammu and Kashmir.

In order to strengthen this Global alliance between the State sponsors of terrorism, Turkey started recruiting Syrian terrorists recently by paying them $2000 each to be sent to Pakistan to fight against Indian Forces in Indian Union Territory of Kashmir.

We had provided numerous evidences of Terrorist producing country Pakistan sending Terrorists, supplying them arms and ammunition to fight against Indian Armed forces besides killing innocent civilians including women and Children.

Perpeterators of 26/11 Terrorist Attack still roam freely in Pakistan while the FATF continues to do the empty lip service.

Even the International community has come forward and recognized the terrorism being produced an exported to its neighbors by Pakistan.

Pakistan is responsible for all the violence and terrorism in India and in Afghanistan. If it was not for Pakistan, Indian union territory of Kashmir would have been a peaceful and prosperous place.

Urging dialogue, the ministry of the Terrorist producing country Pakistan said it “acknowledges and appreciates” Turkey’s invaluable role towards regional and international peace and stability.

“The people and the government of Pakistan reiterate their strong support for the government and the people of Turkey in their quest for national security, peace and prosperity, and as always, will continue to stand by them towards the achievement of these shared goals,” the statement concluded.

The US on Monday imposed sanctions on Turkey over its purchase of the Russian S-400 missile defense system.

The sanctions, coming under the Countering America’s Adversaries Through Sanctions Act (CAATSA), target Turkey’s Defense Industries Presidency (SSB), including Ismail Demir, the head of the SSB, and three other officials.

In April 2017, when its protracted efforts to buy an air defense system from the US proved fruitless, Turkey signed a contract with Russia to acquire the S-400 shield.

US officials have voiced opposition to their deployment, claiming they would be incompatible with NATO systems and would expose F-35 jets to possible Russian subterfuge.

However by imposing sanctions on Turkey, US administration has also indirectly hurt the war preparation efforts of Pakistan.

As soon as the US administration took over, Pakistan was denied all kind of weapon exports and the aid was curtailed to the lowest levels.

Turkish companies are said to be working to supply patrol craft and a fleet tanker for the Pakistan navy and upgrade the South Asian nation’s French-designed submarines.

Ankara also sealed a deal in 2018 to sell a batch of 30 T-129 attack helicopters to Pakistan, but there has been little progress to execute it because the U.S. has not granted export licenses to Turkey.

Later that year, a Turkish shipbuilder announced it had signed a contract to supply four MILGEM stealth corvettes, which are small multi-role warships, to the Pakistani navy.

Construction of the MILGEM warships has already started and Pakistani officials were expecting to get the first ship by the end of 2021.

“The contract entails construction of two corvettes at Turkey while two at Karachi Shipyard & Engineering Works,” the Pakistan navy said in a recent statement.

The MILGEM and the T-129 helicopter both use U.S. components.

Will the International Community take steps to end the Nuclear war program of Pakistan that is very likely to be exported to Turkey and other rouge nations in the world?

Pakistan is already on the verge of collapse with Sindhudesh, Balochistan, Pashtunistan ready to break away from Punjabi Pakistan. There is going to be chaos in Paksitan. There is very likelihood of some of the nuclear materials falling into the hands of Terrorists or Pakistan may in desperate attempts to get foreign exchange may export it to Turkey and other countries. Is the International Community ready to seize all the nuclear warheads and nuclear material in possession of Pakistan and destroy all the nuclear plants producing material for nuclear warheads?