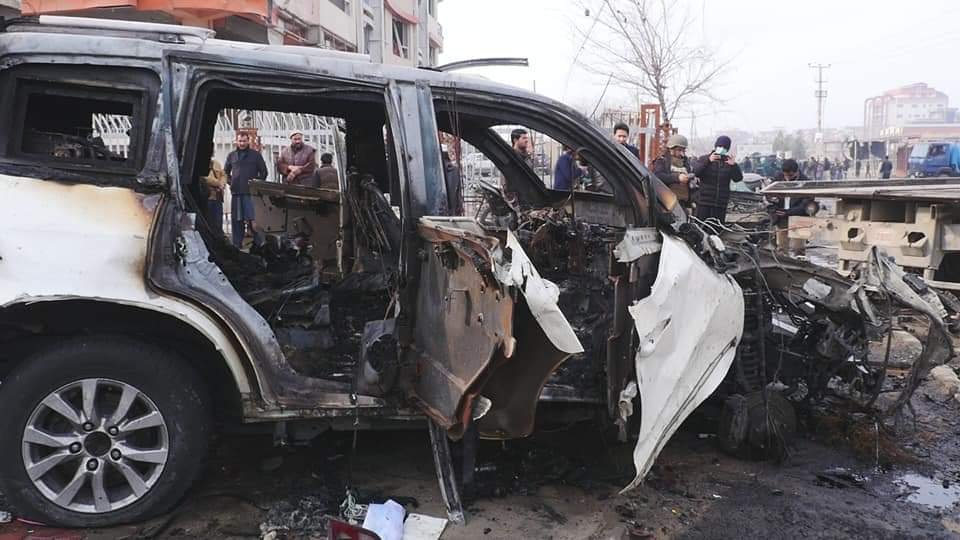 Pakistan supported Taliban terrorists killed 9 and injured 15 civilians in a Car Bomb blast that rocked the Police District 5 of Kabul on Sunday 20-December 2020.

According to the Afghan Interior Ministry statement, the blast took place in Spin Kuli, a suburban area of Police District 5 Sunday morning and as a result “eight civilians were martyred and 15 others including a parliamentarian” sustained injury.

Women and children were also among the victims, the statement added. Without naming Pakistan or Pakistan supported Taliban Terrorists, the statement said “terrorists and the enemies of Afghanistan” were behind the terrorist attack that had victimized innocent civilians.

Tariq Arian, spokesman for the Interior Ministry, said that more than 15 others were wounded in the attack including a member of parliament, Khan Mohammad Wardak.

The dead and wounded included children, women and elders. He added this was only the initial report of casualties, and that the toll could rise.

The attack happened when the Khan Mohammad Wardak, a member of parliament, convoy was passing through an intersection in Kabul’s Khoshal Khan neighborhood. The blast set afire surrounding civilian vehicles, as well as damaging nearby buildings and shops.

Pakistan supported Taliban has been desperately trying to increase the violence and their terrorist activities in Afghanistan at the behest of Pakistan to stay relevant in the talks while United States forces are leaving Afghanistan.

Yesterday in a dreadful blast in Ghazni Pakistan supported Taliban Terrorists killed at least 15 children and injured many more.

There was another suicide attack today morning as well. As per a statement by Afghanistan Ministry of Defence, “This morning, a suicide attacker wanted to attack Afghan National Army forces in Nawa district of Helmand province. with a car bomb. He was identified and eliminated by the ANA before he could reach his target. Unfortunately, 2 Afghan National Army members have received minor injuries as a result of the incident.”

Meanwhile the Afghan Security forces continued their action against Pakistan supported Taliban Terrorists. As per the statement of Ministry of defence, “A Taliban’s extortion checkpoint was targeted by Afghan Air Forces in Chahar-Dara district of Kunduz province yesterday. 7 Taliban were killed and 2 others were wounded as a result. They were extorting civilians when they were targeted by Afghan Air Forces.”

As per another statement by Ministry of Defence, Afghanistan, “Afghan National Army forces discovered and seized 45 D30 rockets ammunition in Khak Jabar district of Kabul province yesterday. Taliban had planned to use the rockets in terrorist activities in Kabul.”

Ministry of Defence, Afghanistan also reported, “16 IEDs which were placed by Taliban on public roads in Maruf and Shah Wali Kot districts of Kandahar province to kill innocent people, were discovered and safely detonated by Afghan National Army, yesterday.”

In yet another press statement by Ministry of Defence, Afghanistan, “74 Taliban were killed and 15 others were wounded in Zheria, Dand, Panjwae and Arghandab districts of Kandahar province, yesterday (19-December 2020). They were preparing to attack ANDSF positions when they were targeted by Afghan National Army. Additionally, a large amount of their weapons were destroyed.”

In one more press statement by Ministry of Defence, Afghanistan, “10 Taliban were killed in Naziyan district of Nangarhar province on 18-December 2020. They were planning to attack ANDSF positions when they were targeted by Afghan National Army. Additionally, 1 DShK machine gun and a large amount of their weapons and ammunition were destroyed during reciprocal attack of Afghan National Army.”

During the week on Tuesday 15-December 2020, The deputy governor of the Afghan capital, Kabul, was killed in a “sticky bomb” attack, security officials say. Mahboobullah Mohebi and his secretary both died on Tuesday when a device attached to their car exploded.

Attack on U.S. base in Afghanistan

Five rockets were fired at a major U.S. base in Afghanistan on Saturday, but there were no casualties, NATO and provincial officials said.

Shahkar said that 12 rockets were placed in a vehicle and five of them were fired while police were able to defuse seven others.

She couldn’t provide other details on any possible casualties or damage within the U.S. base. She said there are no casualties among civilians in the area.

A NATO official confirmed the attack and said initial reports indicated that the airfield was not damaged.

Why is the international community not declaring Taliban a Terrorist Organization?

Pakistan is the handler of Taliban terrorists and supporting the terrorist activities in Afghanistan by supplying Arms, Ammunition, funds and even sending Pakistan Army personnel under disguise of Taliban Terrorists. Why is the International Community not placing sanctions and economic blockade against Pakistan for supporting Taliban Terrorists in Afghanistan that is taking lives of innocent civilians including women and children?