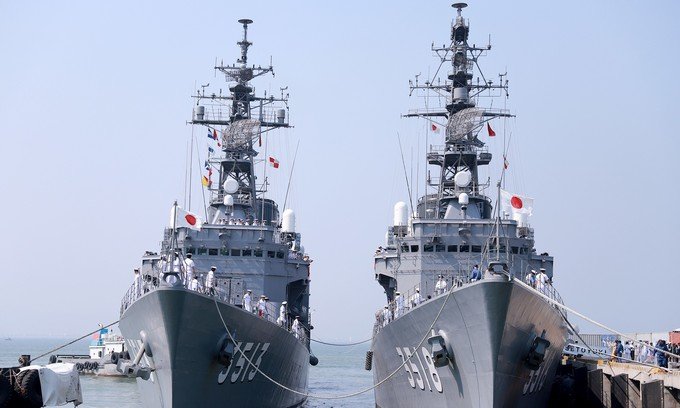 Chinese President Xi in his speech on Wednesday 25-November 2020, to the Central Military Commission while addressing military commanders urged his troops not to fear death and focus on preparing to win wars. China with its imperialist attitude has threatened not only its immediate neighbors but also countries far away. Xi has previously called for military readiness amid spiking political tensions between Beijing and other countries, particularly the US and self-ruled Taiwan, over coronavirus pandemic, territorial disputes and human rights.

All these reasons have created an atmosphere of distrust with the Communist regime in China and all the countries are preparing to defend their territories and give a credible deterrence to the Chinese expansionism.

The Ministry of Defence will get a record 5.34 trillion yen (US$51.7 billion) for the year starting in April, up 1.1 per cent from this year. With Suga’s large majority in parliament, enactment of the budget is all but certain.

Suga is continuing the military expansion pursued by his predecessor, Shinzo Abe, to give Japan’s forces new planes, missiles and aircraft carriers with greater range and potency against potential foes including neighbouring China.

China plans to raise its military spending 6.6 per cent this year, the smallest increase in three decades.

Japan is buying longer-range missiles and considering arming and training its military to strike distant land targets in China, North Korea and other parts of Asia.

A planned jet fighter, the first in three decades, is expected to cost around US$40 billion and be ready in the 2030s. That project, which will be led by Mitsubishi Heavy Industries with help from Lockheed Martin, gets US$706 million in the new budget.

Japan will spend US$323 million to begin development of a long-range anti-ship missile to defend its southwestern Okinawan island chain.

Other big purchases include US$628 million for six Lockheed F-35 stealth fighters, including two short-takeoff and vertical-landing (STOVL) B variants that will operate off a converted helicopter carrier.

The military will also get US$912 million to build two compact warships that can operate with fewer sailors than conventional destroyers, easing pressure on a navy struggling to find recruits in an ageing population.

Japan also wants two new warships to carry powerful new Aegis air and ballistic missile defence radars that have much as three times the range of older models. The government has not yet estimated the cost of the plan, which replaces a project cancelled in June to construct two ground Aegis Ashore stations.

Japan has also entered into bilateral pacts with other countries including India. In September 2020, Japan and India signed an Agreement between the two countries for Reciprocal Provision of Supplies and Services between the Armed Forces of India and The Self-Defense Forces of Japan.

There are also talks of a new defense agreement between Quad countries that include United Sates of America, Australia, Japan and India.

Will the South Asian countries be able to form a new Defence Organization on lines of NATO and prepare jointly for any Chinese threats in future?

Will all the countries in the world sue the Bio-Terrorist China that has killed over 1.69 Million people worldwide and brought world economy to a standstill? Or will they continue to enrich China with their imports from China and fill the pockets of the Bio-Terrorist Communist CCP?