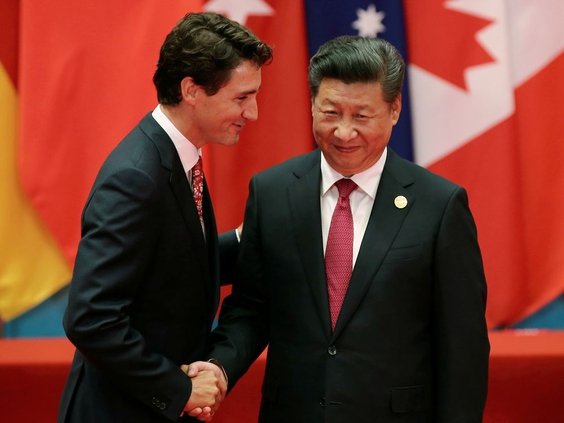 On Monday 21-December 2020, the Justin Trudeau led Canadian government published a database 339,938 businesses, charities and non-profits that have applied for and received the so far the government financial support under the Canada Emergency Wage Subsidy (CEWS) program, with several companies owned by the Chinese government being among the recipients, and one of them having connections to the ongoing genocide of Uyghur Muslims in the northwestern region of China.

It also includes anti-abortion groups like Campaign Life Coalition and the Centre for Bio-Ethical Reform, which frequently displays graphic material in its poster and mailing campaigns, as well as more than a dozen so-called crisis pregnancy centres.

The centres have come under heavy criticism from sexual health advocates in recent years amid reports they offer misleading information to pregnant individuals, including claims not backed by science.

The federal government isn’t saying how much money several Chinese state-owned enterprises and anti-abortion groups got through the wage subsidy.

Under Justin Trudeau’s faulty Canada’s Emergency Wage Subsidy program, any company which has a payroll account registered with the Canada Revenue Agency (CRA) and has experienced a drop in revenue can apply to have up to 75% of their employee’s wages subsidized by the government. Since the companies do not need to be based in Canada so long as they operate in the country, multiple foreign companies, including a number owned by the Chinese government, were able to receive subsidies under the program.

The wage subsidy was first rolled out earlier in the spring and has been modified several times since.

While a spokesperson for Deputy Prime Minister Chrystia Freeland said the government plans to review the program criteria in light of state-owned entities accessing the funds, officials are so far providing no information on whether that will include asking for repayment of the funds or changing the criteria.

Applicants are currently required only to prove a drop in revenue.

The Canada Revenue Agency CRA registry webpage notes that anyone who suspects a wage subsidy recipient is misusing the subsidy can report “suspicious activity” to the agency’s Leads Program.

Air China, a subsidiary of the state-owned China National Aviation Holdings, received wage subsidies. Air China experienced a substantial revenue drop in the first half of 2020, making them eligible for the CEWS. Air China also collaborates with Huawei. Another Chinese state-owned airline, China Southern Airlines, received subsidies under the program.

Corus Entertainment, the parent company of Global News, has previously disclosed it is among those receiving the wage subsidy as well as the amounts received in its quarterly financial records. No doubt why Chinese state run media does propaganda for Justin Trudeau.

Another major company which received subsidies under the program is a Toronto branch of the Bank of China. The Bank of China has a long history of scandal, including being accused of funneling cash from countries such as Iran and Syria to terrorist organizations such as Hamas and Palestinian Islamic Jihad, both of which are recognized as terrorist organizations by the Canadian government.

Earlier this year, the Bank of China settled a money laundering probe for $4 million. It was also revealed earlier this year that Foreign Affairs Minister François-Philippe Champagne held two mortgages collectively valued at $1.2 million with the Bank of China, raising questions surrounding the minister’s potential conflicts of interest.

Industrial and Commercial Bank of China, another state-owned Chinese bank, which has been connected to money laundering, received CEWS support. Four employees of the company recently received prison sentences and fines of $25.55 million in Spain for their role in a money laundering scheme.

China Mobile received wage subsidies under the program and, according to the US government, has links to the People’s Liberation Army (PLA), China’s military. Last month, US President Donald Trump signed an executive order banning Americans from investing in companies with links to the PLA, with China Mobile being one of the companies on the list. In Canada, however, such a company is apparently applicable for state subsidies.

China Mobile has also reportedly invested in a company called Dahua, which provides surveillance technology for the Chinese government to use against their Uyghur Muslim minority, which the Chinese government is currently committing a genocide against. They received financial support from the Canadian government despite a report from the Liberal-dominated Parliamentary Subcommittee on International Human Rights calling upon the government of Canada to “take the necessary steps and conduct a review to ensure Canadian individuals, companies and public bodies are not investing in technology companies involved in supporting or facilitating the abuse of fundamental human rights in China.”

A final company to receive financial support from the CEWS program is Petrochina which, despite the Trudeau government’s supposed commitment to curbing climate change, is responsible for nearly 1% of all greenhouse gas emissions emitted globally over the past 270 years even though the company was only founded in 1999.

Entities that fraudulently received the subsidy can be asked to return the amount they received plus up to 25 per cent extra if, for example, they are found to have artificially lowered their revenues.

As of Dec. 13, the program has given out $54 billion in wage subsidies, and is slated to remain in place until June 2021.

Other government programs assessing eligibility for access to taxpayer funds, such as the Canada Summer Jobs program, disqualify applicants whose activities “actively work to undermine or restrict a woman’s access to sexual and reproductive health services” or that advocate discrimination.

One government official said the focus of the wage subsidy was on getting money out the door as quickly as possible, but that the government will continue defending reproductive rights.

The revelations comes not long after it was revealed that the Canadian government invited the Chinese military to train on Canadian soil, a training exercise which was cancelled after the Chinese government kidnapped and arbitrarily detained two Canadian citizens.

Justin Trudeau had announced on 12-May 2020 that Canada had struck an agreement with the Tianjin-based firm to conduct another phase 1 trial, which essentially measures whether the vaccine is safe and generates an immune response, followed if successful by phase 2 and 3 trials here. However, Chinese scientists who were working on a vaccine partnership with Canada were part of a government program to transfer research and knowledge to Beijing.

Despite the fact that Justin Trudeau’s love for China has already Canadians at risk, Justin Trudeau continues to fill the Chinese deep pockets.

How long Justin Trudeau will continue to deceive Canadian Tax Payers and continue to play to the tunes of the Terrorists and above all the biggest Bio-Terrorist China that killed over 1.73 Million people worldwide using the Bio-Weapon of Chinese Corona Virus and brought the world economy to a standstill?