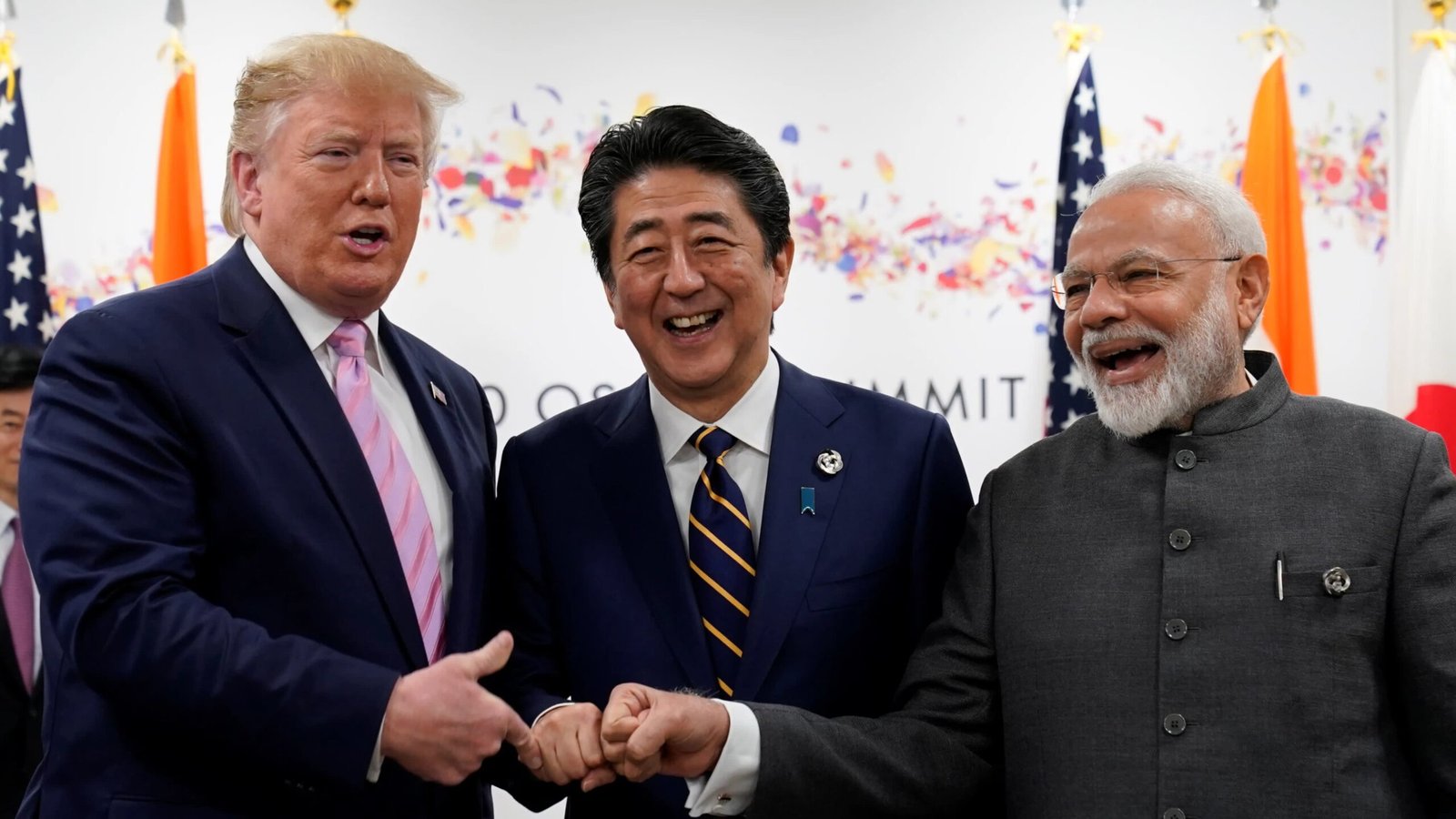 Since June 2020, Ladakh Sector is already hot since China tried to capture more Indian Territory in Ladakh sector. However Indian forces repulsed the Chinese advances and are still standing guarding their positions in freezing cold winters. In a violent face-off between Chinese PLA and Indian Soldiers at Galwan Valley, one of the four clash points in the eastern Ladakh sector in June 2020, 20 unarmed Indian soldiers were killed by Chinese PLA weilding Nail studded Rods. In retaliation, Indian Soldiers killed over 100 Chinese PLA soldiers. Since then China is already jittery since India has shown the world that using courage world can stand against China.

Quad is India’s second military front against China. China is Bound to be jittery over Quad

Quad is the solution devised by United States of America, Japan, Australia and India to deal with Chinese Hegemony and use of greater military and economic power to threaten its neighbors.

The navies of Australia, India, Japan and the United States held their biggest naval drills in November 2020, sending warships, submarines and aircraft to the Indian Ocean, in a move analysts said signalled the four countries’ seriousness in countering China’s military and political influence in the Indo-Pacific region.

exercises were part of an effort aimed at containing China’s rise and labelled the four-country alliance “the Asian version of NATO” – a term first used by China’s top diplomat to describe the informal grouping known as the Quadrilateral Security Dialogue, or simply, the Quad.

The group first came together in 2007, touting the vision of a free and open Indo-Pacific, only to disband within months amid protests from China. Its revival a decade later came amid worsening bilateral ties between China and the US, India and Australia.

Several meetings between the QUAD countries have taken place alread. According to the State Department, during the last meeting, the officials discussed ways to coordinate efforts to support countries vulnerable to “malign and coercive economic actions” in the Indo-Pacific region.

They also explored opportunities for future Quad engagement on topics ranging from humanitarian assistance and disaster relief to coordinating efforts on the coronavirus pandemic response and vaccines, it said.

The Japanese Foreign Ministry said in a separate statement that the participants also discussed regional situations such as North Korea and the East and South China seas, where Beijing’s maritime assertiveness has been increasing.

“The first time the Quadrilateral grouping was proposed, it was a far more tentative partnership,” said Herve Lemahieu, director of the power and diplomacy programme at the Sydney-based Lowy Institute. “Australia in particular was sceptical of the need for a Quad and it was wary of upsetting diplomatic relations with China. That’s why the initial iteration fell apart.

“Since then, there has been a hardening of attitudes towards China among all the Quadrilateral partners,” he said. “And in that sense, Beijing has been its own worst enemy.”

Under President Xi Jinping, China’s most powerful leader since Mao Zedong, Beijing has become more nationalistic and assertive. It has cracked down on pro-democracy protesters in semi-autonomous Hong Kong, interned more than one million Muslims in the far western region of Xinjiang and stepped up threats of military force to seize the self-ruled island of Taiwan.

It is also rapidly modernising its defence forces and increasing its military presence in the disputed waters of the South China Sea and the East China Sea.

This April, with the world distracted by the coronavirus pandemic, a Chinese Coast Guard vessel rammed and sank a Vietnamese fishing boat close to the Paracel islands in the South China Sea. Later, a standoff between a Malaysian oil exploration vessel and a Chinese survey vessel, off Malaysia’s Borneo, prompted the US and Australia to deploy warships to the area.

The Philippines, Malaysia, Vietnam and Taiwan all lay claim to parts of the energy-rich waters, but Beijing, which claims almost the entire area under its decades-old “nine-dash line”, has been extending its reach by building military bases on reefs and rocky outcrops.

A United Nations tribunal ruled in 2016 that China’s “historical rights” had no basis in the law.

On China’s Himalayan frontier with India, long-simmering tensions boiled over in June, with troops from both sides fighting each other with clubs and stones in the Galwan Valley. The clashes left 20 Indian soldiers dead and was the first fatal confrontation between the two sides since 1975.

Friction also increased in the East China Sea, where China has a territorial dispute with Japan, with the US accusing Beijing in July of “unprecedented” military incursions into the disputed waters.

“The Quad comes about as an effort to try to deter China’s ability to challenge and disrupt the rules-based order and the status quo in the Indo-Pacific region,” said Lemahieu. “It’s a signalling on the part of these four democracies that they are and they would get even more serious about acting as a military and strategic counterweight to China, if Beijing were to continue to challenge [the status quo], not just in the South China Sea but also in the Indian Ocean.”

What also worries the four countries, Lemahieu said, is China’s willingness to exploit “economic interdependencies to try to level informal sanctions” to punish countries that oppose it.

For instance, this year, Beijing slapped trade sanctions on Australia, after Canberra backed an inquiry into the origins of the coronavirus. It suspended some beef imports on a technicality and effectively blocked barley imports by imposing huge tariffs on the Australian grain. Australian traders are now expecting more sanctions on exports of Australian wine, timber and even lobsters.

Under outgoing President Donald Trump, Washington seems to be advocating for a classic, Cold-War style, containment strategy. US-China relations have plummeted to an all-time low – owing to disputes over trade, the coronavirus pandemic and Beijing’s crackdowns in Xinjiang and Hong Kong. Secretary of State Mike Pompeo earlier this year framed the effort as an ideological battle and called it the “mission of our time”.

And in October, following a meeting of the Quad foreign ministers in Tokyo, Pompeo railed against what he called the Chinese Communist Party’s “exploitation, corruption and coercion”, adding it was “critical now more than ever” that the four countries collaborate to counter China.

China has used its “super-sized” economy as a bargaining chip, such as in Australia, and some others may also be wary of Chinese offers of aid, with many poorer countries already heavily indebted to Beijing.

for all of China’s attempts to portray the Quad as a US-led “Asian NATO”, the grouping was unlikely to become a formal security alliance, said Gregory Poling, director of the Asia Maritime Transparency Initiative at the US-based Center for Strategic and International Studies.

The combination of US, Japan, Australia and India lends the Quad “an enormous amount of diplomatic weight”, he continued, because criticism from a grouping that also includes non-aligned India is harder for China to brush off.

“Their ultimate goal,” Poling said, “has to be to convince Beijing that if it wants to be a global leader, it will have to follow certain rules. None of the Quad members have enough weight to impose costs and convince China on their own. But maybe the Quad as a unit, working in collaboration with the Europeans on some specific issues, Southeast Asians on other issues, maybe that does have enough weight to convince Beijing that if it wants to play the global role it envisions for itself, then it will have to moderate its behaviour.”

Will Japan, Australia, US and India make Quad a powerful NATO kind front against China with some teeth to fight Chinese aggression against any of Quad member countries?

Will Other Asian and European countries support Quad alliance against China?

Will Quad Countries use combined economic power to impose sanctions and economic costs on any countries that side with Imperialist China?

When will the International community gather courage to sue the Bio-Terrorist China that killed over 1.83 million people worldwide using the Bio-Weapon of Chinese Corona Virus?