China Authorized Its Pugnacious Coast Guard To Use Force Amid Disputes 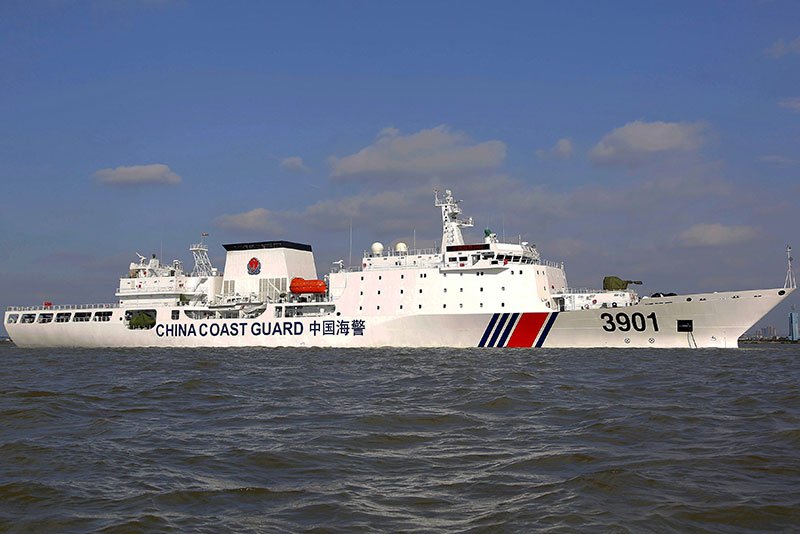 China has authorized its pugnacious coast guard to fire on foreign vessels and destroy structures on features it claims, potentially raising the possibility of clashes with regional maritime rivals.

The Coast Guard Law passed on Friday 22-January 2021 empowers the force to “take all necessary measures, including the use of weapons, when national sovereignty, sovereign rights, and jurisdiction are being illegally infringed upon by foreign organizations or individuals at sea.”

The law also authorizes the coast guard to demolish other countries’ structures built on reefs and islands claimed by China and to seize or order foreign vessels illegally entering China’s territorial waters to leave.

Effective July 1 2018, The China Coast Guard was absorbed into the country’s Central Military Commission (CMC) after the transfer of command from the State Oceanic Administration.

More than 16,000 personnel and the 135 patrol and cruise vessels of the Chinese maritime law-enforcement force were put at the beck and call of the People’s Liberation Army (PLA) and its command and control.

China’s coast guard is the most pugnacious force of its kind in the region and is already active in the vicinity of uninhabited East China Sea islands controlled by Japan but claimed by Beijing, as well as in the South China Sea, which China claims virtually in its entirety. Those activities have brought the coast guard into frequent contact with air and sea forces from Japan, its chief ally the U.S., and other claimants to territory in the South China Sea, including Vietnam, Malaysia and the Philippines.

Both water bodies are considered potential flashpoints and the law’s passage may be a signal that China is preparing to up the stakes over what it considers its key national interests.

Controlling them is a strategic imperative if China wishes to displace the U.S. as the dominant military power in East Asia, while the resources they contain, including fish stocks and undersea deposits of oil and natural gas, may be key to maintaining China’s continued economic development.

Its not only in South China Sea, Chinese fishing vessels have intruded and fishing in Arabian Sea, around African continent, near South American waters as well.

Recently Chinese fishing vessel and its 28 crew have been detained in Palau, authorities said, creating a delicate diplomatic situation for the tiny Pacific nation, which is allied with Beijing’s rival Taiwan.

A report from the London-based Overseas Development Institute this year said: “Having depleted fish stocks in domestic waters and encouraged by subsidies, China’s distant-water fishing fleets have been travelling farther and farther afield, and its companies have been building more and more vessels to meet the rising demand for seafood.”

In August 2020, just off the Galapagos Islands, an armada of nearly 300 Chinese vessels logged 73,000 hours of fishing in a month, hauling in thousands of tonnes of squid and fish.

China continues to exploit the loop holes in the Internatonal Law and continues to fish in the waters near to other countries. The International Law says all the Sea water beyond 200 Nautical miles of the coast of any country is International waters. Chinese have mostly exploited that loop hole. Chinese vessels have gone to fishing as far as South American and African Waters and there is no stopping. While the other contries live with depleted fishing stocks, China continues to loot the fish resources all over the world.

The Irony is that, China does not want anyone else to venture into the South China Sea for either Fishing or for exploring natural resources.

What Right has China to go fishing in the sea near Argentina or West Africa or Indian Ocean? Is it not the flaw in International Laws that permit rogue countries like China to bring poverty and misery to other Billion people whose lives depend on fishing and ancillary industries? Shouldn’t such International Laws be struck down and either new laws be made or such conflicts can spiral into future wars.

When China does not allow other countries to venture into South China Sea either for fishing or for exploring natural resources, what rights China has got to enjoy Chinese Illegal Fishing Loot from waters belonging to other nations.

Does that mean the International Laws are put to use only to the convenience of the Chinese to allow them to continuously enjoy the Chinese Illegal Fishing Loot and use such laws to prevent others from doing the same?