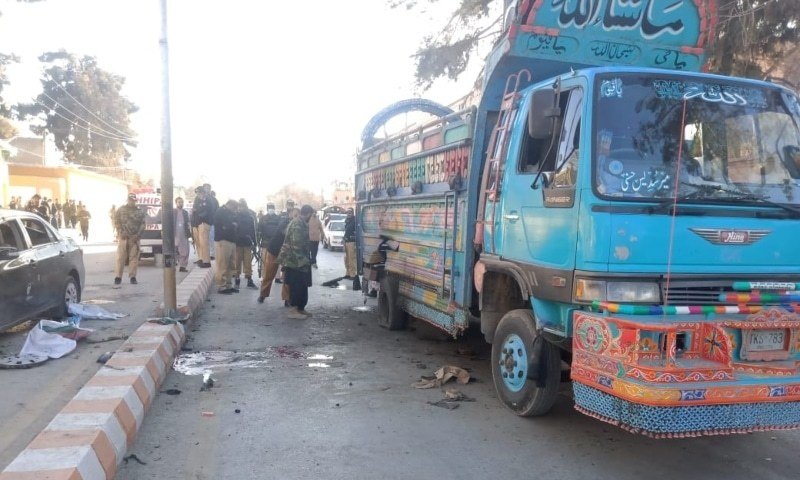 Balochistan rejects Pakistani propaganda. In 2 separate blasts by Baloch Freedom Fighters, 2 Pakistani Intelligence operatives were killed and 26 others were injured, during rallies organized by Pakistan Intelligence Agency ISI to Protest against India.

According to Quetta Civil Hospital Medical Superintendent Arbab Kamran, the bodies of two Pakistanis were brought to the facility, while four injured persons were brought for treatment.

Quetta Deputy Commissioner retired Major Aurangzeb Badini said the Quetta blast was targeted at a Kashmir Solidarity Day rally that was passing from the area. He added that the nature of the blast couldn’t be ascertained as yet.

Security forces cordoned off the area after the explosion while evidence was being collected.

BLA claimed responsibility of the attack. Jeeyand Baloch, spokesman for the Baloch Liberation Army in a press statement released on their Telegram Channel gave the information

BLA sarmachars adopted various strategies to protect ordinary passers-by from the blast. Sarmachars had planted magnetic bombs on the main truck of the so-called Kashmir rally. The rally was targeted when it was being carried out on Inskamb Road. As a result of the attack, two people were killed in the rally, including a gunman, while four others were injured.

The Pakistan Army is using all its strength to hold such rallies in Balochistan with the help of its local operatives in an attempt to give the impression that the situation in Balochistan is completely under the control of the Army and the Baloch people are agreed with Pakistan and its army. While the ground realities are quite the opposite, Balochistan and Pakistan are only related as oppressed and oppressor. Our friends, enemies, our interests and the issues of our national survival are completely different.

The Pakistani army and its local operatives are using fear and greed to hold such rallies. On several occasions we have issued stern warnings that if any person attends such Pakistani rallies, meetings or gatherings aimed at harming the Baloch movement and the Baloch National Manifesto, he will be solely responsible for any loss of life and property. We want to make it clear that in the future, attacks on such anti-Baloch gatherings will be intensified.

Earlier in the day, at least 24 people were injured in a blast targeting a Kashmir Solidarity Day rally in Balochistan’s Sibi district, officials and eyewitnesses said.

A spokesman for Baloch Republican Army (BRA), Beebagr Baloch, said in a statement issued to the media today, “Our Sarmachars (Freedom Fighters) did a granade attack on so-called Kashmir Rally Organied by Pakistan Intelligence Agencies in Sibi at Chakar Khan Road and targeted more than 16 state tools and police personnel were seriously injured.

He further said that the state has kept the atrocities on Baloch and on the Baloch homeland, the houses of ordinary Balochs are being demolished, thousands of Baloch people have gone missing while the state has created state death squads and local thieves and by organizing so-called rallies with the help of looters, they are trying to divert attention from the Baloch issue by misleading the civilized world, against which we will intensify our struggle on all fronts.

“We appeal to the people not to be misued by the state tools and stay away from these so-called rallies as they are our target,” he added.

Balochistan Freedom Fighters on a motorcycle lobbed a hand grenade at Luni Chowk, which resulted in injuries to 16 Pakistani state actors that Pakistan Intelligence Agency ISI had gathered for Kashmir Solidarity Day rally. The number of injured persons later rose to 24.

The blasts come two weeks after four members of the Sibi Scouts, a wing of the Frontier Corps’ North Wing, were killed and five others injured when their vehicle hit a landmine in Sangaan area of Sibi.

Sources had said at the time that Baloch Freedom Fighters had planted a landmine in the area, which went off when a vehicle carrying the security personnel ran over it.