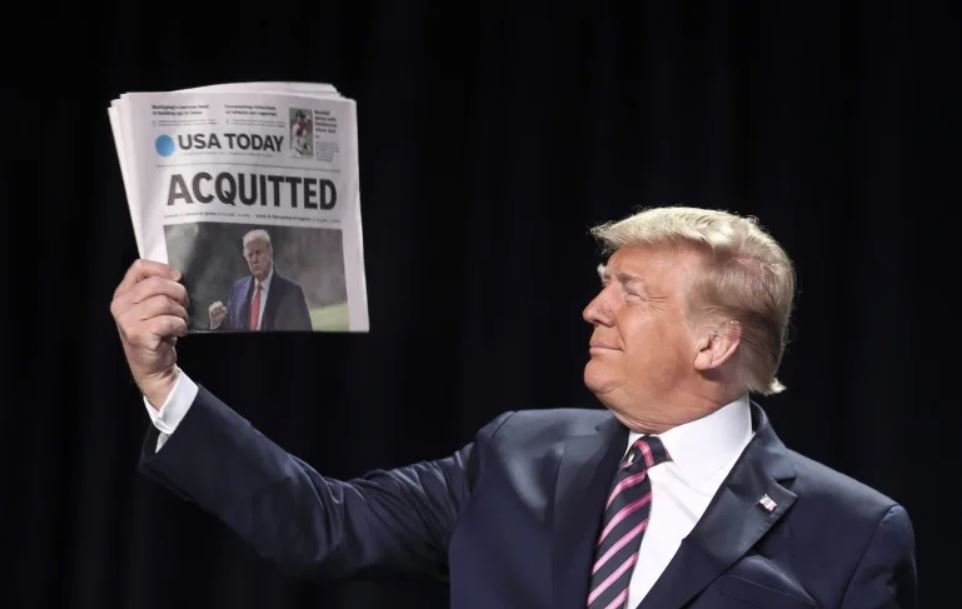 With 67 senators required to convict Trump of inciting an insurrection, the vote was 57 guilty and 43 not guilty in the 100-member Senate.

Senate Democrats failed to bring over enough Republicans to secure the two-thirds supermajority needed for a conviction.

While all 50 Democrats voted to bar Trump from holding public office ever again, they only managed to rally seven Republicans to their cause.

Seven Republican senators voted with the Democrats to convict Trump, the first time more than one member of the president’s own political party have voted in favour of conviction.

They were Mitt Romney of Utah, Lisa Murkowski of Alaska, Richard Burr of North Carolina, Bill Cassidy of Louisiana, Susan Collins of Maine, Pat Toomey of Pennsylvania and Ben Sasse of Nebraska.

A year ago, Trump was acquitted by the Senate on two articles of impeachment.

He was found not guilty of abuse of power for pressuring Ukraine to announce a probe into President Joe Biden and his son, Hunter, by a vote of 52-48, with 52 Republicans voting for acquittal and 47 Democrats, along with Romney, voting to convict.

With 67 senators required to convict, Trump was acquitted of obstruction of justice by a 53-47 vote along party lines.

Trump, who has stayed silent since his January 11th impeachment, immediately looked to boost the morale of his legions of supporters, saying he had a “vision for a bright, radiant, and limitless American future.”

He extended his thanks to his legal team and to Republican senators.

“I want to first thank my team of dedicated lawyers and others for their tireless work upholding justice and defending truth,” Trump said. “My deepest thanks as well to all of the United States Senators and Members of Congress who stood proudly for the Constitution we all revere and for the sacred legal principles at the heart of our country.”

Switching his focus to the trial, he described it as “yet another phase of the greatest witch hunt in the history of our Country,” and struck out at the Democrats in the House of Representatives who had impeached him, accusing them of being motivated by “political vengeance” to “persecute, blacklist, cancel and suppress all people and viewpoints with whom or which they disagree.”

Trump’s words were echoed by his lawyer, Michael van der Veen who labelled the trial a “maniacal crusade” by the Democrats.

“This impeachment has been a complete sham form beginning to end,” he said.

“The entire spectacle has been an unhinged pursuit of a long standing political vendetta.

“Democrats were obsessed with impeaching Mr Trump from the very beginning of his term. Now, they have conducted a phony impeachment show trial when he is a private citizen out of office.”

After the Senate voted to acquit Donald Trump, Speaker Nancy Pelosi on Saturday (local time) said that she was against the possibility of censuring the former US President in the Senate as that would be just a “little slap on the wrist”.

She further said that people are not censured for inciting the Capitol riot but on “people for using stationery for the wrong purpose”.

“Oh, these cowardly senators who could not face up to what the president did and what was at stake for our country are now going to have a chance to give a little slap on the wrist?” she added.

Pelosi added that the House was going to investigate everything regarding the January 6 events at the Capitol, to ensure that such events never happen in the US again

While no action is taken against Democrats that incited the riots and protests by BLM and Antifa terrorists during whole year of 2020 all over the United States in which many people lost their lives and Billions of dollars worth property was destroyed, malicious witch hunt has started against Donald Trump. Democrats are crying as Trump is acquitted.

People are asking why no action is taken against the Democrats for BLM and Antifa Terrorist riots.

New York prosecutors are investigating financial dealings around some of Donald Trump’s signature Manhattan properties, extending the known range of the criminal probe of the former president and his company, according to people familiar with the matter.

All of the loans under scrutiny were made to Mr. Trump by subsidiaries of Ladder Capital Corp. , a New York City-based real-estate investment trust, the people said. Since 2012, Ladder Capital has lent Mr. Trump more than $280 million for the four Manhattan buildings, according to property records.

Lawyers for Mr. Trump and the Trump Organization declined to comment. Mr. Trump has called the probe a partisan “witch hunt” led by Manhattan District Attorney Cyrus Vance Jr., a Democrat. Mr. Trump’s lawyers have called the investigation a “fishing expedition” in Mr. Vance’s bid to get the former president’s tax returns.

Mr. Vance’s office has said in court filings that it is pursuing a complex investigation into alleged insurance and bank fraud by the Trump Organization and its officers.

New York Attorney General Letitia James is also conducting a civil-fraud investigation into properties. However, Trump and the Trump organization have decried the investigations as politically motivated.

One social media user tweeted, “Dear @jack , since former president Donald Trump was acquitted on incitement, it is now expected that you re-enable his @twitter account. Or are you now judge, jury and executioner?”

On the other hand, the “Supreme President of America”, Facebook’s Oversight Board is deliberating if it should allow the punny little American President Trump should be permitted to continue on its platform or not.

As per a report, Facebook had recently announced the formation of an ‘independent’ oversight board to regulate content on its platform and determine whether posts violate the platform’s norms on nudity, hate speech and insensitivity. The investigation has now revealed that 90 per cent of the board’s members “collaborated with or are tied to groups that have received funding from George Soros’ Open Society Foundations.”

Helle Thorning-Schmidt, former Prime Minister of Denmark, Catalina Botero-Marino, Afia Asantewaa Asare-Kyei and Sudhir Krishnaswamy are some of the members on the oversight board with ties to George Soros. Other members with links to the liberal billionaire include Ronaldo Lemos, Michael McConnell, Alan Rusbridger and Andas Sajo.

An OpEd on the New York Times by the oversight board claimed, “The board members come from different professional, cultural and religious backgrounds and have various political viewpoints.” It added, “Some of us have been publicly critical of Facebook; some of us haven’t.”

“Facebook committed to creating an independent oversight body that will review Facebook’s decisions about what content to take down or leave up. Over the past 18 months, more than 2,000 experts and other relevant parties from 88 countries have contributed feedback that has shaped the development of this oversight board, which will have 20 members (ultimately growing to 40) and is scheduled to become operational this year,” it stated.

However, such statements are unlikely to assuage the concerns of conservatives who feel that social media platforms are increasingly curbing their freedom of expression selectively. Of late, it has become increasingly apparent that social media platforms are biased against conservative political opinion. The conduct of Twitter with regards to US President Donald Trump has left very little room for doubt.

Will any action be taken against the Democrats that incited Riots and Violence by BLM and Antifa Terrorists all over the United States during 2020? Or will Antifa Terrorists be also nominated for Noble Peace Prize like BLM?

What will democrats tell the family members of the people who got killed during riots by Antifa Terrorists and BLM protesters? Will their killings be condoned?