China Refuses To Accept America Is The Super Power, That Too On American Soil 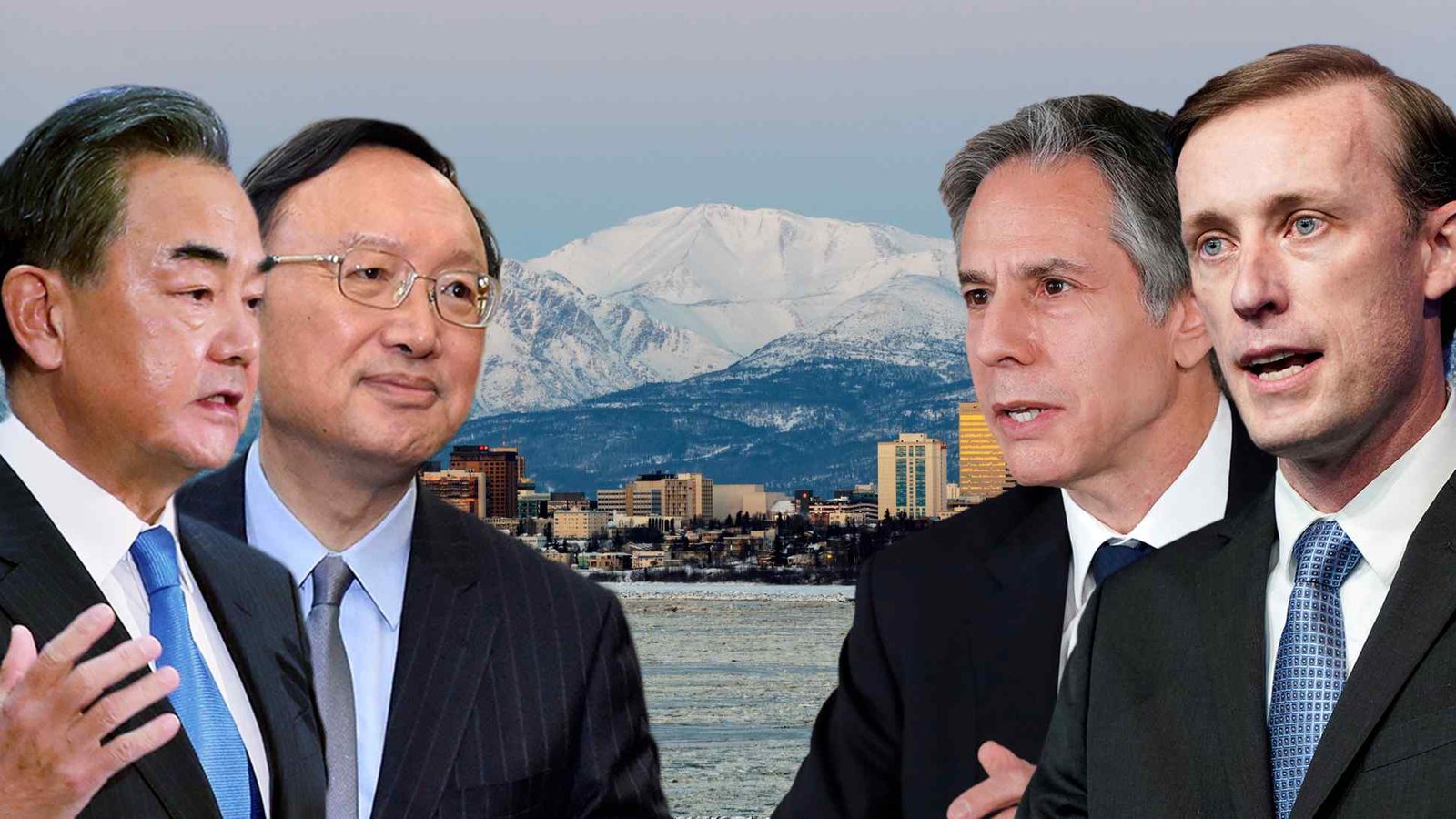 During the first high-level talks between the United States and China since President Joe Biden took office, China Refuses to Accept America is the Super Power, that too on American Soil. Chinese side openly telling white lies and threatening United States in the process.

Secretary Blinken in his opening remarks also expressed deep concerns and obligation to raise issues on actions by China, including in Xinjiang, Hong Kong, Taiwan, cyber attacks on the United States, and economic coercion toward US allies. Each of these actions threaten the rules-based order that maintains global stability. He also expressed his obligation to discuss about other areas of concern, from economic and military coercion to assaults on basic values.

National Security Advisor Sullivan, said, “We’ll make clear today that our overriding priority from the United States’ side is to ensure that our approach in the world and our approach to China benefits the American people and protects the interests of our allies and partners. We do not seek conflict, but we welcome stiff competition and we will always stand up for our principles, for our people, and for our friends.”

However Chinese Side was not prepared to take any blame home and using white lies fired its salvoes on the United States.

Director Yang (Via interpreter) said that Chinese People are wholly rallying around the Communist Party in China. He seems to have excluded the entire population of Ughyur Muslims in Xinjiang, Tibetans in Tibet and people of Hong Kong when he made this absurd claim.

For China, we are now in a historic year where we will move from finishing the first centenary goal to the second centenary goal, and by the year 2035 China will surely achieve basic modernization.  And by the year 2050, China will achieve full modernization.  China has made decisive achievements and important strategic gains in fighting COVID-19, and we have achieved a full victory in ending absolute poverty in China.  China’s per capita GDP is only one-fifth of that of the United States, but we have managed to end absolute poverty for all people in China.  And we hope that other countries, especially the advanced countries, will make similar efforts in this regard.  And China has also made historic achievements in building the country into a moderately prosperous one in all respects.  The Chinese people are wholly rallying around the Communist Party of China.  Our values are the same as the common values of humanity.  Those are: peace, development, fairness, justice, freedom, and democracy.

He openly questioned the democracy model of United States and praised their Chinese-style democracy. One would laugh when Yang called Chinese rule as “democracy” that has no elements of Democracy present in it.

Director Yang further made some ludicrous claims and one would only laugh when he said China does not believe in invading through the use of force, or to topple other regimes through various means or to massacre the people of other countries. He was clearly hiding the Chinese Debt Trap diplomacy that has been responsible in taking control of regimes in many countries and even toppling democratic governments using secretive means including funding the protests, bribing opposition parties, taking control of the strategic assets and even toppling governments.

The wars in this world are launched by some other countries, which have resulted in massive casualties.  But for China, what we have asked for, for other countries, is to follow a path of peaceful development, and this is the purpose of our foreign policy.  We do not believe in invading through the use of force, or to topple other regimes through various means, or to massacre the people of other countries, because all of those would only cause turmoil and instability in this world.  And at the end of the day, all of those would not serve the United States well.

Director Yang then told US side to stop advancing its own democracy in the rest of the world and based of CCP Chinese Communist party conducted biased opinion polls again made the ludicrous claim that Communist leaders have wide support in Chinese people. He said :-

Director Yang again used this opportunity of the talks to run a smear campaign against United States.

So what we need to do is to abandon the Cold War mentality and the zero-sum game approach.  We must change the way we think and make sure that in this century, the 21st century, countries big or small, particularly the big countries, should come united together to contribute to the future of humanity and build a community with a shared future for humankind.  It’s also important for all of us to come together to build a new type of international relations, ensuring fairness, justice, and mutual respect.  And on some regional issues, I think the problem is that the United States has exercised long-arm jurisdiction and suppression and overstretched the national security through the use of force or financial hegemony, and this has created obstacles for normal trade activities, and the United States has also been persuading some countries to launch attacks on China.

While Japan and South Korea have always expressed their concerns about the growing Chinese hegemony in South China Sea, Director Yang tried to deflect the concerns of these countries. He said :-

And as for China, we believe and we have handled import- and export-related issues according to scientific and technological standards.  Secretary Blinken, you said you just came back from Japan and the ROK.  Those two countries are China’s second and the third largest trading partners.  ASEAN has now become China’s largest trading partner, overtaking the European Union and the United States.  So we do hope that the United States will develop sound relations with all countries in the Asia-Pacific.  We should have many mutual friends.  This is the right way forward in the 21st century.

Related Article Japan Urged Joe Biden to Stand Up Against China and Support Taiwan As President Trump Did.

He further clarified Chinese position of no interference in China’s internal affairs and claimed threats of invasion to Taiwan to be an internal affair of China.

And with Xinjiang, Tibet, and Taiwan, they are an inalienable part of China’s territory.  China is firmly opposed to U.S. interference in China’s internal affairs.  We have expressed our staunch opposition to such interference and we will take firm actions in response.

Director Yang also deflected the questions of Human Rights violations against Ugygur Muslims in Xinjiang, Tibetans in Tibet, people of Hong Kong and instead questioned Human Rights within US including the Chinese funded BLM.

Chinese side was in no mood to discuss anything other than the economic relations and used the words “new circumstances” and “changed circumstances” indirectly pointing to the Chinese economic and military power.

And I believe that for our two countries, under the new circumstances, we need to enhance communication, properly manage our differences, and expand our cooperation instead of engaging in confrontation.

Related Article : China Authorized Its Pugnacious Coast Guard To Use Force Amid Disputes

Director Yang also denied the US allegations of Chinese Cyber Attacks and instead blamed US for the Cyber attacks. He said:-

On cyber attacks, let me say that whether it’s the ability to launch cyber attacks or the technologies that could be deployed, the United States is the champion in this regard.  You can’t blame this problem on somebody else.

From the Chinese side, confident the way they have used the debt trap diplomacy successfully in many African and Asian countries and successfully winning their votes in various UN agencies elections, Director Yang further said that US does not represent international public opinion. He said :-

Chinese State Councilor Wang  (Via interpreter) also took the opportunity to spread the Chinese smear campaign and accused US of using hegemonic practices and interfering in China’s internal affairs. He also pointed to US sanctions against China regarding Hong Kong and expressed Communist party’s outrage. He said :-

And China certainly in the past has not and in the future will not accept the unwarranted accusations from the U.S. side.  In the past several years, China’s legitimate rights and interests have come under outright suppression, plunging the China-U.S. relationship into a period of unprecedented difficulty.  This has damaged the interests of our two peoples and taken its toll on world stability and development, and this situation must no longer continue.  China urges the U.S. side to fully abandon the hegemonic practice of willfully interfering in China’s internal affairs.  This has been a longstanding issue and it should be changed.  It is time for it to change.  And in particular, on the 17th of March, the United States escalated its so-called sanctions on China regarding Hong Kong, and the Chinese people are outraged by this gross interference in China’s internal affairs and the Chinese side is firmly opposed to it.

He further questioned the US motives behind the sanctions against China just before the US-China talks. He said that these sanctions are miscalculated and only reflects the vulnerability and weakness inside the United States :-

Anchorage is a midpoint between China and the United States, but after all, it’s still the United States territory, and I accept that the Chinese delegation has come here at the invitation of the United States.  However, just the other day, before our departure, the United States passed these new sanctions.  This is not supposed to be the way one should welcome his guests, and we wonder if this is a decision made by the United States to try to gain some advantage in dealing with China, but certainly this is miscalculated and only reflects the vulnerability and weakness inside the United States.  And this will not shake China’s position or resolve on those issues.

Complete Text of the report can be read at https://www.state.gov/ website.

Reading through the text above, wasn’t this high level meeting in Alaska used by the Chinese side to run their smear campaign against United States rather than expecting any fruitful economic relations?

Why wasn’t the Chinese side accused of using Chinese Corona Virus as a bio-weapon that killed over 2.69 Million people worldwide and brought the world economy to a standstill while China made windfall gains by selling everything needed from masks to ventilators and other protective gears?

Why was there no accusations against China of what China is doing in South China sea by claiming entire South China Sea as its own territory?

Will US take tough stand and stand by its decisions against China as was done by President Trump? Or these are just the tough talks to extract advantage out of China in trade deals as pointed out by the Chinese side?