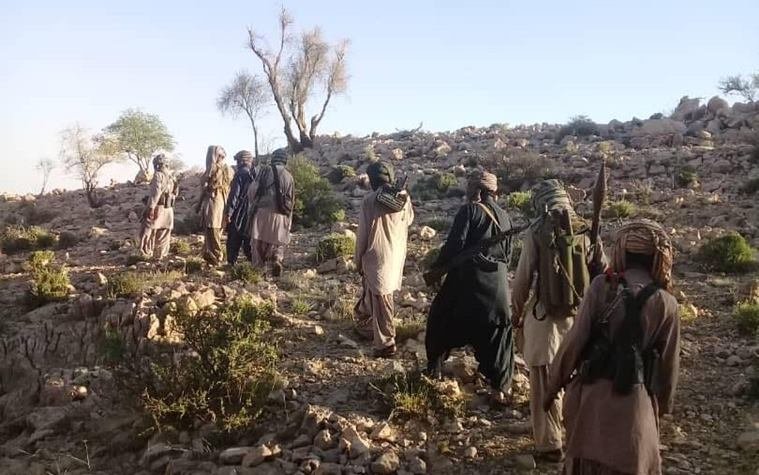 As per the statement issued by Balochistan Liberation Army:-

We targeted a Pakistan army vehicle with a remote-controlled device in Nisao area of Kohlu, killing nine personnel.

Today, at around 8 pm on Monday, our fighters targeted a convoy of Pakistan Army with a remote-controlled explosion in Nisao Kahur Chartan area of Kohlu district.

As a result of the attack, the vehicle was completely destroyed and 9 personnel on board were killed.

Our organization, the Baloch Liberation Army, accepts responsibility for the attack.

Our fighters targeted the convoy of Pakistani forces when they were heading towards Barkhan after carrying out an offensive.

Such attacks of ours will continue until an independent and sovereign Baloch state is established.

Press release was signed by Azad Baloch, Spokesperson of the BLA.

Pakistan is already a bankrupt nation with Chinese Debt noose is hanging around its neck. In order to pay interest on Chinese Debt, Pakistan is handing over mines, resources and strategic assets in resource rich Pakistan occupied Balochistan to the Chinese. While the local population in Pakistan Occupied Balochistan is suffering with extreme Poverty, Pakistan continues to exploit its resources for paying off debts of Punjabi Pakistan. If Bloch civilians protest, Pakistan Army burns the entire villages, disappear the men from the villages, abduct Baloch women and send them to the rape cells.

In another press release dated 28-March 2021, another Balochistan Freedom Fighters group Baloch Republican Army (BRA) claimed responsibility of an attack on another Pakistan Army convoy. Press release mentioned about causing heavy life losses but did not give the figures of casualties on Pakistan Army side as a result of the attack.

Here is the press release issue by BRA:-

Our Sarmachars attacked the convoy of the occupying Pakistani forces this morning in Nag area of Kolwah with heavy and automatic weapons, causing heavy life losses and economical.

The convoy was attacked while the forces were preparing to launch an operation against the civilian population. The defeated forces after losing in hands of Baloch Sarmachar, started burning the houses of poor peoples, which shown its fascism and brutalities to world.

Our operations will continue till the establishment of an independent Balochistan.

In the first attack foot soldiers travelling with a convoy of Pakistani military were targeted. The IED attack neutralised one enemy personnel and injured another.

BLA fighters also targeted the evacuation team of Pakistani Army, who arrived at the attack sight a while later. In this IED attack two personnel of Pakistani Army’s bomb disposal squad were killed and another was injured.

BLA freedom fighters also had combats with Pakistani military on Wednesday evening. Heavy losses were inflicted at the occupying forces in these encounters.

As per the press release issue by Baloch Republican Army BRA dated 25-March 2021, Balochistan Freedom Fighters group BRA took responsibility on attack on Pakistan Army Check post. One Pakistan Army personnel was killed and 2 were injured in the attack.

Here is the press statement:-

Last evening, our Sarmachars attacked a check post of the occupying Pakistani forces at Salach in Gwarkop area of Kech with sniper rifle and automatic weapons, killing one personnel and injuring two others. After the attack, the forces launched a search operation on the surrounding civilian population, which is still going on.

Such attacks of ours will continue till the establishment of independent Balochistan.

In another press release issued by Baloch Republican Army on 23-March 2021, BRA accepted responsibility for attack on a Pakistan Army checkpost during 23rd March celebrations. However the press release did not mention the number of casualties.

This morning, during the celebrations event held at the hospital by the occupying forces on the occasion of 23rd March in Gadagi Syedabad area of Kilkor, our Fighters attacked a nearby check post with sniper rifles and automatic weapons. The attack inflicted heavy casualties on the forces.

Such attacks of ours will continue till the establishment of independent Balochistan.

Why is the International Mainstream Media (MSM) silent when it comes to the Genocide of Baloch nationals by Islamist Radical Nation Pakistan?

Pakistan cries wolf against other nations on Islamophobia. Ironically Pakistan itself is committing genocide of Baloch, Sindhi, Mohajir, Pashtun, Hazara and Shia Muslims. Why is the MSM not exposing hypocrisy of Islamic Republic of Pakistan?

Why doesn’t the International community realize that for a permanent peace in Indo-Afghan Region and end of Terrorism in the region, Pakistan needs to be divided into smaller Independent free nations that will remove radicalism and terrorism from the region and will bring the everlasting peace in the region.