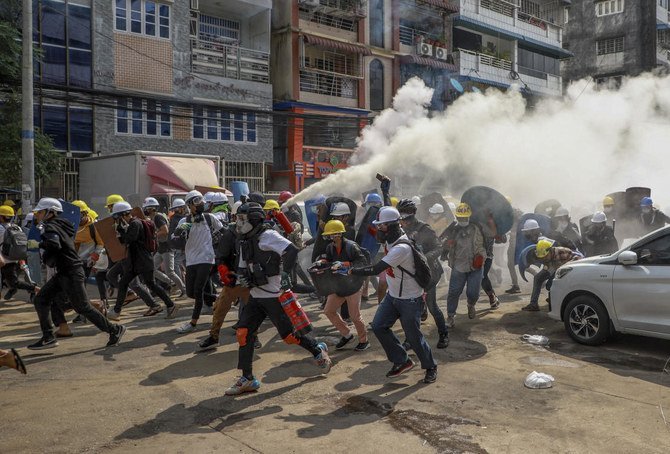 There are two things happening in Myanmar – anti-military protests and anti-terror operations. And a deliberate confusion is created by mixing the both. 114 people are said to have been killed in the military crackdown and the number may be even higher.

But, there is another story at play there. For instance, the information coming from the state of Mizoram in India. The state government of Mizoram (Indian State) is staring at a flood of refugees braving the crackdown. In fact, the state Chief Minister still considers the deposed governemnt as legitimate.

There are protests and there is resistance to Central diktats. The Chief Minister of Indian State Mizoram wrote in a letter to the Indian Central Government, Ministry of Home Affairs has issued advisories to the Chief Secretaries of the North eastern States bordering Myanmar and also to Security forces like Assam Rifles and BSF for taking action to prevent illegal influx from Myanmar into India in the current internal situation there and initiate the deportation processes expeditiously and without delay. This is not acceptable to Mizoram. I understand that there are certain foreign policy issues where India needs to proceed cautiously. However, we cannot ignore this humanitarian crisis.

Clearly, there is something amiss – the remote Chin state in Myanmar, which is not exactly known for supporting any government in Myanmar, why exactly is it protesting that vehemantly against the Myanmarese Government? Are we missing anything?

It looks like we are. There are two events at play here – a Myanmarese Army operation against the Christian and Muslim Terrorist Groups which infest the Western Territories bordering India and protests against the government.

Do we know if both of them are interrelated? As of now, there is no information. But, we know for sure that these military attacks against the Chin terrorist groups is what forces them to flee into Mizoram State in India. Is Mizoram’s Zormathanga and others trying to use the protests against the government to open a floodgate of Chin into India, even if it means it will hurt the terms between India and Myanmar to further their religious agenda? An old tweet on the topic confirms as much.

The reality is that massive fighting is happening with these terrorist groups and massive displacement and casualties are feared.

This comes amidst these terrorirst organizations seeing their brightest spot in their fight against the Myanmarese Army – by trying to turn the people against the army to attain their nefarious ends.

The Arakan Army (AA) is a Rakhine armed group in Myanmar (Burma) based on Kachin State, founded on 10 April 2009. It is the armed wing of the United League of Arakan (ULA), currently led by Major General Twan Mrat Naing. According to Amnesty International, AA has perpetrated violence and abuse against civilians, including abductions and forced labour.

In January 2019, Myanmar’s Anti-Terrorism Central Committee designated Arakan Army as a terrorist group under the country’s counter-terrorism law. However, After the 2021 Myanmar coup d’état, both the military junta and government-in-exile withdrew its designation of the AA as a terrorist group. The decision comes as the army is struggling to contain daily protests against the February 1 coup during which it detained elected leader Aung San Suu Kyi and senior members of the civilian government.