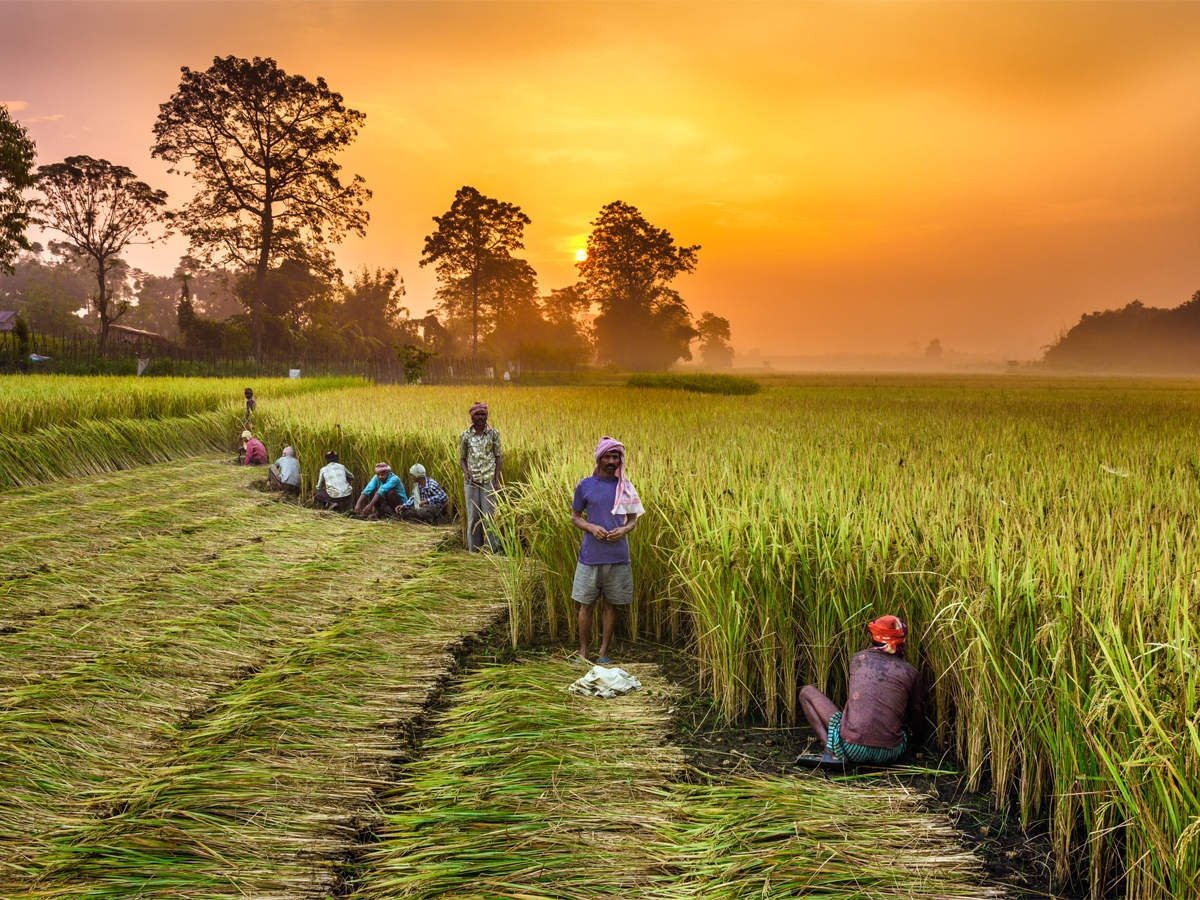 So, now the time has come to demystify the Farm bill 2.  Let me walk you through the bill and the various other references.

Here is the copy of the THE FARMERS (EMPOWERMENT AND PROTECTION) AGREEMENT ON PRICE ASSURANCE AND FARM SERVICES ACT, 2020 that we downloaded from the official Government of India’s website. The above has been referred to as the Act or the Bill for the purpose of this article.


Here is the screenshot (SS1) of the first page of the bill:-

Every bill which has been passed through a proper parliamentary procedure becomes a law. The good thing about them is that they are written on paper with govt seals, signatures from ministerial offices etc. They are drafted on a legal paper hence they become “Laws”.

So, if someone is claiming that there is no assurance, they are not on paper then they need to rethink. These are on green (legal bond) papers with govt seals and signatures.

Now let us go through the bill, look at the screenshot SS2, which has the summary of the bill.

Implying that the bill’s exclusive intention is to benefit the farmers in a transparent way. Any business deal is a deal only when its mutually beneficial. Otherwise, its exploitation at the expense of either party.

The Page 2 of the bill goes into definitions of various terms, which would be later used in the bill.  The screen shot SS3 shows the arms of the definitions. As it was clear from our previous article [“Farmers Bill Demystified Part 1 : Know The Truth About Farm Laws And Don’t Fall in Propaganda”] the APMC continues to stay, the rules of ministry of corporate affairs continue to apply to private companies. The basic definition of the Agreement of contract farming has been shown here.

The screenshot SS4 shows the explanation of the items mentioned in screenshot SS3. So far the bill clearly shows the tilt in favor of the farmers. The Private player has to pay for the services irrespective of the outcome of the farming result. This is harsh on the private player, but they are expected to be model businesses.

Some people expressed concerns about outcome of the event when the farmer fails to produce after the agreement? Won’t he/she be punished?  Short Answer: NO.

Long Answer: May be its time for inefficient farmers to change profession. But I could be wrong, because this is simply my opinion on inefficiency. As a trained scientist for me efficiency is defined by the ratio of output to input.

If you can’t produce results, despite of so many subsidies and laws in your favor, then may be its time to make way for others who can do a good job at producing food. Someone is paying for all these subsidies.  People supporting farmers must not complain about income taxes and other taxes. The govt is providing subsidies from the taxes levied from the working class.

Back to the bill now, see the screenshot SS5 which defines other parts of the bill. The bill is having strong pro-farmer flavors so far.

Read screenshot SS6, even after providing so much leeway for farmers what else do you expect? The govt is making it mandatory for private players to comply with legal requirements. However, so far it seems that the farmers have not been bound into any form of strict legal requirements.

See screenshot SS6 , the share cropper i.e. small farmer who is tilling for a landowner(zamindar) is protected under the bill. There is a provision for review of agreement at intervals.

See screenshot SS6, the Govt. provided guidelines and models for farmer sponsor agreements shall protect the interests of the farmers. Here, there is a real chance for farm unions to provide attorney for the farmers if and when needed.

Screenshot SS7, the farming agreements would be based on mutually acceptable terms and conditions. They are not going to put either party in any kind of jeopardy. One wonders why the protestors are crying foul here?

Screenshot SS7, an agreement is an agreement only when its agreed upon by both parties or all the involved parties. So stop misleading the farmers.

Screenshot SS7, the quality adopted has to be compliant with the agronomic practices, agro-climate and such other factors. Implying, the East India company sahibs are not going to force the farmers to grow indigo.

Screenshot SS7, no private player will force farmers to grow something which may harm the long-term interests of the farmers. That’s exactly what the bill says here, so what is the problem?

Screenshot SS7, the private player for contract farming must provide better seeds, better pesticides and has to adopt practices which enables good labor and social development practices. No ghost here either!

Screenshot SS7, this already happened with ITC agrobusiness in Chirala and some parts of South India. Read the full report released here and here This is a model success story of corporate farming.

Screenshot SS7, the 3rd party verifications and monitoring are the gold standards of maintaining impartial and fair practices.

SS7, ITC Social forestry initiative and how it helped farmers can be seen here. https://www.youtube.com/watch?v=EH-_Lr98tSM

Screenshot SS8 for additional amount over the Guaranteed price(GP)- Bonus, premium and to ensure best value to farmer may be linked up with the prevailing pricing structures of the APMC.

Screenshot SS8, if this is not MSP then no one really can define MSP. In fact GP has more advantages over MSP. The farmer produces what is required instead of tax payer money spent on providing MSP for crops no one wants. We are already growing 3 times more than our maximum requirement. Hence, BBC ran an article about the problem of plenty and how its hurting the farmers in the long run. This point was specifically raised by Prof. Dr. Anand Ranganathan in his talk here:

SS9, APMC defines the farmgate clearly in the previous bill. The Sponsor or private player has to take the delivery of the farm produce within the stipulated time frame.

SS9,Sponsor has to make arrangements to ensure the acceptance of delivery. The entire burden has been placed on the private player.

SS9, further the sponsor has to pay 2/3 in Advance at the time when famer has delivered the produce. Rest of the 1/3 has to be paid before 30 days are over. So how is the farmer at any disadvantage? Infact it’s a burden for the private player.

Screenshot 10 (SS10) contains Section 10 of the Act, is the Exemption from state APMC act for the sale and purchase volume specifically for the contract farming.  The advantages of this clause is quite visible, this is what I would call as a holistic approach to solve a long standing issue which has been keeping the farmers poor.

Screenshot SS11 contains Section 8 of the Act that Nails several lies at once (1) under the pretext of corporate/contract farming No land shall be sold/leased/acquired (2) No structures can be built on farmer’s lands. If built under contract agreement, they have to be removed at the end of the contract. Otherwise the structure belongs to the farmer. How the heck did Ambani Adani would take your lands?

Screenshot SS12 contains section 9 of the that that Nails yet another lie that the enactment of these bills shall make the famers slaves to corporates by the way of debt in case of a crop failure. The govt insurance schemes are applicable to contract farming.

SS12 so are you telling us that the corporates must not be provided any kind of insurance from the Govt along with the farmers? Corporates generate wealth and jobs. The corporates must be given a growth stimulus at regular intervals to keep the economy’s gears oiled up. No thank you to socialism as I donot wish to eat rodent meat, as was the case in South America. So those who are opposing the corporates want to eat rodent meat? Sure be my guest eat those pests, but donot unleash a bubonic plague!

SS13 is screenshot of sections 10, 11 and 12 of the Act. Nothing fancy here, it simply defines 1. Farm service provider 2. Withdrawal from agreements 3. State govt’s roles in farm contract facilitation& registration. SS13’s mutual withdrawal/modification of agreement’s dispute settlement is defined in chapter 3 of the bill.

SS14 is screenshot of Section 13 of the Act. Nothing wrong with the provisions of settlements. The civil disputes are best settled through procedure described below. It also is so in the case of divorce alimony settlements. A memorandum of settlement is a very strong legal document which binds both parties to compliance.

Section 13 of the Act, from personal experience once memorandum of settlement is signed by both parties after mutual agreement, neither of us can back out. In divorce cases the Husband must furnish the amount of the agreement through court. Else he is liable to court case.

Recommended Read : What is Citizenship Amendment Act (CAA) 2019? Why was it required? Why are Jihadist/Western Pseudo-Intellectuals Opposing it?

Screenshot SS15 contains Section 14 that describes the dispute settlement process at the SDM office. This process is same as the one described in the earlier article Here

Screenshot SS16 Critical Clause in the bill: Section 15 says that Notwithstanding sec 14, no recovery can be made in the form of action against the farmer’s land. Implying there is no collateral which rest of us commoners must put forwards with the banks, sponsors etc.

However, they are saying that Ambani would take away your land, but how? I want to be Ambani.

Screenshot SS17 contains section 25 of the Act, clearly MSP of APMC is not applicable to contract farming, it simply makes no sense to have a contract farming bill with APMC MSP. However the coporate sponsor has to comply with Section 5 Guaranteed price. Also Section 9 i.e. govt schemes for farmers is applicable.

As we can see from the above analysis the second farmer bill is actually heavily in the favor of the farmers. I don’t know about Punjab and Haryana farmers, the education level of South Indian farmers is very high. There is a reason why they stayed away from these protests. Except for Communist Party India organized protests which were a flop show. The head count of protestors in south India was less than 50,000 people.

All those Politicians and celebrities both in India and abroad that are inciting and instigating the Farmers should first read the Farm Laws and then take an informed decision. Whether they are being misled into inciting the Farmers in India on the basis of misinformation or whether despite reading the Farm Law in India, they deliberately want to destabilize India and that is the reason they are issuing misleading statements?

It is up to Government of India to prosecute anyone who is trying to instigate riots that can lead to violence even though they are not Indian citizens because due to their instigation, riots take place in India that hurt many innocent people.