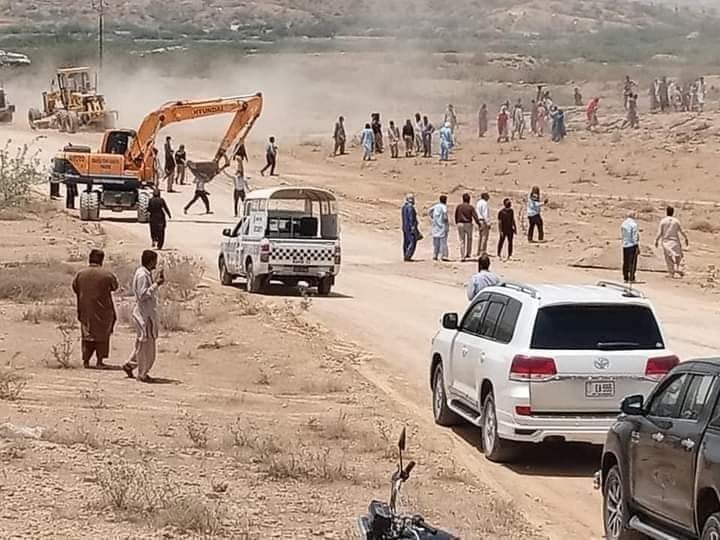 Pakjabi Imperialism is taking place in villages of Kohistan. Pakjabi imperialist Pakistan is forcefully occupying Sindh lands in Villages of Kohistan to merge with Punjab. “Pakjab” is a word referred to Pakistani Punjab. A press release was issued today in Houston, Texas, United States on April 29, 2021 by JSFM central in this regards.

Here is the content of the Press release issued by JSFM Central:-

Original Sindhi’s inhabitants are the owners and heirs of every inch of Sindh, we know very well how to protect our Mother land. We will never allow destruction of villages in Kohistan and exploitation of our resources. Through DHA mega City, Islands mega projects, coastal belt projects, Pakistan army cantonments and other Bahria Mega Projects, Punjabi establishment is in working on the agenda to merge Sindh in greater Punjab plan.

On that occasion, leaders said that we are heirs of every inches of Sindh and we know how to protect the mother land.

JSFM Leaders said that under a conspiracy from Karachi to Kashmor, Bahria Town, DHA City and other mega projects have been initiated on converting the Sindhi people to a minority in the name of Pakistan. The original mastermind is Pakistan Intelligence Agency ISI and all the plans are being made in the General Headquarters (GHQ).

They said that all the conscious and loyal sons and daughters associated with every faction of the Sindhi nation should think seriously against Punjab/Pakjabi imperialism. In the present situation, if the Sindhi people did not organize themselves then no one can prevent them from being annihilated.

On the occasion, the central leaders of JSFM warned to launch a resistance, they condemned the imperialist psyche of Pakistani establishment for forceful occupation over the Dams, Moiadans, Gabol, Kathor and Panhwars villages and mountainous terrain in Kohistan.

There is a saying in Sindhi that the gold earring, that hurts your ears, should not be worn but throwing it away is better to protect ourselves from further injuries. Hence we think that in the name of development those mega projects are dangerous for Sindhi people as because we are afraid to get in minority on our own land Sindh. Warning was given by the JSFM that we would not allow in any way the occupation on our historic homeland in the name of so-called development of Punjab imperialism, nor would the Sindhi nation withdraw from graves of our ancestors who are buried in the mountains of Kohistan cemeteries.

Related Article Sindh Is Not An Orphanage. We Reject All Settlements Of Outsiders In Pakistan Occupied Sindh : Zafar Sahito

JSFM Founder Zafar Sahito said “Controlled Electronic and print media of Pakistan is continuously ignoring secular Sindhi people, they are unfairly treating us which is a crime this must be stopped immediately.”

Speaking on the occasion, the leaders said that JSFM would soon announce a strong struggle for the end of all imperialist conspiracies against Sindh and will work for permanent solution for those problems. Also they appealed world leaders of civilized countries and United Nation for help to save historical secular Sindhi nation.

We already covered in our previous article that Pakistan is selling Bhundar (Bundal) and Dingi Islands in Pakistan Occupied Sindh to China. As per a recent Presidential ordinance and Pakistan Islands Development Authority (PIDA), Pakistan has constituted a body aimed at developing barren islands in the territorial waters of Sindh by China. It is clearly mentioned that this Ordinance can not be challenged in Pakistani Courts.

Pakistan central Government have always tried to take over the coastal belt of Sindh while as per Pakistani constitution, The federal government has no authority to control and establish cities on Sindh’s Island or any other mega projects without permission of Sindhi people or Sindh Government.

People of Sindh are also Angry because Karoonjhar Hills in Sindh are being sold to Chinese Companies. A campaign is launched to “Save Karoonjhar Save Sindh” by locals.

Karoonjhar range is spread on a total area of 02 lac acres stretching till Indian border, with deposits of 20 Billion tons of special kind of granite and Chinese clay, while as per natives, Karoonjhar yields 100 kilogram of gold daily. Hindus in Sindh consider it to be the second holiest place after the Ganges River and many Hindus perform their funeral/cremation rites “Antyesti” at the Karoonjhar springs.

This is not first time. In 2000 and 2006 during regime of Dictator Parvez Musharraf also such attempts were made but Sindhi people strongly condemned these attempts and projects was stopped. In 2019, Pakistani PM Imran khan visited China and finalized few deals with Chinese President Xi Jinping. One deal was about Diamer Bhasha Dam which is now part of CPEC (The people of Sindh have already rejected that project but government of Pakistan is continuously ignoring Sindhi people demands).

There are many Chinees companies already working in Pakistan Occupied Sindh mostly in Port Qasim Authority, Karachi stock exchange, energy sector and buying of Karachi steel mills for which the negotiations are in pipeline.

Pakistan has deprived Sindhis and Mohajirs in Pakistan Occupied Sindh of the basic amenities like drinking water. As we covered in our previous article, by constructing the Bhasha Dam, Pakistan will turn Occupied Sindh into a desert land. People are suffering with poverty and do not have money to buy even the bread. Whose purpose will the development of high rise cities on the islands serve?

How long Sindhis will let their lands and resources to be plundered by Imperialist Pakjabi Pakistan?

Will Pakjabi Pakistan understand the language of Soft resistance?