Contrary to Appeal From Group of Psychiatrists, Media Spread More Panic in Public 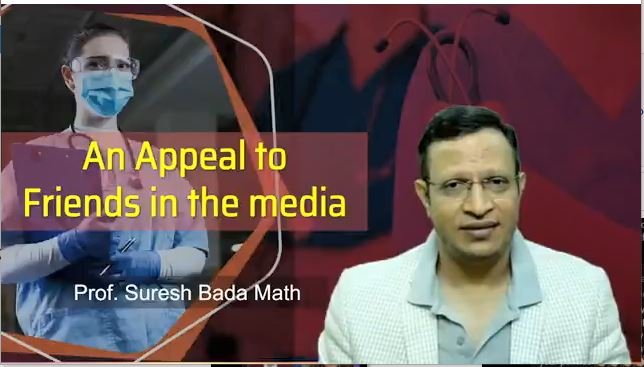 Recently we received a video where in Dr. Suresh Bada Math Professor of Psychiatry working at NIMHANS Bangalore, India talked about a group of Psychiatrists who wrote an open letter to friends in Media titled “An Appeal to friends in the Media”. However Contrary to appeal from group of eminent Psychiatrists, Media spread more panic in public.

He talked about the media using gory images of dead bodies burning in cremation grounds, relatives of the deceased wailing inconsolably, emotional outbursts and hysterical reports with cameramen swarming over the bereaved who are going through deeply emotional moments. He said that such coverage is creating panic in the public and panic is spreading faster than the Chinese Corona Virus itself.

It is the same thing NewsComWorld.com has been saying from the very beginning that the Indian Media Cabal Along With Western Propaganda Outlets Conspire To Spread Panic in India

Group of Psychiatrists wrote the open letter to Media on 28th April 2021. However it seems media did not heed to the appeal from the respected medical professionals and continued or we can say accelerated their vicious propaganda to create more panic in the public.

Here are the contents of the open letter which we suggest that every person should read:-

As professionals working in mental health related domains, we felt compelled to write an open letter to everyone, especially our friends in the media, on the events of the past few weeks.

With great power comes great responsibility, it is said,. In an unprecedented crisis such as COVID-19 pandemic, responsibility acquires even greater importance.

Mass media has the power to communicate to millions at the same time. When the reach is so huge, every word, every image and every nuance matters. However, what we are seeing on our TV screens, mobile screens and newspapers is disconcerting, to put it very mildly.

Images of bodies burning in cremation grounds, relatives of the deceased wailing inconsolably, emotional outbursts and hysterical reports with cameramen swarming over the bereaved who are going through deeply emotional moments – these may help garner eyeballs. But there is a steep price to be paid for such coverage.

Related Article Trapped In Her Own Lies: The Sad Plight Of An Indian Media vlogger Who Tried To Use Her Father’s Death To Further Her Agenda

As it is, due to the pandemic-related restrictions and guidelines, people are unable to go out and live a normal, social life. This is already fostering a hidden mental halt epidemic with people becoming depressed, lonely and anxious. Stuck at home, people tune to the televisions or social media even more than earlier. But when they see such disturbing and depressing visuals, they are pushed much deeper into the abyss.

We are sure that reporting on sensitive issues especially during this time of difficulty is not easy, even for journalists. If the news you are reporting affects you so much then imagine the impact it has on the people who are watching.

Imagine someone has just tested positive for COVID-19. If they have witnessed the panic-inducing coverage from cremation grounds, it keeps weighing on their minds and that of their loved ones. The fact that a huge number of people who are infected by COVID-19 recover becomes immaterial. Only images and emotions stay with them.

There are many people with mild or moderate COVID-19 who may be recovering at home. Will a positive frame of mind help them recover better or will an atmosphere of hopelessness do so? This is a matter for our friends in the media to reflect upon.

Yet again, we are not saying that facts should not be reported. We are saying that hysteria and panic-inducing coverage should be avoided.

Related Article Smear Campaign Against Modi A Tactical Deflection From Italy And Others : COVID Misery Fetish

Apart from harming people’s mental health, such reportage also has other consequences.

Reporting a shortage of one particular commodity is the right thig to do so that action can be taken. But it also needs to be specified where exactly the shortage is, rather than make it look like a universal shortage. Because human psychology is such that, the more noise people hear about shortages, the more they will run after that commodity and try to hoard it. This creates a vicious cycle of more shortages or people panicking because they are unable to get things they may not even need!

As mental health professionals, we can tell you that specific information empowers people and prepares them to face any challenge. But panic weakens them.

When are certain medicines needed? When do patients need to look for oxygen? When should they go to a hospital? What percentage of people recover from COVID-19 just while being at home? Are there organizations working to help people even at such times? Are there hopeful stories of human triumph? How can people seek help in times of an emergency? Many of these things may not be clear to most common people even after watching hours of news. Perhaps these aspects can be emphasized upon prominently.

Remember, that none knows about the exact mental health situation of every person who’s watching you or reading you. There’s no way to say which image or which word can be the last straw for someone, causing grievous damage to their mental health. Therefore, responsibility matters.

In such times, the media has great power to inform, educate an most importantly, infuse hope in the people. This includes the sharing of authentic information and allaying of fears. These are extremely important weapons in the fight against the pandemic.

Therefore, we request our friends in the media to show restraint in their coverage without compromising upon facts or public interest.

You are our eye and ears. You matter. What you say, show or write matters. You are important partners along with frontline workers both in the healing process and in providing hope, as well as support for those in grief.

Here is the transcript of the video:-

My dear friends today i am discussing a serious matter and it is titled as “An Appeal to friends in the Media” I am Dr. Suresh Bada Math Professor of Psychiatry working at NIMHANS Bangalore. This video is based upon an appeal by my teachers to the friends in the Media. My Teachers are Professor B N Gangadhar, Ex-Director NIMHANS, Professor Pratima Murthy Head of Dept of Psychiatry NIMHANS Bangalore, Dr Gautam Saha, the President Indian Psychiatric Society, Professor Rajesh Sagar Professor of Psychiatry AIIMS, New Delhi. They have written a letter to the media people. Of course media is the fourth pillar of our Democracy, you need to show the truth. But at the same time you have a responsibility to instill hope. But recently the media is only showing the death, cremation and people crying.

Yes the media has a huge power. This power comes with great responsibility. You have a responsibility towards the general population. You should not create panic. Because of this panic, even any general population, any person who has soar throat or cough is running towards the hospital. He is trying to buy Remdesivir, he is trying to buy oxygen cylinders. He is trying to block the hospital beds. One of the best examples is my friend who is a journalist. 2 days back his father was diagnosed as COVID Positive. Of course he is 70 years. But his Oxygen saturation is 96. My friend who is a journalist who is a learned person but he is making frantic calls towards all hospitals to block the beds. He wants his father the best treatment. He has already blocked 2 beds in 2 hospitals. He is ready to pay any price. When i spoke to him that he can be managed at home, he said can’t you see the television channels people are dying. When it tried to educate him, he being a journalist, he said, “I can’t take the risk.” See this is the journalist is getting affected. Imagine the general population. By seeing the same repetitive images cremation, burial and also people dying, ICU videos, it is not helping anyone. Of course you need to report truth. Lets report the truth with good statistics. 90% of them can be treated at home. That can depicted very easily. Only few require hospitalization. And hardly around 2-3% require ICU. That needs to be emphasized n number of times, not the burial ground or the cremation ground. My dear media friends this panic is spreading more fast than the COVID itself. Because of this fear, many of our patients, many of our general population, they are becoming highly anxious or else they are even attempting suicide. Please we request you to kindly restrain yourself. Show the truth without glorifying. So my dear friends, you have a huge responsibility. There are tough times to come. We need to act together. Please talk to the people who have recovered. Please increase the resilience, fasten the resilience in our population, Please infuse hope in our general population. You have that great power. Please do it. Thank you very much for giving your valuable time. Stay Safe.

Since this appeal was made by the respected group of Psychiatrists who wrote the open letter to Media on 28th April 2021, media did not heed to the appeal from the respected medical professionals and continued or we can say accelerated their vicious propaganda to create more panic in the public. Shouldn’t the Government issue guidelines on reporting and impose punitive actions in case those guidelines in reporting are breached?

Remember the insensitive reporting by Indian Media during Nepal Earthquake? Whole Nepalese public said a lot of negative things about the Indian public. Remember one instance where the house of a victim had faller and all his family members had died under the rubble and the Indian journalist asked him, “How do you feel?” Such kind of insensitiveness is seen not only from Indian media but also from their wester propaganda outlets like CNN, Washington Post, New York Times, Times, BBC and what not. Isn’t this coordinated negative reporting is scripted to deliberately spread panic in Indian public?