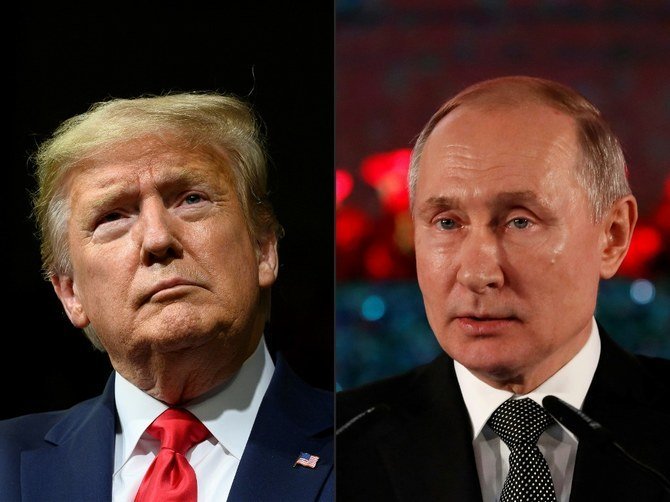 The presidents “thoroughly considered” various arms control issues “given the special responsibility of Russia and the U.S. for maintaining international peace and security,” the Kremlin said.

The talks revolved around strategic stability issues, the Kremlin press service said Thursday, and the two leaders agreed to continue negotiations on the crucial New START treaty. The major arms control deal is set to expire next year and its future remains uncertain. Trump has expressed hopes that the US, Russia and China will avoid an “expensive” three-way arms race, a statement from the White House has said.

“President Trump reiterated his hope of avoiding an expensive three-way arms race between China, Russia and the United States and looked forward to progress on upcoming arms control negotiations in Vienna,” it said.

The only remaining U.S.-Russia arms control pact expires in February 2021. If it is not extended, the world will be without legal restrictions on American and Russian nuclear weapons for the first time in nearly half a century.

The presidents then discussed the Iranian nuclear program, agreeing the regional stability must be preserved with a collective effort. President Trump pulled the U.S. out of a 2015 nuclear pact two years ago, and Iran has been violating the terms of the accord to pressure the remaining signatories to offset U.S. economic sanctions.

The two leaders in particular discussed economic cooperation and efforts to “reopen” the global economy during the times of the Covid-19 pandemic. Trump and Putin agreed the US-Russia cooperation in fighting the pandemic has been “positive,” the Kremlin press service said.

Reading the two statements one couldn’t help but notice that the phone talks were focused on cooperation. Trump and Putin even remembered the 45th anniversary of a joint Soviet-US Soyuz-Apollo space mission.

Some people call this Trump charisma of doing thing unexpected. If you remember, President Trump visited North Korea unexpected and ended the imminent threat of war that time by holding talks with North Korea. As per people if a simply phone call can solve many issues, it is worth it.

Some people call it a great move by President Trump and only a great leader has the courage to turn foes into friends. If US and Russia can end hostilities, it will be positive for the world that is trying to recover in the aftermath of the Bio-Terrorism of China that spread Chinese Coronavirus in the entire world.

Meanwhile, Trump’s Democratic rival Joe Biden has lately invoked the well-worn tune of the “Russian interference” as part of his presidential campaign message, saying he was “putting the Kremlin and other foreign governments on notice” that – if elected in November – he will “treat foreign interference in our election as an adversarial act.”

Trump last spoke to Putin in early June about plans for this year’s Group of 7 (G-7) summit set to take place in the U.S. Trump has called for Russia to be invited to the summit, though other G-7 leaders have rejected the idea.

U.S. and Russian officials held arms control talks in Vienna in June on a proposed trilateral treaty involving the new two nations and China, though Beijing has thus far rejected calls to join the negotiations. The Trump administration is pushing for a new agreement to replace the New START Treaty, which is set to expire in February.

Trump postponed the meeting until at least September due to the coronavirus, and it remains uncertain what shape it will ultimately take.

If the vested interests an stop igniting fire between the US and Russia, can the Unity of these two powerful countries not skew the power equation against China in favor of the US led by President Trump?

If Russia can stop giving arms to China, will it not hamper China’s belligerent attitude to invade the entire world?

If the hostilities between Russia and US + NATO allies can end on some compromise, will it not free up military resources from Europe and can be deployed more effectively in Indo-Pacific region to contain the Chinese Lizard?