China Bribes Vatican With “$2 Billion a year” to silence the Church. 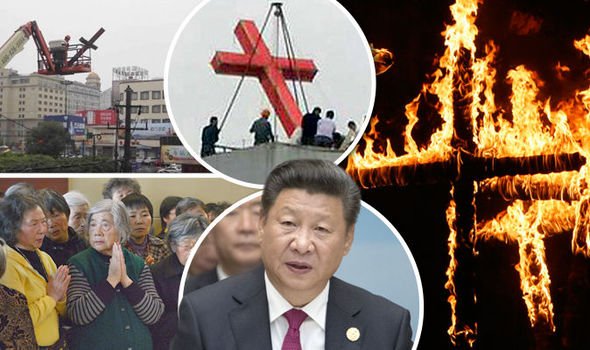 China Bribes Vatican With $2 Billion a year to silence and influence the Church. This expose came from the exiled Chinese dissident Guo Wengui who exposed Chinese CCP in a June 20th interview on The War Room, an American podcast hosted by an ex-Trump adviser, Steve Bannon.

Exiled Chinese dissident Guo Wengui in an expose said that the Chinese Communist Party (CCP) is allocating $2 billion a year to pay off the Vatican to prevent it from criticizing Beijing’s sweeping clampdown on religions.

The billionaire’s comment comes after China faced widespread criticism over its crackdown on the country’s religious groups, particularly the ethnic Uighurs and other Muslims.

In a June 20th interview on The War Room, an American podcast hosted by an ex-Trump adviser, Steve Bannon, Mr. Guo said the CCP earmarks massive sums each year to win the allegiance of foreign countries including the Vatican, Italy, and Australia. Among them, the Vatican receives up to 2 billion dollars from the Chinese Communist Party every year, he said.

“The Chinese Communist Party allocates 2 billion US dollars each year” to gain influence over the Vatican’s internal policy making and to pay for its silence on the CCP’s repression of religious freedom, said the controversial billionaire whistle blower.

Fugitive tycoon Guo Wengui claimed in a podcast that the Communist Party had been paying the Holy See generously since 2014 because Beijing ‘wanted the Vatican to shut up about China‘s religion policies.’

‘[They] want Vatican to shut up and follow the CCP about the religion polices,’ Guo said on the radio show. ‘That is disaster.’

The Chinese dissident also claimed that the Chinese government was paying the Holy See with $100 million (£80 million) before 2014, without specifying when those payments initially started.

‘CCP knows, if the Vatican tells the truth about Chinese Christians and Catholics, CCP is die,’ Guo said.

Guo has previously stated that :

China has drafted a complete strategy for world domination known by the initials “BGY,” which stands for Blue (control the Internet), Gold (buy influence with money), and Yellow (seduce key people with sex).

Since 2014, the CCP has formulated internal policies to invest a certain percentage of trade with foreign countries in the BGY program to erode the local state system, Guo said Saturday, and the current BGY quota for the United States is 5%.

According to data from the U.S. Trade Office, the total trade volume between China and the U.S. in 2018 was $7.37 trillion. If calculated according to 5%, the amount used for BGY in the United States would then be about $36.8 billion, Guo said.

“The trade volume between the CCP and Australia is about US $200 billion,” he said. “Previously, 1 percent was used for BGY, but it rose to 5 percent. That is, $10 billion was used for BGY.”

According to Guo, these huge amounts of BGY funds are employed for a variety of uses, including bribing local officials, regulating media messaging, and controlling local resources.

A 2019 report released by the International Cyber Policy Centre at the Australian Strategic Policy Institute revealed hundreds of Twitter accounts linked to the state-backed effort to denigrate pro-democracy protests in Hong Kong had formerly been used to target critics of the Chinese government, principally Guo Wengui.

The accounts were part of a coordinated information campaign operating for more than two years to target Mr. Guo as well as jailed publisher Gui Minhai.

“Those early efforts are an attempt to shape sentiment and the international narrative around these prominent critics of the Chinese government and to shape them in such a way as to influence the Chinese diaspora’s perception of these individuals,” said Jake Wallis, one of the report’s chief authors.

For its part, the Vatican has been carrying on a charm offensive with the CCP for several years, and in September 2018 signed an important secret accord with Beijing…

China has crackdown on Christianity as the ruling Communist party continues to intensify its control over religious freedom in the country.

Churches were raided and demolished, Bibles and holy books were confiscated and new laws were established to monitor religious activities in the country’s province of Henan, which has one of the largest Christian populations in China.

The crosses are said to often be replaced with objects such as the Chinese flag and photos of Chinese President Xi Jinping and former Communist Party leader Mao Zedong. Christian residents of a rural township in south-east Jiangxi province were persuaded to replace posters of the cross and Jesus Christ inside their homes with portraits of Xi, a local official said.

‘Xi is a closet Maoist – he is very anxious about thought control,’ said Willy Lam, a Chinese politics expert at the Chinese University of Hong Kong. ‘He definitely does not want people to be faithful members of the church, because then people would profess their allegiance to the church rather than to the party, or more exactly, to Xi himself.’

Under President Xi Jinping, China’s most powerful leader since Mao Zedong, believers are seeing their freedoms shrink dramatically even as the country undergoes a religious revival.

Experts and activists say that as Xi consolidates his power, he is waging the most severe systematic suppression of Christianity in the country since religious freedom was written into the Chinese constitution in 1982.

The crackdown on Christianity is part of a broader push by Xi to ‘Sinicise’ all the nation’s religions by infusing them with ‘Chinese characteristics’ such as loyalty to the Communist Party. Over the last several months, local governments across the country have shut down hundreds of private Christian ‘house churches’. A statement last week from 47 in Beijing alone said they had faced ‘unprecedented’ harassment since February. A

After this expose that China bribes Vatican, shouldn’t each neighboring country of China including Nepal, Pakistan, Bangladesh, Myanmar, India, Vietnam, Philippines investigate how much Chinese “BGY” which stands for Blue (control the Internet), Gold (buy influence with money), and Yellow (seduce key people with sex) has created traitors in their countries that follow dictates from China?

Should this be limited to immediate neighbors of China? Or should people in African Continent, Middle east, Europe also introspect and investigate the Chinese bribery and attempts to overtake their countries and strategic assets?

China wants to rule over the entire world. They will follow all sort of policies to win the influence as mentioned above. But are their nationalist government or people in these countries who can expose those Anti-Nationals and sold out politicians or influential people of receiving bribery/favors from Communist CCP?

What is the Remedy if Vatican itself is bribed and is silent over the atrocities on Christians in China? Doesn’t it shake the faith of Billions other Chinese around the world on Vatican? Is the downfall of Vatican itself not responsible for creating non-believers like Antifa Terrorists, Democrats, Leftists, Liberals around the world? Will this not lead to more and more people giving up Christianity and becoming Atheists, Muslims or adopting other peaceful religions?

Will the Leftist/Liberal Media and the Politicians around the world ever speak up against their pay masters China?

Related Article Racism Against Africans: Ugly Side of Chinese Hypocrisy