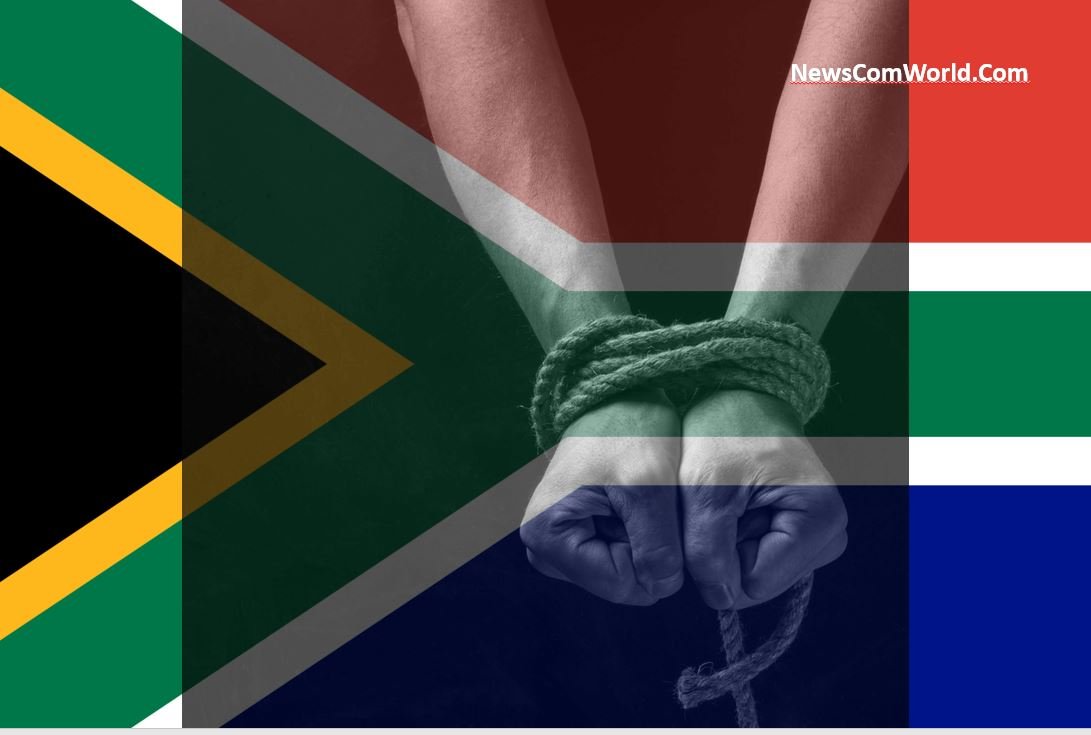 South Africa has become an epicenter of Kidnapping and ransom, the culprits behind these Pakistani Syndicates is the Pakistan Intelligence Agency ISI and its staff at High Commission of Pakistan, an official delegation by the FATF Grey Listed, terrorist producing country Pakistan.

Supply of drugs, kidnapping, human trafficking, and killing of businessmen in near past has been the responsibilities of Jehaidi element networks of Pakistan high commission military attache that comprise 70% of the crimes in South Africa.

Recently Javed Jelani, a Karachi based Businessman, was kidnapped by the same group of people. This news was widely spread like a wildfire and MQM workers responded seriously to this incident and many intelligence agencies around the world were contacted by MQMs South Africa. Responsible FBI and HAWKS assured their cooperation to pursue the incident, they jointly raided different parts and cities of South Africa in search of the hostage MQM workers, South African Secret Agencies, the American FBI and the South African Muslim community extended their complete support and finally recovered the victim from an area in Johannesburg.

The South African Community expressed their gratitude for the MQM workers’ effort in helping the South African Crime Branch and other foreign agencies with their fearless courage in recovering Javed Jelani.

Crime rates are historically high in South Africa but traditional kidnap for ransom cases have been uncommon. The majority of abduction cases have previously involved children and were largely concentrated in lower-income communities. Yet, since 2016, there have been numerous reports of kidnappings targeting middle to upper-income businesspersons. Initially, kidnapping syndicates, with reported links to Mozambique, Pakistan and Bangladesh, targeted wealthy foreign business people travelling to or resident in the country. The victims were typically foreign nationals of Asian and African descent or were local residents of Asian origin. However, this profile has now broadened with the number of cases have increased per month.

Kidnapping incidents involving businesspersons are typically criminally motivated. Perpetrators have demonstrated ties to wider international syndicates in addition to smaller, less sophisticated operations. Ransom demands often amount to between ZAR 12.4 million and ZAR 74.7 million (USD 1 million and USD 6 million); however, these demands can be negotiated downwards as ransom payments typically average between ZAR 100,000 and ZAR 200,000 (USD 8,000 and USD 16,000). In April-2018, for example, a polish national, identified as Barbara Wadolowska, was kidnapped outside a prominent hotel in Sandton, Johannesburg. Her kidnappers demanded a ransom of approximately ZAR 29 million (USD 2.3 million) for her release. Wadolowska was released three days later near Johannesburg’s O.R. Tambo International Airport after a portion of the ransom was paid. Similar cases have been reported in Pretoria, Durban and Cape Town.

Overall, kidnappings are more prominent in the Western Cape and Kwa-Zulu Natal (KZN) provinces; however, it is clear the crime is growing in Gauteng. In a concerning incident in April-2018, Pakistan national and head of an alleged kidnapping syndicate, Majeed ‘Manjla’ Khan, was reportedly assassinated in central Johannesburg in an attack attributed to an alleged turf war between two rival kidnapping syndicates in the city. Such targeted violence demonstrates the growing competition between gangs within this lucrative criminal sector. Furthermore, the large rewards available through kidnappings are likely to attract other already-established criminal gangs operating in South Africa to conduct their own targeted attacks.

Members of the Pakistani community, many of whom feared giving their names, claimed that the gang had been operating since the late 1990s when the first wave of immigrants arrived.

A syndicate comprising thugs who are Pakistani nationals backed by Pakistan Intelligene Ageny ISI, Pakistan High Commission official Staff, the underworld and bank informers meticulously scrutinise the financial affairs of some prominent businessmen before kidnapping them.

Mike Bolhuis, a specialist investigator into serious, violent and economic crimes, made this comment in the wake of the alleged kidnapping of city businessman Noor Karriem, the owner of Giant Hyper in Epping, last year.

“We have investigated several cases since this trend emerged about three years ago. We know of one case where the ransom was paid to the syndicate in Dubai.

“Our investigation into such kidnappings revealed it is two-pronged.

“The one scenario is where wealthy businessmen’s financial accounts are monitored by the syndicate and if they notice that a businessman doesn’t declare taxes then they will target him.

The person is then kidnapped and left with no alternative but to pay or threatened to expose his alleged money laundering.”

Bolhuis added the other scenario is where the kidnapping is allegedly staged by the victim and family to get the money illegally out of the country instead of declaring it to the SA Revenue Service.

He added that kidnapped Indian and Pakistani people seldom register a case because of threats that a family member would be killed.

Yusuf Abramjee, South Africa’s unofficial crime-fighter, said: “The kidnappers nowadays demand the ransom to be paid in Dubai in US dollars. So far police have been unable to make any breakthroughs.

“These kidnappings are well planned and I’m of the view that they have inside information on their targets. I have sent a letter to the police minister requesting urgent intervention and to seek help of international law authorities to brake the backbone of this international syndicate.”

A police source said that three weeks ago a businessman of Bedfordview in Gauteng was kidnapped and that the kidnappers demanded a $1million (R15m) ransom. He and a Durban woman were still missing, the officer said and that kidnappers were prepared to play a waiting game.

Another crime-fighter said that the syndicate comprising Pakistani nationals also targets its countrymen who left their country. He further claims militias from Africa are part of the syndicates, the underworld are the middlemen and that some police officers are in cahoots with the kidnappers.

According to him, the role of the underworld is to make sure, with the help of corrupt police officers, that investigators don’t get to the bottom of the kidnapping.

Repeated requests to South African authorities to provide security cover to Freedom Fighters have failed to get effective action against Pakistani Kidnapping and Criminal syndicates that are supported by Pakistan Intelligence Agency ISI with active support of Pakistan High Commission in South Africa.

“They used to just walk in to a business and say: ‘Give us R500,’ and we could do nothing,” said a Pakistani businessman. “If they thought your family had money they would kidnap you. But we began standing up to them as more Pakistanis arrived in South Africa and it looks now as if they are going after the Bangladeshis.”

An Indian businessman Mosein Patel was found tied to a bed on the South Coast, 22 days after he had been reported missing. Seven suspects were arrested.

Solaiman Rahaman, 41, from Bangladesh, who was kidnapped, was dumped by his captors near the Sibaya Casino.

The gang, which has members in Johannesburg and Cape Town, is also said to operate from Mozambique, where members hide out if things get too hot in South Africa.

According to a police source, the Pakistani mafia controls much of the heroin trade coming into South Africa from Afghanistan, as well as the manufacturing of mandrax and pirating of films.

However the foot soldiers in South Africa specialise in extortion and kidnapping for ransom. According to police crime statistics, there was a 7.7 percent increase in kidnappings countrywide last year. KZN had a 7.8 percent increase.

It is unclear how many of these kidnappings were for ransom, but Dr Rudolph Zinn, a former policeman now at the University of South Africa’s criminology department, said the spike could be attributed to organised crime.

“The perpetrators of these crimes are very clued up with the terrain and rely on the fact that their targets may not know their rights and what legislation is in place to protect them,” he said.

“Sometimes the perpetrators take advantage of the fact that their victims may be in the country illegally or that they brought more money into the country than they were supposed to have.”

Shaheen Suleiman, of Magma Private Investigations, who was instrumental in finding two kidnap victims recently, said that at least three Pakistani gangs were operating in KZN.

He said many cases were not reported to the police.

The gangs operated international bank accounts where the ransom money was deposited.

“They are also known to go into some businesses and demand protection money every week. They watch new immigrants quite closely.”

Police spokesman, Colonel Vincent Mdunge, said they were continuing their investigations and more arrests would follow.

“This gang operates like wild dogs. They pounce on unsuspecting business owners, mainly foreign nationals. It is clear we are faced with a group of organised criminals,” Mdunge said.

Fayyaz Khan, president of the Pakistan Association of South Africa, said they were working closely with the police to end the gang’s reign of terror. “They are not a refection of the Pakistani community but are miscreants who are giving us a bad name.”

Pakistan is on the verge of bankruptcy. There is a freedom movement in Balochistan, Sindhudesh, Pashtunistan and they want independence from Punjabi Pakistan. As a result the task of Pakistan Intelligence Agency ISI has incrased manifold to curb the resistance in these regions. The resistance leaders and activists that are sitting in foreign countries are also at risk. Pakistan Intelligence Agency ISI does not respect the sovereignty of South Africa or other countries where they operate with imputinity. Hence to suppress the voices of freedom, Pakistan uses these Pakistani criminal kidnapping and drug syndicates to carry out their dirty work of kidnappings and assassinations. In that process the part of the ransom received goes to funding the ISI activities in South Africa and neighboring countries.

As per sources, the Pakistani Kidnapping and drug syndicates in South Africa enjoy the support of Pakistan Intelligence Agency ISI whose officials are part of the official staff working in Pakistan High Commission that facilitate the continuous supply of drugs via Pakistan and equip the syndicates with the intelligence about the targets and their estate net worth. Some of the targets that are freedom activists from Sindhudesh, Balochistan or Pashtunistan are kidnapped, threatened, intimidated and even killed if they do not follow the instructions of Pakistan Intelligence Agency ISI. However some Kidnappings are purely for ransom. The intelligence about the worth of the estate of the victims are provided by Pakistan Intelligence Ageny ISI that takes a cut in the ransom money and the Pakistani officers are able to buy expensive real estate in South Africa using the blood money.

Only way to fight the crime is to blacklist Pakistan and take the crime report against Pakistani Kidnapping and Drug gangs seriously and place surveillance on Pakistan High Commission officials.