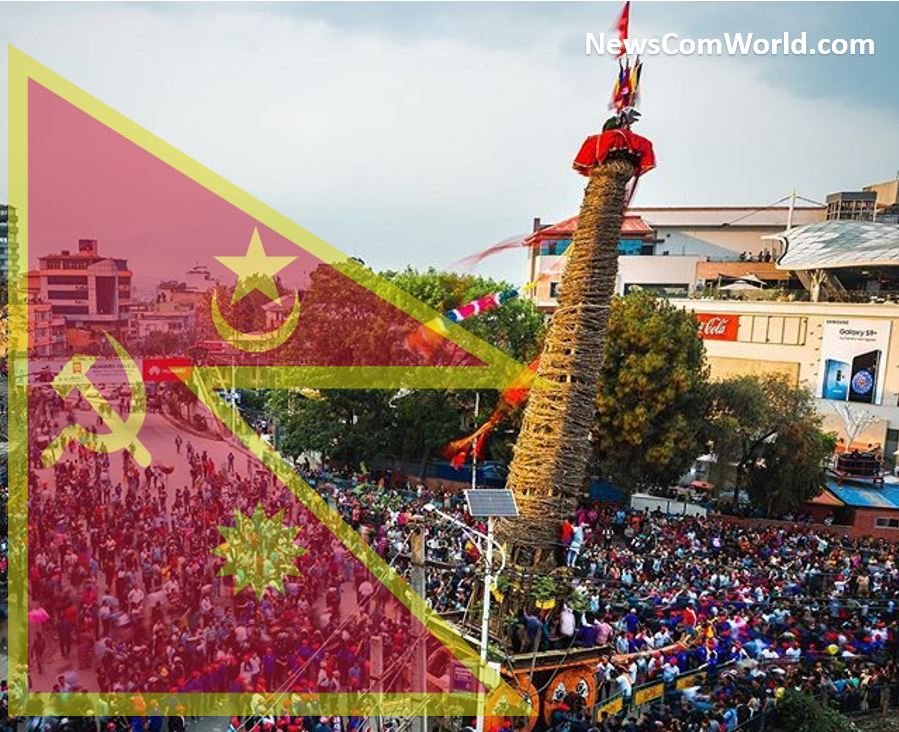 Police in Nepal used tear gas and water cannon to break up a religious rally that defied a government ban on public gatherings imposed to stop the flow of the coronavirus.

Despite the ban, some 2,000 residents poured into a major thoroughfare of Lalitpur, near Nepal’s capital Kathmandu, on Thursday to pull a chariot of the rain God, Rato Machhindranath, a ritual that has been celebrated for generations.

Temporary curbs were imposed in Kathmandu and surrounding areas in August to help contain coronavirus contagion and residents were asked to observe festivals at home.

Witnesses said the demonstrators, wearing protective face masks against the virus, threw rocks at baton-wielding police and set a police motorcycle on fire.

An injured person was carried away by police, they said.

Machhindranāth or Mastyendra Nath is revered as the giver of rain. The name Rato Machhendranath means Red Machhendranath in a reference to the color of the deity’s image. The chariot festival is held according to the lunar calendar, so the date is changeable. It begins on the 4th day of the bright fortnight of Bachhalā, the seventh month in the lunar Nepal Sambat calendar.

The erstwhile royal family of Nepal are Gorkhas who trace their origin to Guru Gorakshanath or Gorakhnath, the founder of the Nath monastic movement in the Himalayan belt.

The story goes like this. Once upon a time, there was no rain in Nepal and there severe droughts for 12 years. It is believed that time that Guru Gorakhnath (Gorakshnath) was doing his meditation in a village in Nepal. Due to some issues, Gorakhnath (Gorakshnath) had put the snakes (snakes were believed to bring rains) under his seat on which he was meditating. Wise men advised the then Nepal King to make Guru Gorakhnath step down from his seat on which he was meditating. The reason given was that Gorakhnath once gets off his seat, the snakes will be released and that will bring rains in Nepal.

Nepal King brought a procession of Mahayogi Mastyendra Nath who was the Guru of Maha Yogi Gorakhnath. Out of respect Gorakhnath got up to visit his guru Machhindranath from his meditation seat and that released the snakes under his seat and it started raining in Nepal.

In remembrance of this, Machhindranath’s procession has been celebrated with grandeur every year. The people of Patan believe that the impact of the pilgrimage will ease any difficult situation. As the king of Bhaktapur and the guru of Kathmandu helped to bring Machhindranath to the valley, the people of Bhaktapur and Kathmandu also come and pull the chariot during the chariot journey. The people of Lalitpur are responsible for pulling the chariot from Sundhara to Lagankhel. They pull chariots in the name of farmer Lalit.

Since that day, Rato Machindranath Jatra that is a chariot procession honoring the Hindu Maha-Yogi Machhindranāth or Mastyendra Nath is held in Lalitpur, Nepal. It is one of the greatest religious events in the city and the longest chariot festival celebrated in the country.

Maha Yogi Gorakhnath is revered by Hindus in Nepal as their Deity. Symbols of Yogi Gorakhnath are still found on every Nepali Currency Note and coin. As per the stories, Maha Yogi Gorakshnath had given a Boon to the then Nepal King that as long as his name/symbols remain on Nepal Currency, Nepal kingdom will be there.

However the Communist Government is bent on destroying Nepal and making it slave of China. First attack on Nepali tradition is to take off the symbols of Gorakhnath from the new Nepali coins. That day is not far when this symbol will be removed from Currency notes also. As per the stories, that situation can be compared when Nepal becomes a full colony of Communist Godless China.

Nepal’s King Birendra, who was assassinated along with other family members in 2001 by his own son, was a symbol of tradition for this Mutt and for many years he launched Makar Sankranti festival in Nepal by visiting the Mutt.

Birendra looked up to Mahant Avaidyanath (mentor of Adityanath), former religious and temporal head of the Gorakhnath monastery, as his guru. In 1992, King Birendra himself drove down from Kathmandu to the Gorakhpur Mutt.

It was understood that King Birendra decided on the ‘continuation of the Hindu state, the Hindu king and a ban on cow slaughter’ when Nepal’s constitution was amended in 1990 on the advice of Avaidyanath.

Avaidyanath counselled many members of the royal family and was never fully convinced that Birendra and his family members were assassinated by the king’s son. Avaidyanath was succeeded by Adityanath in 2014 as the head of the Mutt.

However since the assassination of Nepal’s Hindu King Birendra under a Communist Conspirasy, Nepal has gone down and doing everything possible to destroy Hinduism and Hindu Beliefs on lines of what China is doing with Buddhishts, Uyghurs, Christians and Hindus in China.

Here are some images of protests reported by Communist China Mouthpiece from an article titled Nepalese protesters oppose US-backed project out of national interest concerns where the protests by Nepalese Communist Party was done against the US investment in Communist Nepal on 19-June-2020. These protests were instigated by China.

As per the Chinese Mouth piece article, “”There were many protests in Kathmandu against MCC. Even during the lockdown period, people came to the streets and protested saying that the MCC is totally against the sovereignty,” Shristi Kafle, a Kathmandu-based journalist, told the Global Times.”

Another instance of protests in Nepal. If you remember Nepalese Communist Government objected to India laying a road connecting the Lipulekh pass in Uttarakhand, India at the behest of China and raised a fictitious Disputes over a 40 KM land with India. Communist Nepal Parliament recently approved a new map at behest of China, that includes parts of India. It was raised to hype pubic opinion against India and divert public anger to India instead of China. We covered it in details in our previous article Nepal Surrenders Mt Everest to China And Disputes 40 KM Land With India

There were protests in Nepal organized by Communist Nepal Government at instigation of China. Here are some tweets with images of such protests

Point we are trying to make here is that when the protests are in favor of China or Communist Government of Nepal, it is ok to allow large gatherings on the streets. However when it comes to celebrating a 1000 years old Hindu Festival, Communist Nepal on the lines of Communist China cracks down on the Hindus to prevent them from celebrating their religious festival.

When it comes to religious gatherings of Muslims, there is never a fuss. But when it comes to destroying the Hindu religion, Communist Nepal on lines of Communist China is at the forefront.

In our previous article Anti-Hindu Riots in New Delhi were Planned in Nepal, we mentioned about Nepal “Muslim Aalmi Tablighi Ijtema” 2020 held between 15 to 17 February 2020 in Saptari District of Nepal. Anti-Hindu Riots in New Delhi during President Trump Visit were Planned in Nepal during this religious congregation. Around 5 lakh Muslims gathered in this Ijtema, mostly from UP and Delhi. This event was inaugurated by Hazrat Maulana Shah who is from Delhi.

This was the starting point for spread of Chinese Corona Virus in Indian Subcontinent as the participants came from countries including Malaysia, Thailand, Bangladesh, Pakistan, India. However since Muslims are only a small fraction of Nepal Population, Nepal is not crushing Islam on the lines of Communist China crushing Islam. Example can be seen by the way China is crushing Uyghur Muslims. We covered it in details in our previous article China Razed A Xinjiang Village Mosque And Erected Public Toilet On The Site : Pakistan, Turkey Silent

Would the Hindus in Nepal unite and bring back democracy in Nepal? Is it possible that the only Hindu country in the world be again restored its state religion? As long as China supported Communist government is in rule in Nepal, today they are destroying Hindu traditions, tomorrow it can be a turn of Buddhist Traditions and then the Muslim/Christian Traditions.

Communists can never be trusted that they will respect any religion. If people are quite because its Hindu Traditions are being destroyed in Communist Nepal today, there may be a time when Buddhist, Christian, Islamic traditions may also be destroyed once the Nepal becomes a colony of China in future. Unless Nepal public does something, none of their cultures will be safe.