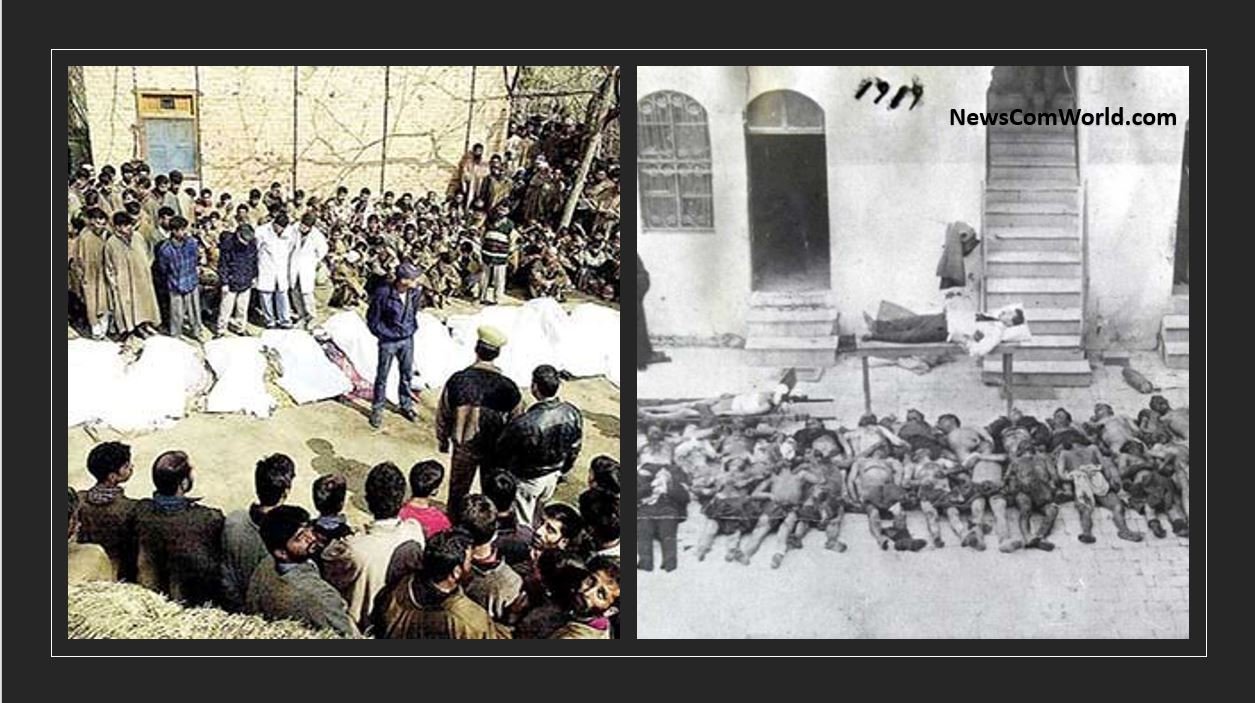 Whole Global Community is at war with the Islamic Supremacism in a crumbling global order. Whether it is the ISIS or Al Qaida or Hizbul Mujahidin or Taliban or Boko Haram or Pakistanis or the Mullah Regime of Iran or the Erdogan’s Neo-Ottoman dream, a new world order is taking place that wants to impose their own laws on the entire world. In this new world order there will be no rights for Women, transgender will be hunted and eliminated, Kafirs (non-Muslims) will be forced to convert, their daughters abducted, raped or converted forcefully and married to Islamist Radicals.

We need to remind our readers of the three biggest Massacres in the 20th Century that the Leftist/Liberal Media did not want the International community to pay attention to. There are no talk shows or TV debates. Seems like no one paid attention to the biggest holocaust after Hitler’s Nazism. These was Armenian Genocide by Ottoman Turks in 1919 that killed over 1.5 million Armenians. Then there was another Armenian Genocide in 1988 where 300,000 Armenians were killed by Azerbaijanis Radical Islamists. Thirdly there was the Genocide of Kashmiri Pandits (Hindus) in Indian Kashmir by Pakistan supported Islamist Radical Terrorists that lead to mass exodus by Hindus from Kashmir.

Armenian Genocide of 1915 by Ottoman Turkey

Everyone is aware of the Armenian Genocide in early 20th Century of 1915 in which over 1.5 Million Armenians were murdered by Ottoman Turks to establish Islamic Supremacism. The Armenian Genocide (sometimes known as the Armenian Holocaust) was the systematic mass murder and expulsion of 1.5 million ethnic Armenians carried out in Turkey and adjoining regions by the Ottoman government between 1914 and 1923. In 1915, during World War I, leaders of the Turkish government set in motion a plan to expel and massacre Armenians. By the early 1920s, when the massacres and deportations finally ended, 1.5 million Armenians were dead, with many more forcibly removed from the country.

After that, ordinary Armenians were turned out of their homes and sent on death marches through the Mesopotamian desert without food or water.

Frequently, the marchers were stripped naked and forced to walk under the scorching sun until they dropped dead. People who stopped to rest were shot.

At the same time, the Young Turks created a “Special Organization,” which in turn organized “killing squads” or “butcher battalions” to carry out, as one officer put it, “the liquidation of the Christian elements.”

These killing squads were often made up of murderers and other ex-convicts. They drowned people in rivers, threw them off cliffs, crucified them and burned them alive. In short order, the Turkish countryside was littered with Armenian corpses.

Records show that during this “Turkification” campaign, government squads also kidnapped children, converted them to Islam and gave them to Turkish families. In some places, they raped women and forced them to join Turkish “harems” or serve as slaves. Muslim families moved into the homes of deported Armenians and seized their property.

Armenian Genocide by Islamist Radicals of Azerbaijani in 1988

One of the survivor of the Armenian Genocide by Islamist Radicals of Azerbaijan in 1988 narrated the story that brings tears to the eyes. This is why Armenians will never leave their lands to the Azeris!

“The image of the 12th floor of my house in Baku, Azerbaijan haunted me all my life as a child and as an adult. I watched from our balcony as tens of thousands of Azerbaijanis gathered in the boulevard, singing to clean the city from the Armenians. Absolute fear, my mother grabbed me on the balcony, turning off the lights. The ethnic killings of Armenians began on February 27, 1988, in the town of Sumgait, just 18 miles from the capital where we lived.

After the rally, the men were given lists, addresses of Armenian neighborhoods, houses and places of work. Immediately my family went into hiding. No one was spared, complete anarchy. Thousands of Armenians have been brutally tortured sodomized, burnt alive. Pregnant women and babies, girls, women and even grandmothers were gang raped while our brothers, fathers, husbands were forced to watch. Women were forced to dance in the streets naked, then soaked in gasoline and set on fire alive. Babies smashed against the sidewalks. (Forgive me for sharing the details … I live with these memories) My loved ones, stabbed, beaten, tortured, raped, kicked out of the building alive and their bodies mutilated.

Over 300,000 Armenians purged overnight from their homes, grab what they can carry on the run to safety. This is how my family became refugees, this is what we miraculously survived.

This is the horror repeating itself in my mind. We function, carry on, rebuild life as best we can, with post-traumatic stress disorder – genocide is not something the human psyche can simply “handle.”

When refugees are brought into an adoptive community, we are quickly immersed in employment, public schools and we are supposed to “assimilate.” Imagine living with this aggravated trauma.

The stress of rebuilding your life in a new land with no resources to help heal from surviving horrific war, massacre, torture, violence, loss of family members … just a few hours of orientation, a job and the pressure to assimilate quickly.

This year marks the 30th anniversary of the ethnic murders in Baku. Today, I remember my loved ones and the thousands who were killed, and I pledge to continue to fight for justice in their honor.

Source: A survivor of this ethnic cleansing! For security reasons we will not put the name of this person because we all know how dangerous it can become once his information is in the hands of Azeris and Turks.

If you’ve read all of this, you might finally understand what is at stake today in the Armenians’ fight for Artsakh! We are at war for our existence, our right to life, our right to simply exist! And we will win

The slogans: “Pakistan se kya rishta? La ilaha ilallah” (What is the relation with Pakistan? There is no God but God.) followed by “Azaadi ka matlab kya? La ilaha ilallah” (What is the meaning of freedom? There is no God but God.) and ‘Asi gachchi Pakistan, Batao roas te Batanev san’ (We want Pakistan along with Hindu women but without their men) indicate that Pakistan for Kashmiris meant Islam, and freedom for Kashmiris meant Pakistan, all the while showing an open hatred to Kashmiri Pandits.

In 1990 a report showed that almost a thousand of the elite Kashmiri Muslims were on the payroll of the Pakistan Intelligence Agency ISI.

One reason why Kashmiris were uncomfortable in joining Pakistan was its large non-Muslim minority, who would have no place in Islamic Pakistan. Hence by resorting to the systematic killings of Hindus, as well as spreading fear amongst them through newspaper ads and pamphlets ordering them to leave or face death, Pakistan was able to overcome this major obstacle.

The crimes against humanity perpetrated against the Kashmiri Pandits were tragic. While genocide occurred on a small scale, but the objective was to drive them away rather than wipe them out. The dozens of killings and rapes were always followed by warnings for Pandits to get out, which suggest that the attacks were more as a statement rather than intent for mass genocide. But what was most surprising to Pandits was how there were large demonstrations in several Kashmiri cities by common Kashmiris with the slogan: “Asi gachi Pakistan, batni rosin batta gatssin.” In Kashmiri this means: We will become a part of Pakistan, Pandit women can stay with us but Pandit men must leave.” They could understand why the extremists wanted them to leave, but were shocked when the masses joined in.

The threat to Kashmiri Pandits (Hindus) can be gauged from this incident where a young engineer named BK Ganjoo, who was brutally murdered and his wife was forced to eat rice soaked in his blood. The young man had concealed himself in a rice container in his attic when the terrorists came looking for him. The terrorists shot him through the container and forced his wife to eat the blood-soaked rice.

The list of innocent persons who fell prey to the bullets of terrorists is again illustrative of the Islamization drive. The victims included prominent educationists and subscribers to secular ideals.

Libraries of Universities were destroyed for having unislamic books, and freedom of speech was suspended. It was clear the movement was not against India, but all things unislamic in their eyes.

While comparisons to Nazi Germany are fraught with danger, it does seem the population were caught in a mass hysteria that they now admit was a mistake. I have heard many anecdotal stories from others who have met with Kashmiri Muslims in Kashmir who have shown much resentment in not doing anything to stop the fundamentalists. It is difficult to determine if they genuinely wanted an Islamic State of Kashmir, or if they merely followed the trend as if it were a fad.

The movement was not merely an indigenous one, but clearly influenced by Pakistan.

Will Pakistan be stripped of its Nuclear Arsanel to prevent it getting into the hands of the Islamist Radicals?

Will International Community come forward for the protection of Armenians who have alreay seen 2 major genocides and currently is defending itself from the third genocide underway by Azerbaijan and Turkish forces supported by Radical Islamist Terrorists hired from Syria, Lebanon and Pakistan?