Afghanistan – Pakistan Conflict, An Opportunity For Freedom Of Balochistan And Sindhudesh 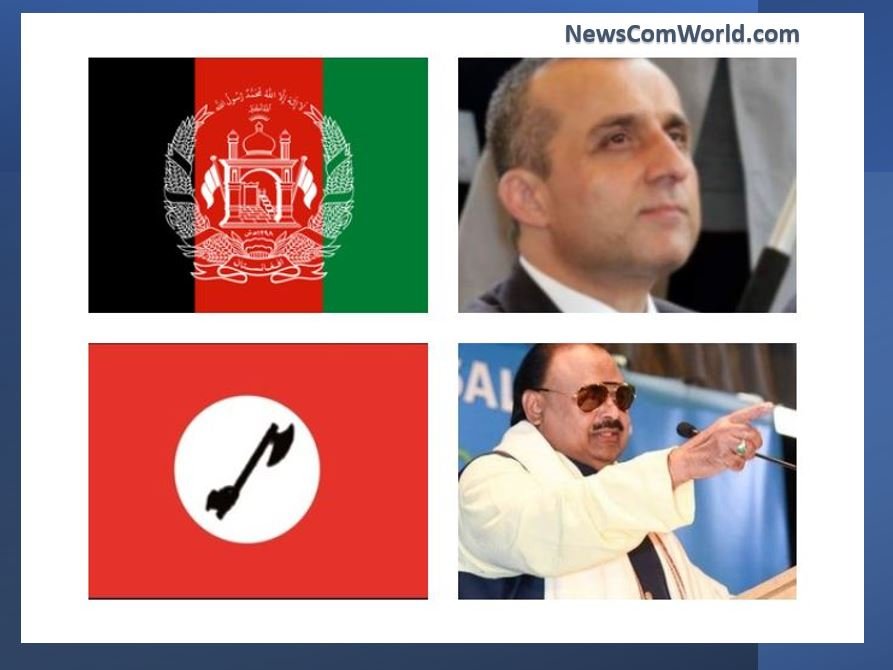 Pakistan is overtly supporting its Taliban units. Afghanistan – Pakistan conflict, an opportunity for freedom of Balochistan and Sindhudesh.

Amrullah Saleh First Vice President – Islamic Republic of Afghanistan from his twitter handle @AmrullahSaleh2 made a sensational revelation. He tweeted, “Pakistan air force has issued official warning to the Afghan Army and Air Force that any move to dislodge the Taliban from Spin Boldak area will be faced and repelled by the Pakistan Air Force. Pak Air force is now providing close air support to Taliban in certain areas.”

If anyone doubts my tweet on Pak Air Force & Pak Army warning to the Afghanistan side not to retake Spin Boldak, I am ready to share evidence through DM. Afghan aircrafts as far as 10 kilometers from Spin Boldak are warned to back off or face air to air missiles. Afghanistan is too big to be swallowed.

Earlier, Pakistan foreign ministry spokesperson Zahid Hafeez Chaudhri had confirmed that the Pakistan sponsored Taliban units were in control of a key town on the Afghan side of its border area.

This comes a day after the Pakistan Army’s Taliban unit’s claim that they have seized the border town as part of an offensive across the war-torn country. Local media on Wednesday reported that the Taliban have captured a main border crossing with Pakistan, in southern Kandahar province.

The crossing is one of Afghanistan’s busiest entry points and the main link between its southwest region and Pakistani ports. Multiple reports suggest that the Taliban units had taken down the Afghan flag from the top of the border crossing gate between the Afghan town of Wesh and the Pakistani town of Chaman.

Taliban spokesperson also took to Twitter to announce the capture of the crossing. “With this, the important road and customs between Boldak and Chaman came under the control of Mujahidin, the Islamic Emirate assures all traders and residents in the town that their security will be tightened,” Taliban spokesperson Zabihullah tweeted in Pashto. The terrorist group further stated that they will resume travel and transit on the passage once they reach an agreement with the Pakistan side.

As per a tweet on 15-July 2021, Ministry of Defense, Afghanistan from their twitter handle @MoDAfghanistan tweeted, “193 #Taliban terrorists were killed and 74 were wounded as a result of #ANDSF operations in Paktika, Ghazni, Kunar, Nangarhar, Kandahar, Zabul, Herat, Badghis, Helmand, Nimruz, Balkh, Samangan, Jowzjan, Takhar and Kunduz provinces during the last 24 hours. & 13 IEDs were defused.”

An hour later, Ministry of Defence again tweeted another piece of information about the success of Afghan airstrikes on Pakistan Army’s Taliban Units locations. They said, “25 #Taliban terrorists were killed and 10 others were wounded in airstrikes conducted by #AAF in Zawal district of #Herat province, yesterday. Also, some amount of their weapons & ammunition were destroyed.”

At the same time, as per another tweet on success of Afghan airstrikes, MOD tweeted, “26 #Taliban terrorists were killed and 8 others were wounded in #airstrikes conducted by #AAF in Jowzjan- Sat-e Pol highways, Afghantepa area #Jowzjan province, yesterday. Also, some amount of their weapons, amos & equipment were destroyed.”

As per another tweet on 15-July 2021 evening local time, @MoDAfghanistan tweeted, “15 #Taliban terrorists were killed and 8 others were wounded in an #airstrike conducted by #AAF at the outskirts of #Takhar provincial center, today morning. Also, 2 vehicles, some amount of their weapons, amos & equipment were destroyed.” They also shared a video of the airstrike.

At the same time, as per another tweet on 15-July 2021 evening local time, @MoDAfghanistan tweeted, “23 #Taliban terrorists were killed and 9 others were wounded in an operation conducted by #ANA Commando Forces with support from #AAF in Azrat Sultan district of #Samangan province, today morning. Also, a large amount of their weapons & ammunition were destroyed.”

As per yet another tweet about the success of its airstrikes on Pakistan Army’s Taliban units, @MoDAfghanistan tweeted, “18 #Taliban terrorists were killed and 12 others were wounded in #airstrikes conducted by AAF in support of #ANDSF operations in Karokh & Injil districts of #Herat province, yesterday. Also, 2 vehicles, some amount of their weapons & amos were destroyed.”

Another success of counterstrike in coordination with AAF airstrikes in another area was reported in another tweet. @MoDAfghanistan tweeted, “16 #Taliban terrorists were killed and 18 others were wounded in an operation conducted #ANDSF with support from #AAF in Guzara district of #Herat province, last night. Also, some amount of their weapons, amos & explosives were destroyed.”

On 14-July 2021 also, Ministry of Defence had tweeted, “38 #Taliban terrorists were killed and 15 others including one of their commanders named “Qayum” son of “Sofi” were wounded in #airstrikes conducted by #AAF at the outskirts of #Takhar provincial center , afternoon today. Also,2 vehicles,1 machine gun & their amos were destroyed

With Afghanistan conflict moving into a decisive phase, the outcome of the on-going war between Pakistan’s proxies and Afghan national army is going to have serious consequences on Pakistan.

Afghan society has changed tremendously over the last 20 years. There is no way which can lead to Talibanization of Afghan Society. Today’s Afghanistan is well integrated with rest of the world, more importantly with the west.

Afghan diplomats have done a splendid job in presenting the new image of Afghanistan to the world.

The adventure which Pakistan has tried in Afghanistan will cost Pakistan liberation of Sindhudesh and Balochistan. One can be rest assured that Afghan society and Afghan government will respond to Pakistan in kind.

Pakistan on one hand is taking finances from US and NATO to appear to be playing an active role in negotiations with Taliban, while on the other hands financing, arming, sponsoring the same Terrorists besides sending its own troops in mufti dresses to fight Afghan Armed Forces and is killing innocent civilians in Afghanistan.

However despite the US and Europe having tons of intelligence from their intelligence agencies about Pakistan responsible for war in Afghanistan and behind all the casualties US and NATO suffered in Pakistan that hide Osama-Bin-Laden in its territory near its Army cantonment area, no action was taken against Terrorist producing nation Pakistan. While the same Pakistan was made as a party to the so-called peace talks on Afghanistan.

People are worried for the safety of women and children in Afghanistan.

What we must not overlook is the role played by India in the region.

There is no doubt that India will become the most Powerful Nation in the World. It will surprise even  the USA, the United Kingdom, Russia and Japan.

We have seen that India has effectively evaporated US ties with Pakistan, next India has created an alliance with Vietnam, shattered China’s Superpower dream and made use of the 3 Countries..

The long-running dispute over oil extraction overseas between Vietnam and China has benefited India. With India’s support, Vietnam began producing Oil in China’s Southern Seas. Vietnam now supplies all of its Oil to India. The United States has different support for this. Meanwhile India has continued to make Pakistan a poor Country, that too without going into a war.

India has brought the Port of Iran under his control and has set up an Indian Military base on the border with Afghanistan, very close to the area that divides Pakistan. In order to increase Indian trade, it has also built a route through Iran (leaving Pakistan) to Afghanistan..This route will also be used to supply afghan forces in time of need.

Very soon India will completely capture Pakistan  occupied Kashmir and subsequently Pakistan will fall into 4 pieces (in the coming seasons)  This will happen on the warning of Narendra Modi.

Saudi Arabia, Pakistan’s traditional ally, will also play a Key role in the Partition of Pakistan..

In Asia, India has almost finished China and the United States, Entire muslim world is against Pakistan is evident from the fact that  UAE fined the Foreign minister of Pakistan on landing in UAE & sent the minister back. Malaysia took over an  Pakistan airplane to recover debts owed by Pakistan.

China did not come to rescue of Pakistan in either of the cases.

India is doing more harm to Pakistan than the real War, by using Muslim Countries against Pakistan, India has established the fact that the fake narrative of Pakistan being torch bearer of Islam simply vanished in thin air.

What do people on ground say?

People are suggesting that since Pakistan has actively joined war alongside Taliban Terrorists and providing air cover to its Taliban Units, Afghanistan should declare a war against Pakistan.

Afghanistan which has a majority of Pashtun Baloch and Sindhi population on its side is sure to cross the Durand line and Taliban won’t be able to protect Pakistan from Afghan storm.

The political leadership of both nations viz Sindhudesh and Balochistan must cease this opportunity given to them by Pakistan itself and declare their independence from Pakistan in the ensuing chaos.

Trying to capture Afghanistan will result in breaking of Pakistan which in turn will bring peace prosperity and peace not only in the region but entire world.

Speaking to some Baloch Freedom Fighters, they suggested that if Afghanistan can provide them shoulder fired Anti-Aircraft missiles and provide arms, they are ready to fight against Pakistan. If Afghanistan can openly support Baloch, Sindhi, Pashtun Freedom Fighters and arm them, they can make sure their territories are not used for an attack against Afghanistan. This coordinated attack against already bankrupt Pakistan will further weaken Pakistan.

As per some people we discussed the current issues, they suggested that if a war is started by Afghanistan, Balochistan, Sindhudesh against Pakistan, Afghanistan should invite India and other allies for airstrikes against Pakistan and India can get an opportunity to take back Pakistan Occupied Kashmir and Gilgit-Baltistan that are illegally occupied by Pakistan for last 75 years.

About the Author: Author is a Turbat (Balochistan) based Sindhi political activists. Twitter Handle: @__SindhuDesh2

In light of the Pakistan – Afghanistan conflict, will Afghanistan support Baloch, Pashtun, Sindhi, Mohajir Freedom Fighters and provide them support to fight for their independence?

Will Afghanistan invite its allies to defend its territories from attack by Pakistan Army and Pakistan Air Force?