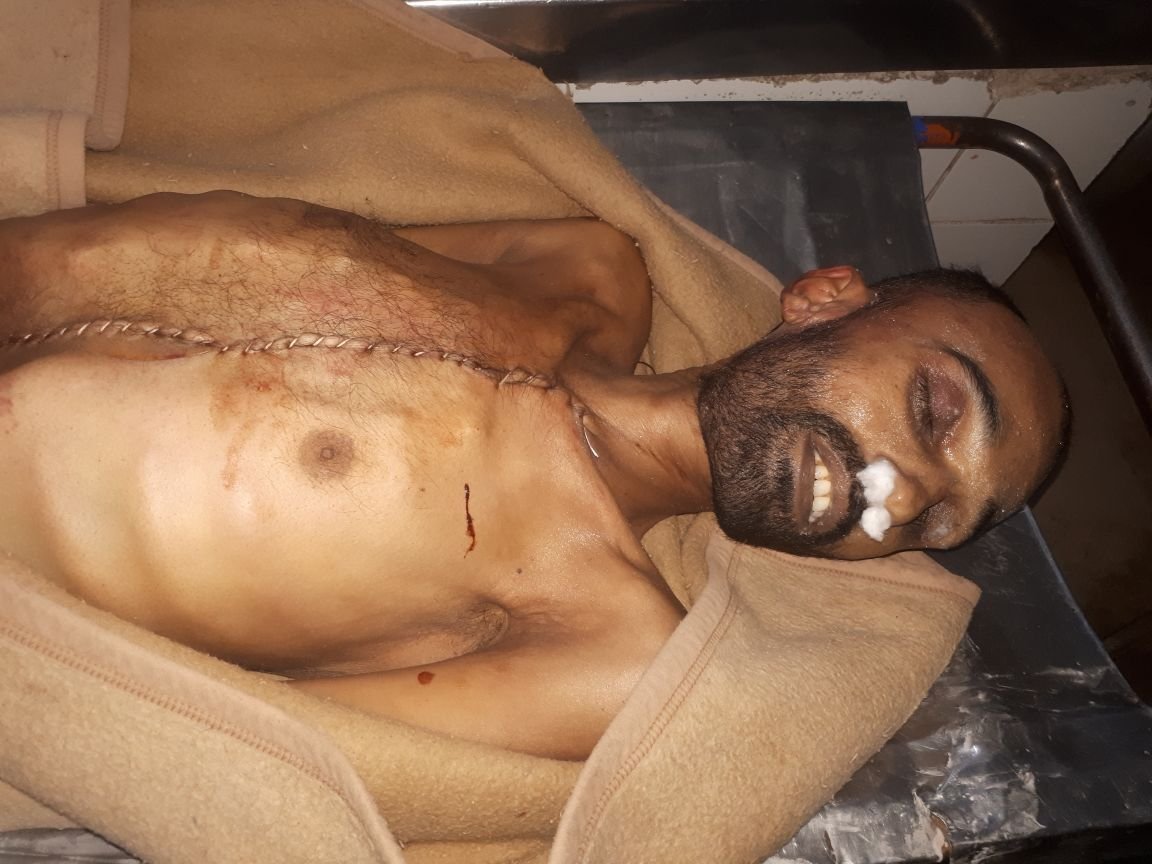 There are many reports about Pakistan Army doing Organ Harvesting of the missing persons. We decided to investigate this and the information we got was horrific. Pakistan Army is actively involved in abducting people from ethnic areas of Balochistan, disappearing them, leaving no evidences of arrests, torturing them and doing Organ Harvesting from their bodies and then disposing them off.

Earlier Pakistan Army would simply dump the bodies in the secluded places, but since the allegations of Organ harvesting started surfacing, Pakistan Army make sure that they bury the dead bodies in their presence so that the family members or the members of civil society do not uncover the bodies and see the marks of stitching and any other evidences of organs being removed. None of the bodies that are returned by the Pakistan Army, are allowed to go through the Post Mortem.

Guhram Baloch s/o Basham Baloch’s was abducted by Pakistan Army. Later his dead body was dropped at his house and Pakistan Army ordered to bury his dead body under its surveillance. This news was reported on social media. Local correspondents investigated more details about this incident. It was found that his body was cleaved, and essential organs were taken out in the military custody.

Next day both brothers were released after they were extremely tortured. Unfortunately, Guhram Baloch’s dead body was brought to his home by Pakistan Army in their own Army Cars.

Pakistan Army brought his dead body at home but didn’t allow anyone to see his dead body. They ordered to bury him urgently. A local on request of anonymity told, “The Army Personnel were standing there, and family members and other people were so aghast, due to the fear couldn’t say nothing.”

He told, “Guhram Baloch’s body was covered with a white cloth. Only his face was disclosed. Army personnel did not allow anyone to see his body. However, during burial, they saw a little. His body was cleaved, and all essential organs were taken out.”

What happened after that?

Sources said, “Pakistan Army gave five thousand rupees and a sack of meal to family members of Guhram Baloch. They intimidated his family that if they highlight this incident, then its results will be more worse.”

As per the source, “This incident exacerbated the fears of people in these areas. Media and Human Rights Organizations are silent about such horrific crimes of Pakistan Army. That’s why, Pakistan military forces do what they want to do in Balochistan.”

Was it the first incident?

No, in Balochistan, the recovery of military tortured bodies of abducted persons, is rampant and a critical long issue. This humanitarian crisis is continuing since 2008. With the passage of time, situation has aggravated in Balochistan.

“One more minority Baloch person, Maqbool Baloch S/o Naimathullah, resident of Gumazi, who was a political activist, was whisked away on 18-February 2012, while he was traveling from Gumazi to Turbat city.

Akhtar Baloch S/o Ghulam Haider resident of Mazan Band Dasht, was also abducted by Pakistan Army and whisked away on 24-October 2012 from Turbot city. Maqbool Baloch and Akhtar Baloch’s cleaved dead bodies with body organs missing and both stitched, were found on 18 February 2013 from Sirjani town area of Karachi.”

As per him, “Another person, Rafeeq Baloch S/o Rozi Baloch, member of BNM Jahoo Zone, was abducted by Pakistan Army on 20-May 2016 from his hometown, Kohdo Jahoo. On 23-February 2019 his tortured dead body was found from Hub Choki district Lasbella. All his essential organs taken out and his body stitched.”

As per the source, “These are those incidents that were reported in local media but there are thousands of people who have been victims of such terrible and inhuman acts, thinking of them, gives goosebumps.”

BNM Central Information Secretary Dil Murad Baloch shared his party’s observations about these critical incidents. He said, “the grave violations of human rights, is not new in Balochistan. Since last two decades situation has exacerbated. Thousands of people have been victims of extreme torture and assassination. Thousands of dead bodies were dumped of the Roadside and in the forests. The majority are Baloch pro-freedom political activists who were martyred, were inhumanly tortured in Pakistan Army run Concentration Camps. This exploit continues till today.”

Dil Murad Baloch further said, “The first evidence of the extraction of essential organs came to light in 2013 when one of our senior leader, Abdul Rahman Baloch and Zahid Baloch were victimized by this policy. After them, several such inhuman incidents acquired in Balochistan. The meat of missing persons was sold at a hotel in Quetta, which was reported by international media as well. Besides that, as we get such updates, the essential organs of missing persons are being sold massively by Pakistan Army.”

According to Dil Murad Baloch, “now the inhuman acts of extraction of essential organs of missing persons, is exceedingly widespread. There has became a huge business and taken a heinous shape in occupied Balochistan. There is fear among the people of Balochistan. It is the foremost obligation of human rights defenders to take actions against such inhuman acts of Pakistan Army. Otherwise, this dirty trade will dilate.”

As per a Human Rights Activist, Sumaira Baloch, “Pakistan Intelligence Agency ISI, abduct the Baloch youths, and keep them in illegal detention. Pakistani secret agencies keep abducted Baloch prisoners in secret dungeons…somewhere at unknown places, without registering any cases or any documentation. They torture them, after that they dump and kill them and then throw their distorted bodies into the wilderness. Pakistan army is engaged in Baloch genocide. The United Nations and other human rights organizations are silent on Pakistan’s oppression!!!“

Senge H. Sering, President of Institute for Gilgit Baltistan Studies, Washington DC in one of his tweets in October 2015 shared a local news and tweeted, “Organ harvesting/trade including children is known phenomenon in Pakistan Occupied Balochistan. Locals blame military.”

Where do all these organs that are harvested from the missing people go?

We asked our source, where do all these organs that are harvested from the missing people go?

His reply was shocking. He told that there is a chain of Pakistan Army hospitals named CMH (Combined Military Hosptials). He told that any Army personal or any of their family members need any organs, the demand is immediately fulfilled by harvesting organs from the missing persons abducted by Pakistan Army. He said, since the arrival of China in Pakistan, major portion of the organs are sold to Chinese to earn foreign exchange. Further Pakistan is a hub for Transplant tourism and people from other countries come to Pakistan for cheaper organ transplants. In Pakistan they don’t need Donors. Any of the abducted persons who matches the recipients requirements, are cut open alive and the organs harvested”

Organ Harvesting illegal trade flourished in Pakistan. Because of the allegations, for name sake, Pakistan outlawed the commercial trade in human organs in 2010, imposing a jail term of up to 10 years and a maximum fine of Rs one million rupees for doctors, middlemen, recipients and donors.

The law permits donors to give their organs to recipients who are relatives and for altruistic purposes but bans the sale of human organs to foreigners.

However, recipients from countries such as Britain, Saudi Arabia and South Africa travel to the Pakistani cities of Lahore or Karachi where they are operated on in private clinics in residential areas or houses with makeshift operating theatres in basements.

A kidney is sold to foreigners for between four to Rs 10 million.

Human rights activist Naela Quadri Baloch in the past had said, “The pace with which our people are being abducted, in few years there will be no one left in Balochistan.”

She compares the suffering of Balochis to what the Jews went through at the hands of the Nazis or the pain of Bangladesh. She calls it a warlike situation, genocide to eliminate the entire tribe.

She said, “As per the existing population, every day 10 to 50 people (in Balochistan) are getting disappeared which will result in the elimination of Baloch people”.

She added, “They did the same with Bengalis, but their population was huge. Our population is less. They not only want Baloch resources including ports, gold, gas and natural resources but even the parts of our body including kidney and heart. They are kidnapping our children and women so that they get killed and their organs to be sold. Pakistani and Chinese armies are doing it together. You get the cheapest organ transplant in China. Where do they get all these organs? They have implemented the same in their country and have live blood banks. They are doing the same in Balochistan and Sindh. They are raping women and throwing their mutilated bodies. When will the UN listen to their voice?”

U.S. Department of the Treasury, Press Release on December 21, 2017

In a Press Release on December 21, 2017, U.S. DEPARTMENT OF THE TREASURY said, United States Sanctions Human Rights Abusers and Corrupt Actors Across the Globe.

The Trump Administration launched a new sanctions regime targeting human rights abusers and corrupt actors around the world. President Donald J. Trump signed an Executive Order (Order) declaring a national emergency with respect to serious human rights abuse and corruption around the world and providing for the imposition of sanctions on actors engaged in these malign activities.

In an Annex to the Order, the President imposed sanctions on 13 serious human rights abusers and corrupt actors. One of the sanctioned Human Rights abuser was MUKHTAR HAMID SHAH

As per the details provided in the Annex, “Shah is a Pakistani surgeon specializing in kidney transplants who Pakistani police believe to be involved in kidnapping, wrongful confinement, and the removal of and trafficking in human organs.  As an owner of the Kidney Centre in Rawalpindi, Pakistan, Shah was involved in the kidnapping and detention of, and removal of kidneys from, Pakistani laborers.  Shah was arrested by Pakistani authorities in connection with an October 2016 incident in which 24 individuals from Punjab were found to be held against their will.  Impoverished and illiterate Pakistanis from the countryside were reportedly lured to Rawalpindi with the promise of a job, and imprisoned for weeks.  Doctors from the Kidney Centre were allegedly planning to steal their kidneys in order to sell them for a large profit.  Police state that one of the accused arrested in connection with the events estimated that more than 400 people were imprisoned in the apartment at various times.”

Human Rights Activists are questioning, “Will Trump Administration impose sanctions against Human Rights Abuser, Pakistan Army and its high ranking officers including all the Army Generals who were deployed in Balochistan, for the disappearance of the missing persons and killing them after Organ Harvesting and dumping their bodies in mass graves?”

As per the Human Rights Activists in Balochistan, these charges are grave and need to be investigated by International Organizations. Guilty Pakistan Army Officers and Generals should be tried for war crimes in the International Court of Justice and be punished for their crime against humanity. As per the locals, if the Army of the Nation is committing the genocide of Baloch minorities, they have no other alternative than to demand total freedom from the tyrannical rule of Punjabi dominated Pakistan Army. Many family members of the victims of the brutality of Pakistan Army are forced to take up guns and are fighting a war against Pakistan Army for freedom of Balochistan.

As per locals, “Baloch people need total freedom from Pakistan. They want to form an Independent nation. Balochistan is rich in Natural Resources. These will sustain this independent new nation.” As per them, “this vicious circle of exploitation and Human Rights abuse will end only when they get freedom. Till then their freedom struggle will continue.” They requested International community to recognize Balochistan Government in Exile until they get Freedom from Pakistan.