Protests in Washington DC against Pakistan for 26/11 Terrorist Attack 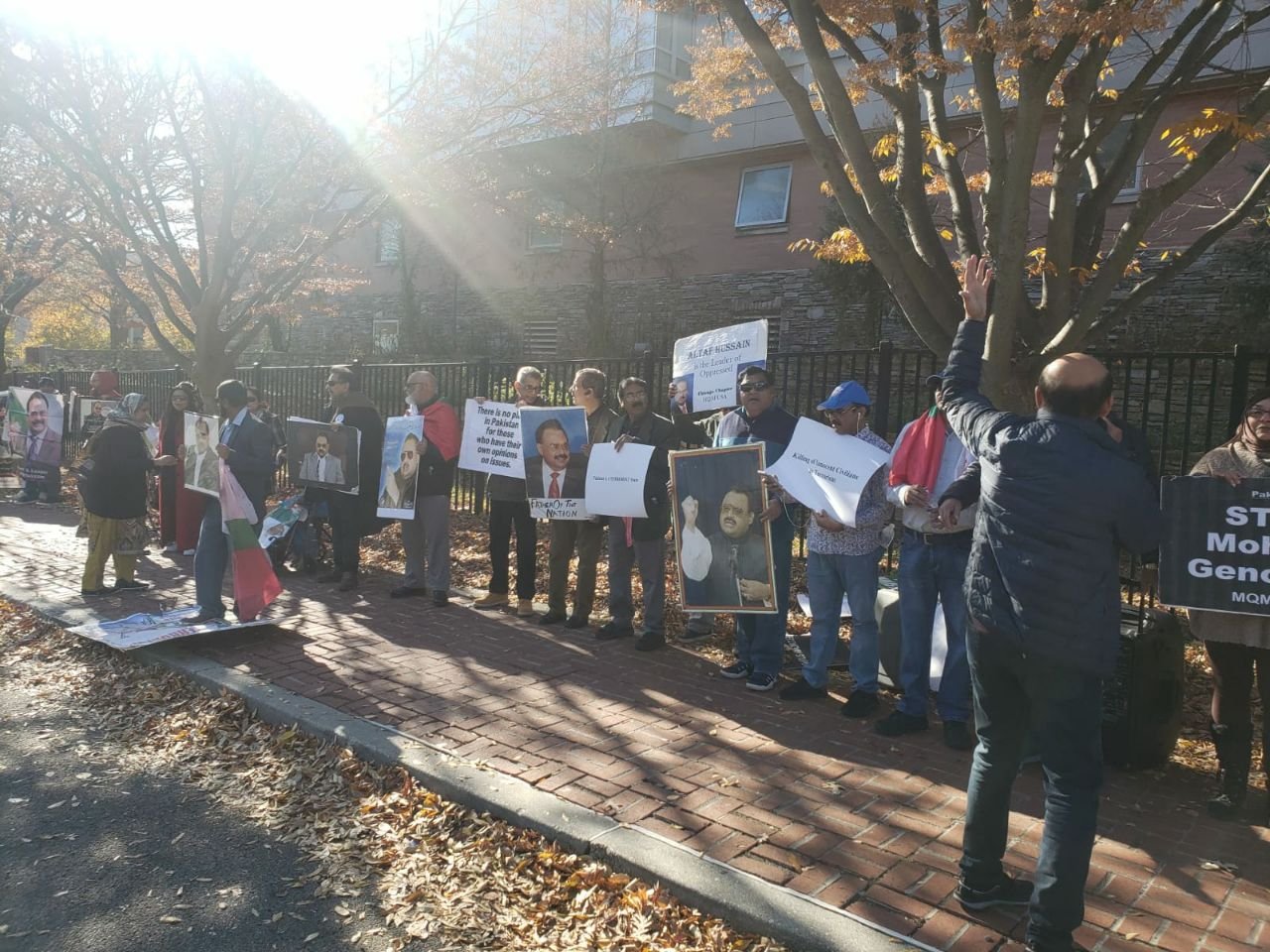 Terrorist Nation Pakistan which is a born enemy of India, has been constantly needling India since the Partition in 1947. It was 11 years back on 26/11/2008 that Pakistan sent its terrorists to carry out deadly attacks in the financial Capital of India, Mumbai and kill innocent civilians including women and children.

Terrorist Nation Pakistan sent 10 Terrorists of a UN designated Terrorist Organization Lashkar-e-Taiba, based in Pakistan, and carried out 12 coordinated shooting and bombing attacks lasting four days across Mumbai. The attacks, which drew widespread global condemnation, began on Wednesday 26 November and lasted until Saturday 29-November 2008. At least 166 people including 6 US Citizens were killed and more than 300 were wounded. 9 Terrorists were also killed by the Indian security forces and one was arrested who was later sentenced to death and was hanged in India. We covered the details about 26/11 Pakistani Terrorist attacks in details in our article India Will Never Forget Nor Forgive Pakistan For 26/11 Terrorist Attacks

The protesters gathered outside the embassy also raised the issue of the killings and enforced disappearances of different ethnic groups in Pakistan. The demonstrators carried placards reading “Stop Mohajir genocide”, “Free Balochistan”, “Pakistan is a safe haven for TERRORISTS”, “There is no place in Pakistan for those who have their own opinions on issues”, “Justice for Hasan Zafar Arif”, “Pakistan is TERRORIST state”, “Altaf Hussain is the Leader of Oppressed”. Some protesters carried Pictures of the Leader of the Oppressed nations Altaf Hussain who is considered as the modern-day Nelson Mandela.

One of the posters depicted a cartoon that showed the Pakistan Army Chief General Bajwa sitting comfortably on a sofa besides a heavily armed Terrorist and the Pakistani Prime Minister Imran Khan sitting in their lap like a pet dog. Poster read “I am ADOPTED & SELECTED”. The same poster also read, “We all R on the same page” depicting the coordination between Pakistan Army and over Hundred UN Designate Terrorist organizations ruling the Terrorist Nation Pakistan. It also showed that the Democracy is for the name sake as the Prime Minister Imran Khan is nothing but their pet, sitting in their lap. Poster also further read, “Continue US Financial & Monetary Aid, we make sure to continue Exporting Terrorism”.

In the Video shared by the Muttahida Qaumi Movement (MQM) Altaf Group posted above, it showed a Pakistani Intelligence Agency ISI agent, a Punjabi Pakistani filming the protesters on his mobile camera.

One of the protesters told that, “Pakistan Intelligence Agency that runs all the Terrorist organizations in Pakistan is filming all the protesters present. I am afraid that our relatives in Pakistan will now be abducted and Fake Charges will be filed against our relatives for raising our voice against the Pakistan Army which is nothing but a Terrorist Army. You know how Gulaila Ismail escaped to the US and now her father is in trouble and Pakistan Army has filed grave charges against him to implicate him in Fake Terrorism cases. Similarly, we fear Pakistan Army will do that with our relatives to crush our voices. We already know this is going to happen before deciding to stand in front of the Pakistan Embassy in the US to protest against the Genocide of Mohajirs, Baloch and all other ethnic groups and Oppressed nations in Pakistan.”

Despite Pakistan Intelligence Agency filming everyone present during the meeting in order to teach them a lesson by enforced disappearing their relatives in Pakistan, these brave protesters, continued to Protest.

He said that we want the world community, US, Europe, India and other countries to support our demand for Freedom from Pakistan

An Indian, Senge Hasnan Sering who is from Gilgit Baltistan, that is now part of the Indian Union Territory of Ladakh was also present at the protest. He said that “Gilgit Baltistan is the constitutional part of India. Gilgit Baltistan is now part of the Union Territory of Ladakh, India. We are part of India since 1947, however Pakistan has forcefully occupied our land. Pesently it is under the occupation of Pakistan. Pakistan’s is using Terrorism to promote its strategic interests. Whole world should stand against Pakistan. As a result of the attack on 26/11 in Mumbai, India, whole world has taken consequences and impact of Pakistan’s Terrorist activities seriously. Whole world should now realize and isolate Pakistan. Whole world should unite to end Terrorist activities and Terror Training camps in Pakistan.”

He also tweeted on Twitter, “Today we protested in front of Pakistan embassy in Washington DC to remind PAK military of its role in Mumbai attack. Baloch Mohajir Pashtun Sindhis all condemned Pak and asked US govt to discontinue ties with global Jihad hub. Sindhis & Muhajirs introduced Free Maha-Sindesh idea”

He further tweeted, “Today we protested in front of Pakistan embassy in Washington DC to remind PAK military of its role in Mumbai attack. The Sindhis & Muhajirs chanted slogan of Free Maha-Sindesh during the protest – an idea which was recently introduced by MQM Chief, Altaf Hussain. #MumbaiAttacks”

Besides them there was also a leader of a Political Party from Balochistan, who also expressed his support to India and condemned Pakistan Army killing innocent Baloch Nationals using its Death squads (comprising of Army regulars and its trained Terrorists). He also appealed international community to standup against Pakistan and help them get freedom from the Terrorist Nation Pakistan.

There was a Sindhi JSMM Representative Zafar Widhyarthi, also present during the protests.

MQM USA organized a protest in front of Pakistan Embassy in Washington DC to pay tribute to the martyrs of Nov 26th 2008 Mumbai Massacre originated by Pakistans callous Military wing ISI through series of terror attacks in the city of Mumbai executed by ISI’s 10 well trained group of terrorists. Some 166 including 10 US citizens were killed and hundreds were badly wounded in this terror attack.

Today’s protest was attended by the representatives of various political parties of oppressed ethnic communities of Pakistan and a large numbers of people from different walk of life including families with young children, Senior Citizens and youth traveled from different states of US to Washington DC showed heir Solidarity with their leader Altaf Hussain and his ideology of Love, Peace and humanity and strongly condemnd terrorism, nepotism and attrocities.

Mohajirs, Sindhis, Balouches and Gilgit Baltistanis demonstrated their unity and affirmed their affiliation with Altaf Hussain and stood with humanity and rejected Supporters and promoters of terrorism they raised question on why every terror attack footsteps ends in Pakistan.

Central Organizer MQM USA Mr Rehan Ibadat talking to the media said, Terrorism will never cease in Pakistan where top rank Military officers mainly Generals are criminals and terrorist in disguise, he added the ultimate tragedy is not the cruelty by the bad, but the silence over that by world.

Crowd chanted slogans in front of Pakistan Embassy against terrorism, atrocities and nepotism of Pakistani Generals and their vicious wing ISI.

Representatives of political parties expressed their views against Pakistans ISI they said freedom from Pakistan is become inavitable.

On conclusion central Organizer MQM expressed deep gratitude for their generous support to all the presents, later protest committee Washington DC served food and drinks to all.

India has repeatedly asked Pakistan to take action against the terrorist groups operating from its soil. However, the architects of Mumbai attack and UN Designate Terrorists like Hafiz Saeed, Zakiur Rehman Lakhvi and Sufayan Zafar continue to receive military patronage in Pakistan.