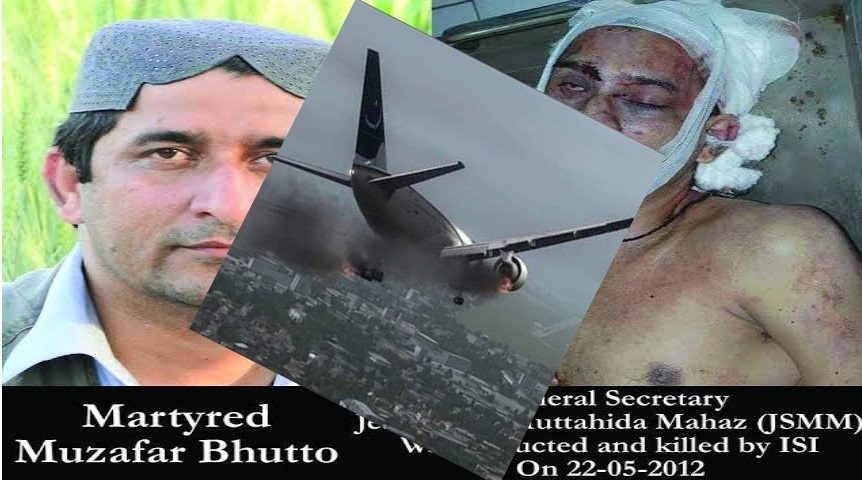 A PIA plane from Lahore to Karachi crashed in Karachi Sindh on 22-May, the day when entire Sindh was mourning murder of great freedom fighter of SindhuDesh Shaheed Muzaffar Bhutto. We covered about the Crash of the PIA plane in our previous article Pakistan PIA Civilian Plane Crashes: Public Money Spent on Terrorists

However, inputs indicates that Pakistan army got panicked by the huge response from the people of Sindh while they observed the martyrdom of Muzaffar Bhutto and Pakistan Intelligence Agency ISI Crashes PIA Jet.

Muzaffar bhutto was kidnapped twice by the Pakistan Intelligence Agency ISI and was made to suffer extreme torture. Initially disappeared and abducted on 6-October-2005, he was returned on 7-November-2005. While in custody he was tortured by Pakistan’s Intelligence Agency ISI who were forcing him to denounce the struggle for independence which is refused even under extreme torture.

Pakistan again abducted Muzaffar bhutto on 24-February-2011 and his tortured body was found near Hatri, Hyderabad Sindh on 22-May-2011.

By eliminating Muzaffar Bhutto Pakistan thought that they have been able to eliminate the idea of freedom from Sindhi population, but they realized that idea of freedom cannot be erased and people who are born free cannot be enslaved by force.

Muzaffar Bhutto is survived by two sons and one daughter. His daughter Hina Bhutto appealed to citizens of SindhuDesh to remember her father’s 8th death anniversary and commit to his idea of free and independent Sindhudesh.

Entire Sindh was remembering the sacrifice of Muzaffar Bhutto and resolve for Independence of Sindhudesh was getting stronger by the hour.

Pakistan had left no stone unturned to hide and erase the Sindhi freedom fighters from history of Sindh. They found that Sindh nationalism was rising again and with more lethal power, the phenomenal response to hashtag  #TributeToShaheedMuzaffarBhutto which started trending since night of 21-May itself made ISI panick and they were looking for some event which could divert the people’s focus from Muzaffar Bhutto Shahadat Day.

Just as when ISI was totally exposed for its links with Taliban and its terrorism related activities in Afghanistan and India, it carried out Army Public School Peshawar massacre (APS peshawar) in order to divert attention from its own terror related activities and to present itself as victim of terrorism. Same was confirmed by ex-ISI chief Lt. Gen Asad Durrani in a TV program. Similarly the possibility of ISI orchestrating the plane crash to subdue the nationalist movement of SindhuDesh is highly possible.

It should be noted that both engines of the aircraft failed at the same time. This is very rare occurrence in modern aircraft. This can happen only if

3. Fuel is not reaching the engines.

None of this was indicated in the conversation released. Only possible reason is a deliberate sabotage to divert public attention from Independence movement to something emotional.

Our sources have confirmed that the earlier call recording released by Pakistan Intelligence Agency ISI is fake.

According to a passenger who survived, “there was no may day announcement by pilot inside the plane and everything was normal until the jet engines blasted from outside”.

It may also be noted that both engines of the jet failed just over a densely populated area, moreover Pakistan needed a big event to adjust the casualties it has suffered at LoC and in Balochistan. As a matter of principle, Pakistan army never accepts any casualties it suffers in any combat. Primary reason for this shameful act is the political nature of Pakistan army. Since the army has coronated itself as legitimate ruler of Pakistan, it is thus bound to show a tough face to its population. As a result Pakistan Army not only insults the family members of dead soldiers, but also has jeopardized the political setup of Pakistan, where not a single civilian prime minister has been able to complete its term till date.

Given the vast business empire of Pakistan army in almost all the sections of business, political stakes of Pakistan army are very high. Read our previous article Fauji Foundation of Pakistan looting Pakistani Tax Payers Money to know about Army high handedness.

As a consequence to this, civilians in Pakistan have to suffer terrorism from Taliban, ISI, death squads and large scale massacre like Peshawar APS massacre and PIA jet crash in Karachi.

Are civilian lives so cheap in Pakistan that the Pakistan Army and the Pakistan Intelligence can kill anyone just to divert the attention of public from the Independence movement?

The diversion can be for one day, but what will Pakistan Army and Pakistan Intelligence Agency do and how many innocent civilians Pakistan Army Kill, if this revolution for freedom continues and spreads in wider areas?