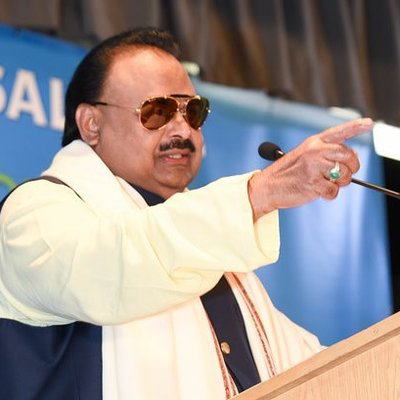 Mr. Altaf Hussain is leader of one of the largest political party in Pakistan occupied Sindh called Muttahida quami movement (MQM) the party has been sharing power in Sindh province as well as in Federal government for the past 30 odd years.

In his appeal to United Nation’s Mr. Hussain has demanded complete and absolute freedom for enslaved civilians of Sindh Balochistan and Pashtunistan all areas illegally occupied by Pakistan.

Freedom movement for Sindhudesh goes as back as 1971, first started by Hon G.M Syed, Syed was the founder of Sindh Awami Mahaz, which spearheaded the freedom movement of SindhuDesh.

His party is presently headed by Mr. Shafi burfat,another politician who has been forced into exile by Pakistan army’s brutal oppression of politicians in Sindh.

Due to pressure from Pakistan army and its interference in political activities Mr. Altaf Hussain was forced to seek refuge in UK and is residing in UK since last 28 years, but his political party continued to operate in Sindh and won all seats from Karachi.

A major crackdown was launched by Pakistan army on MQM in the year 2017 and thereafter all media houses are banned from reporting any news about Mr. Hussain, even showing his image or mentioning his name on any media platform including print as well as digital media is prohibited, a large number of MQM political workers were kidnapped tortured and killed by Pakistan army since crackdown was launched against Indian muslims in Pakistan.

In a major turn of even, Mr. Altaf hussain today has demanded that they are seeking complete and absolute freedom from Pakistan’s occupation.

The demand for complete and absolute freedom from Pakistan has come after Mr. Hussains made appeal to Indian government for support in safety of Indian Muslims stranded in Pakistan since 1947. MQM was initially formed to give political voice to Indian Muslims who migrated to Pakistan during painful partition of India by British colonialists, in due course of time, Mr. Hussain appeal reached every nook and corner of Sindh and he became leader of entire Sindh. MQM is supported by Sindh nationalist parties such JSQM and JSMM.

Pakistan is the Terrorist Producing Factory of the world. In 72 years since the formation of Pakistan, Punjabi dominance has converted Pakistan into the most radical country that is producing only Terrorists like that of Lashkar-e-Toiba, Hizbul Mujahideen and supporting Taliban Terrorists. Pakistan Army is committing Genocide of citizens of other occupied nations like Balochistan, Pashtunistan and selling them for Organ Harvesting. Minorities religions like Christians, Hindus, Sikhs are facing extinction as the Christian/Hindu girls are regularly abducted, raped, forcefully converted to Islam and married off to Radical Muslims.

Pakistan is also the cause of deaths of over 2000 US soldiers killed in Afghanistan and over 20000 servicemen injured as Pakistan is supporting the Taliban Terrorists and arming them with weapons to wage a war against Afghan Govt and US/NATO forces.

Only with the Liberation of Sindhudesh and recognizing it as an Independent Nation, all the above problems can be addressed.