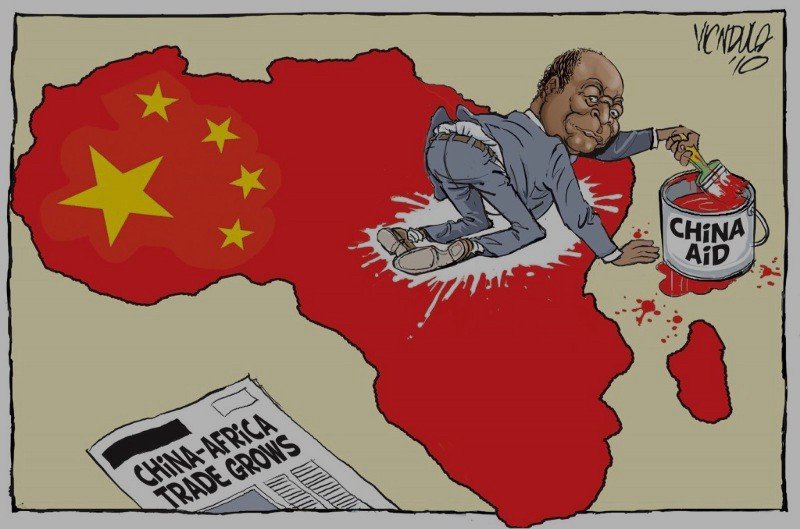 China is the biggest customer for African minerals and has invested billions of dollars in mining operations across the continent. For instance, Guinea and Beijing signed a deal in 2017 involving US$20 billion in loans over 20 years in exchange for bauxite. China has similar arrangements with the Democratic Republic of Congo, the Republic of Congo and Angola. Between 2000 and 2017, China extended more than US$143 billion in loans to African infrastructure projects, more than any other nation, it found.

However, a closer look at the things show that neither the country doesn’t benefit anything from the Chinese investment. For instance, a Ghanian says, “Every time I pass by a Chinese construction site and see Chinese people working it just pisses me off. Why do they have to bring in their own workers when so many young Ghanaians can’t find jobs? It just doesn’t make any sense!

I think if there was poll taken in Ghana or anywhere on the continent of what angers people most about the Chinese in Africa this issue would be #1, by far! I completely understand where you are coming from. In fact, the World Bank just came out with new data that reportedly revealed that 48 percent of Ghanaian young people are unemployed, so you’d think it would only be natural for the government to do more to force Chinese companies to hire local workers as part of the contract for infrastructure projects, right?”

This is a situation all over – in all the countries where the Chinese invest. Chinese bring their men even for menial jobs without benefiting the natives in job creation. The Chinese model is not a job creation or an aid program. It’s pure business. Say, if a Government says they want roads to be built, Chinese say they can build it. But the labour force is actually Chinese. One can actually see this as a way China addresses it’s flagging domestic job market. On the other hand, bringing in people from China inflates the cost of the project. This generally creates a debt on the nation in which infrastructure project is being built.

A combination of these two sends a clear message to the world – China has 1.4 Billion people to feed, Chinese send their people worldwide and set up Chinese colonies so that these people once they gain citizenship, can in future may join politics and their children may rule those countries and literally become Chinese Colonies.

China has been especially successful in Africa and other developing markets with its infrastructure business because it undercuts both local and international competitors, sometimes by as much as 50 percent. For a country like Ghana, with its limited budgets, the so-called “China Price” is the reason why these Chinese companies often win the bids. Chinese companies source everything from their integrated system of financing, engineering, material sourcing, etc. that allows them to build at a lower cost. And yes, part of this is labor, but it’s important to be clear what kind of labor we’re talking about and how much of it they really do import.

Some Chinese construction companies will argue that it would take way too long to hire local engineers and project managers which would also push up the budget. So for specialized managers, they say it’s critical to bring in their own folks to do the job. That makes sense. The far more questionable practice is when they import unskilled labor, often referred to pejoratively by African leaders as “wheelbarrow pushers.” This is inexcusable, even deplorable given the high levels of unemployment in Ghana and elsewhere in Africa.

A Chinese tried to capture the Galamsey operations is an example of how China percolated into every sort of activity in the country, starting from illegal mining to creation of a local mafia and corrupting the political establishment and legal dispensation system. For those who do not know what is Galamsey Operations, click on the hyperlink to check details on the Wikipedia article.

A galamsey, derived from the phrase “gather them and sell”, is a local Ghanaian term which means illegal small-scale gold mining in Ghana. Such workers are known as galamseyers or orpailleurs. We will cover it in details in our next article to Expose China.

An example of how China is reaping its benefits through its Colonial Empire is the support China got over Hong Kong. A quick look at the list of countries which supported China tells that most of them have a percentage of their GDP as Chinese debt, in some cases, crossing even 25% of their GDP.

Racism in China against Africans

China asked the whole world to not use the world “Chinese Virus” or “Chinese Wuhan Virus” that relates China to its deadly virus that has infected millions of people worldwide and killed lakhs of people. Is this not Chinese Hypocrisy to refer the African Horse Sickness (AHS) and not name it with a different name?

People are mad at Trump for calling the corona virus “the Chinese virus” but they’re not mad at China for saying the virus originated in Africa and subsequently allowing their citizens to publicly discriminate and harass Africans in China? …weird— Yazmin (YAZs-MEEn) (@_TheBeautyBruja) April 22, 2020

Watch these Video in this tweet. A South African citizen exposes the Racist attitude of vast majority in mainland China. In other countries when an allegation of Racism is made, it is argued that there are only a few bad eggs, a few nasty ones that hold this racist attitude. However, this kind of open discrimination against Black and Indian People is out in the open among the vast majority of people in Mainland China. 99% people had derogatory remarks to say about the Black people. How Chinese consider all other races as inferior to them. They say “Indian People smell bad”.

In our previous article https://newscomworld.com/2020/04/26/racism-against-africans-ugly-side-of-chinese-hypocrisy/ we covered in details, how Africans and foreign nationals are being subjected to racial discrimination and frequent attacks in China. China that accuses all its enemies and competitors including Italy, France, United States of Racism, has exposed its own Ugly face when it comes to Racism against the foreigners especially the Africans.

Nigerians sue China for $200B over coronavirus pandemic

A group of Nigerians filed a lawsuit against the Chinese government and related institutions over the coronavirus pandemic, local media reported on Tuesday.

According to local daily This Day, 25 Nigerian nationals have moved the high court of Nigeria’s Federal Capital Territory and are seeking $200 billion for losses caused by the pandemic.

Among the respondents named in the lawsuit are the People’s Republic of China, the Communist Party of China, the National Health Commission and the minister in charge of it, and the Chinese Academy of Sciences.

Since everyone knows that Chinese interests in Africa are not only limited to getting resources from Africa, getting employment for Chinese labour, but also to buy votes in African Subcontinent, the votes that are needed by China to take the leadership role in many Unite Nations (UN) organizations, these agencies really aren’t that important but collectively they provide Beijing with an increasingly influential platform to align the international agenda with their own priorities.

The same vote of every African Nation is equal to the vote of Australia, Japan, South Korea, India. Several such votes in favor of China can prevent International Community to take punitive action against China at United Nations for spreading Bio-Terrorism worldwide and killing 605,000 innocent civilians worldwide.

Shouldn’t United States, Europe which has long worked in African subcontinent make use of their ties with the people on ground and expose the Chinese trap laid on the whole Africa? Even though China builds some small projects free of cost in some African countries, but the price that African subcontinent is paying by supporting China at the United Nations will lead many countries worldwide to perpetual slavery of China as it is impossible for many countries like Pakistan that are just seeing the tip of the ice berg but do not see what lies beneath and have subjugated themselves to the voluntary slavery of China.

As we mentioned a group of Nigerians have filed a suit against China for compensation of $200 Billion, if the Governments of the African Nations are buried under Chinese debt trap diplomacy, will citizens in African nations succeed in such law suits? Such law suits require coordination between all Africa countries and all countries together sue China, besides forfeiting the Chinese loans, seizing or nationalizing Chinese assets in their respective countries. Will Free, Independent, hard working and strong people of African nations let their governments to subjugate them to Chinese slavery now?